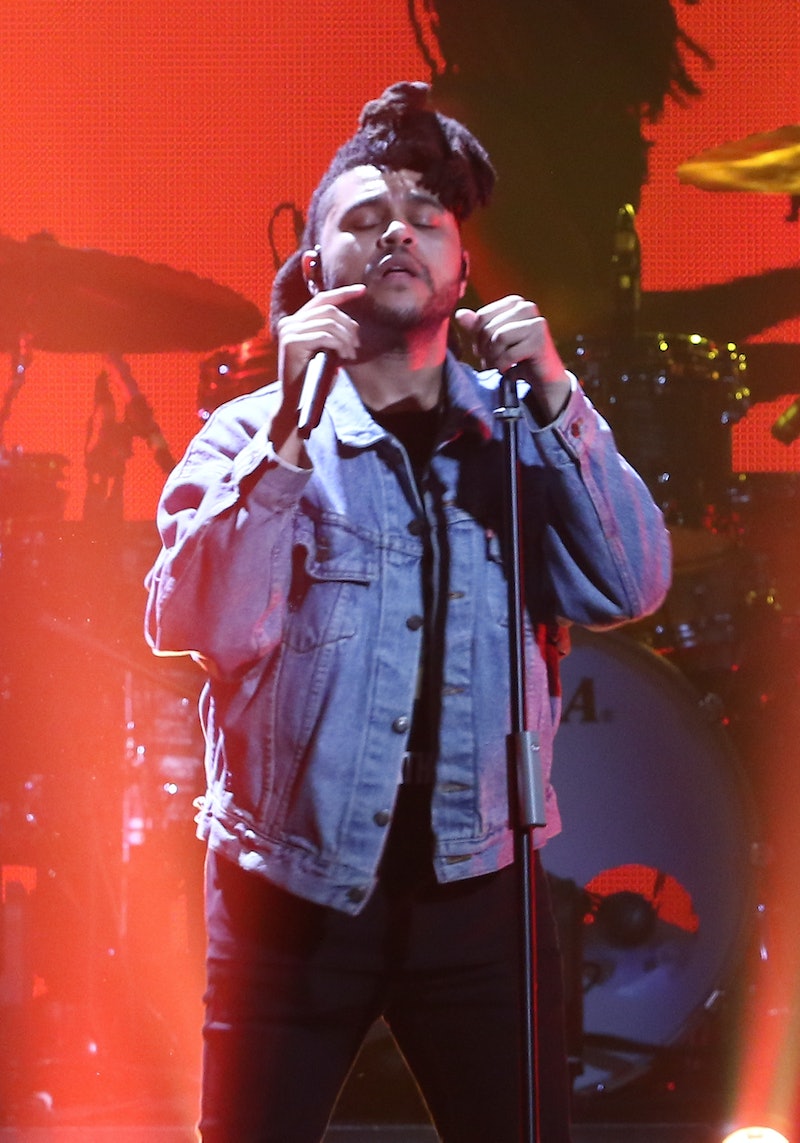 It's amazing to see how far The Weeknd, nee Abel Tesfaye, has come in the past few years. I first heard his laid-back mix of hip hop, soul, and R&B back in 2011 when he released his first mixtape, House of Balloons, and I was immediately into it because it was like nothing I'd ever heard in the best possible way. It was music to drink to, make out to, get downright naughty to (and you can fill in your own definition of "naughty" here), and nearly five years later, that's definitely still the case. His 2015 album Beauty Behind The Madness made him an international success and left fans desperate to see what else he'd do. Thankfully, this Christmas brought us a gift in the form of new music from The Weeknd, and his collaboration with Future called "Low Life" is downright incredible.

The Weeknd released the track, along with another collaboration with Jeremih on the remix of "Pass Dat" — on his SoundCloud page on Christmas Day, and the Internet uproar was immediate. The amazing thing about the songs, particularly "Low Life", is that they're so refreshingly familiar. While many artists feel the need to continually push the envelope for the sake of doing so with less than stellar results, The Weeknd knows what he's good at and he sticks to it, and "Low Life" is a perfect example of this.

Let's check out some of the lyrics, shall we?

I turn the Ritz into a pole house

Go 'head and ash it on the floor now

Girl go ahead and show me how you go down

And I feel my whole body peaking

And I'm f*cking anybody with they legs wide

Getting faded with some b*tches from the West Side

So... basically, we're starting with standard Weeknd fare. Strippers, smoking weed, having sex... does this guy do anything else? It's amazing he has time to record and music, considering how busy he is with all this debauchery. Some would say it's getting old, but I feel like I'll be worried when he stops acting out like this, because something will be seriously wrong.

Repping that low life (turn up)

Generally, when you call someone a "low life", it's not a compliment. However, I don't think that's what he's going for here. "Low life" is less about being a total scumbag and more about... being a scumbag and owning it, or not really caring about the stigma that comes with such a term. He's doing what he feels like doing, and that's all there is to it. He's repping that for every low life out there. Charming!

I been on the molly and them Xans with your daughter

If she catch me cheating, I will never tell her sorry

Porches in the valley, I got Bentleys, I got Raris

Taking pain pills on the plane, getting chartered

So, again, here it's a bit more of the same. More drugs, more sex with people who aren't your partner/promiscuity, bragging about riches. Everything's in order here, no need to worry. Also, he wants you to know that not only does he have all these cars, but he's got enough money to get a private plane. So there!

Popping tags on tags, I was starving

B*tch, I got the juice and carbon

Turn a five star hotel to a traphouse

Roaches everywhere, like we forgot to take the trash out

Flood my cross with ice, getting money my religion

Got my baby momma and my side b*tch kissing

Again, let's reiterate: The Weeknd loves strippers and he'll turn even the classiest of joints into one. He's got drugs, alcohol, and "carbon", which I'm not hip enough to translate into English. He's there to make more money by... turning women into prostitutes, but it's unclear whether or not they're doing this because they love the party lifestyle as much as he does or if he fancies himself as some kind of pimp. Either way, as disturbing and messy as these lyrics are, I suppose it's slightly comforting to know that for everything that changes in life, some things really do stay the same.