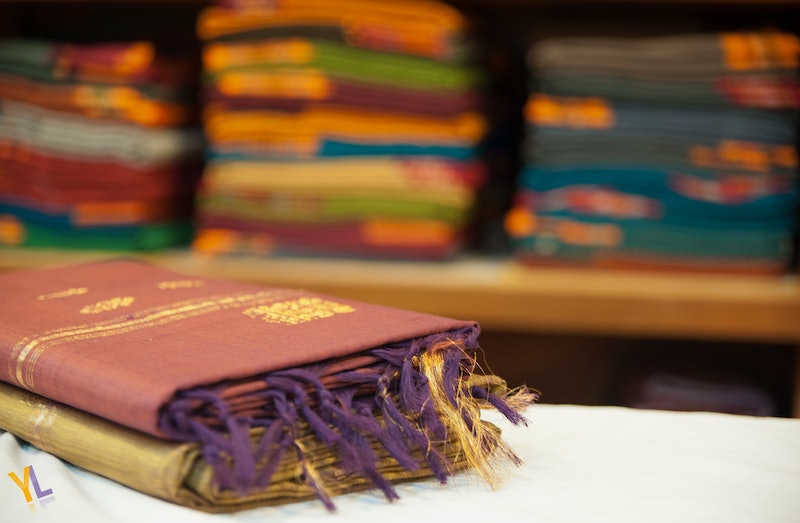 Social media campaigns have arguably been making huge impacts in social discourse as of late, and the #SareeNotSorry campaign is no exception. It's undoubtedly still difficult to be a woman in today's culture, but being a woman of color is a completely different struggle, especially in a post 9/11 society. As Bustle's own Mehak Anwar explained, "When it comes down to it, girls and women get a lot of crap for being girls and women, and non-white girls and women get even more crap for being female and people of color." Hoping to launch a counter campaign to discourage stereotypical and fear culture-motivated views that many folks hold towards Indian Americans, Professor Tanya Rawal started the Twitter campaign #SareeNotSorry.

According to Indian newspaper India West, Rawal, aN Indian American professor at the University Of California, Riverside, began the campaign to "bring attention to the positive aspects of Indian culture." Within the hashtag, she shares images of herself wearing a collection of colorful sarees in different materials and shades, helping combat stigmas and encouraging Indian-Americans to proudly represent their culture despite today's uneasy social climatic.

At first, it wasn't supposed to be a political statement, but rather a teaching experiment. When India West spoke with Rawal on the phone, she told the publication, "My experiment was on what does it mean to be brown and a woman, and I was hoping to generate some questions in the class around being a minority in [America]."

Not only did the resulting hashtag (which others have since begun using) highlight the cultural pride and meaning of the saree (also spelled "sari"), but it is also helping shed light on two huge issues in the United States: Xenophobia and anti-immigration support.

Rawal told India West, "Following Donald Trump’s first Republican debate, I was really taken aback by the anti-immigration sentiment. As if I look like a terrorist and because of that people have the right to question me, and my citizenship becomes questionable."

But how does the saree — what might seem like just a piece of clothing — help teach people to change their stereotypical world views? According to Rawal, fashion is a tool that you can use to negotiate and explain your identity.

She told India West, "Fashion is like race. It’s the first thing that you see about a person. If you see my skin color and you see brown, your immediate reaction to being brown is dangerous, terrorist, and illegal.” In her case, the saree is a way to express that she is proud of her culture; and it also acts as a platform to start a much-needed conversation.

Rawal pointed out that conversations about race issues in the States usually revolve around black versus white, while different minorities are excluded. But according to India West, "Rawal said that Indians in the United States experience a representational crisis, and photos of women wearing sarees sends out a powerful message." It's a reminder that no one should have to choose between two cultures.

She explained, "I am just interested in conveying that, don’t perceive me as terrorist. I am more interested in being seen as an Indian American, because I like being able to be both."

According to India West, Rawal plans to continue this campaign and expand it into other projects come 2016, like creating a podcast that will continue to talk about this intersection of politics and fashion. Here's to hoping 2016 will be a more socially-tolerant, open-minded year.

More like this
Read Dan Levy's Heartbreaking Message After The Club Q Shooting
By Stephanie Topacio Long
Iran Has Issued A Death Sentence Over Mahsa Amini Protests
By Catharina Cheung, Darshita Goyal and Maxine Harrison
It’s About Time Black Girls’s Voices Were Heard – & 'Girlhood Unfiltered' Is The Start
By Paula Akpan
10 Thanksgiving Alternatives You Can Celebrate This Month
By Katie Mitchell
Get Even More From Bustle — Sign Up For The Newsletter