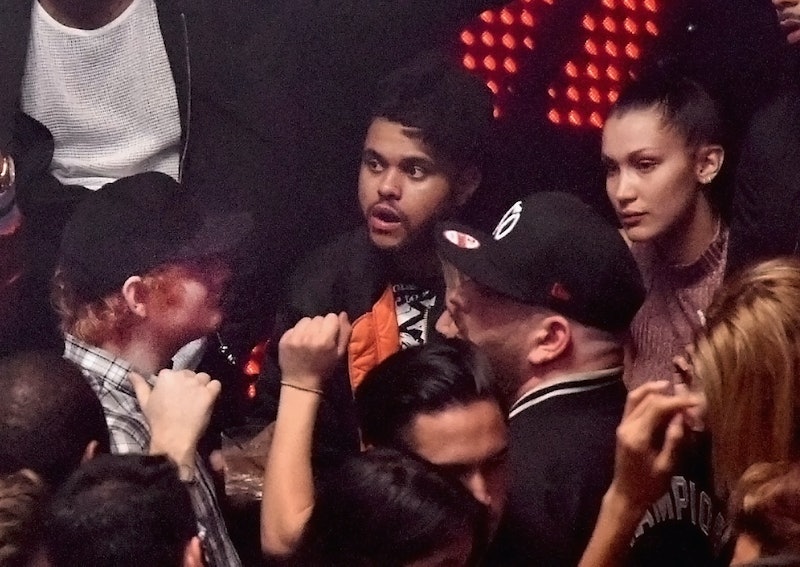 Sad news, fans of a certain model-musician pair: according to E! News, Bella Hadid and The Weeknd are on a break. A source revealed to the site that the duo's alleged split has to do with the craziness of their schedules, which reportedly affected their ability to keep their relationship going. Neither star has commented on the status of their romance, but E! reports that they didn't spend Christmas together, and that last weekend, The Weeknd was spotted flirting with women backstage at his Miami concert.

It's sad to hear that the duo might no longer be together, as they've been dating since the spring. Although a fan account of the couple had already pieced together their relationship long before the two ever went public (it speculated that they may have met in 2013, when Hadid attended a Weeknd concert), they were first seen together at Coachella earlier this year. During New York Fashion Week, they were seen holding hands, and in his Rolling Stone cover story this fall, The Weeknd revealed, “I actually asked her to be on the artwork for Beauty Behind the Madness. My motive was literally to work with her."

While neither have commented on the split, the two visibly spent the holidays apart. Hadid celebrated Christmas in the company of her family (including sister Gigi) at their Beverly Hills home, according to an Instagram posted by her mother, The Real Housewives of Beverly Hills' star Yolanda Foster. Meanwhile, the "I Can't Feel My Face" singer released two new songs on Christmas Eve: "Low Life," a collaboration with Future, and a remix of Jeremih's "Pass Dat."

If the two have truly broken up, it's sad news for fans, although perhaps not surprising considering The Weeknd's past quotes about relationships. Talking to Rolling Stone, the singer expressed his "conflicted, frequently cold view of women and relationships," citing lyrics from Drake's "Crew Love," in which "he brushes off a girl who dares to distract him from his art." A July piece in The New York Times also noted how The Weeknd's seeming emotional detachment has become the wheelhouse of his work, writing, "For an artist who thrived on emotional detachment, love poses a threat." It quoted The Weeknd as saying, ‘‘Probably my and my manager’s biggest fear is if this kid falls in love, we’re done, we’re finished."

Still, it's unclear what exactly happened between the singer and Hadid, and for now, all fans can do is hope they patch things up and get back together eventually.

More like this
Beyoncé & Madonna’s “Break My Soul” Remix Honors A Group Of Black Icons
By Stephanie Topacio Long
Leona Lewis & Husband Dennis Jauch Welcomed Their First Child
By Darshita Goyal
Who Is Camila Cabello Dating? She's Getting Cozy With Lox Club CEO Austin Kevitch
By Radhika Menon
Who Is Bad Bunny Dating? Gabriela Berlingeri's Vocals Are Featured On His Song "En Casita"
By Radhika Menon
Get Even More From Bustle — Sign Up For The Newsletter