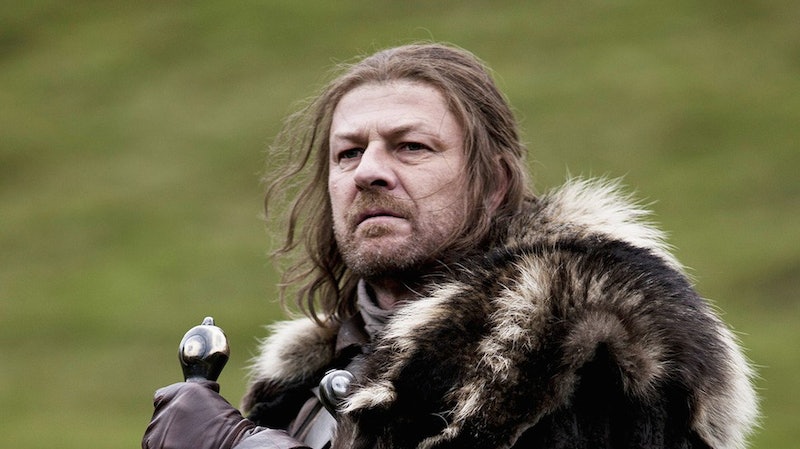 George R.R. Martin, you murderer of so many people that I love, why must you be so cruel? I should have known midway through Game of Thrones Season 1 that you have no problem killing any character that gets in your path. Or more accurately, anyone whose death makes for a more intense story. Ned Stark's death ended up being the catalyst for all the crazy happenings that go on in The Seven Kingdoms, and while without his death fans wouldn't have such an interesting story, knowing that he's gone is still heartbreaking. It makes me wonder what GoT would be like if Ned was still alive — it'd definitely be a lot less depressing.

There's so much to wonder about a world in which Joffrey hadn't been an unforgiving, dishonest, inept child, and if he'd just forgiven Ned, instead of killing him. In a nutshell, things wouldn't be as horrible for the Stark family as they are, and a lot less people would be dead in the wake of Thrones Season 6. Here's what a world with Ned Stark still in it would be like:

1. The Whole Family Would Move Back To Winterfell

Yeah, Ned would take the black but everybody else (minus that Wall-loving Jon Snow) would move back to Winterfell. At least The Wall is pretty close to the castle, so Jon could visit every now and again (that is, if he's alive). Sansa would probably have to stay with the Lannisters because they are evil like that, but she would also at least get occasional visits.

2. The Red Wedding Would Have Been A Nice, Quiet Ceremony

Without Robb Stark having to step up and declare war on the south, there would be no reason for any marriage alliances and no reason for Tywin Lannister and Walder Frey to be sneaky jerks. Robb could fall in love with any gal he chooses, and not get stabbed for it.

With everybody back at Winterfell, Arya's direwolf, Nymeria, surely would have returned from hiding to join the family. And perhaps Nymeria and Grey Wind (Robb's dog) would have added some beautiful new puppies to the Stark collection.

4. Cersei And Jaime Would Still Be Getting Down

Admittedly, these twins kept getting weird quite awhile after Ned's death. But without his death, the intense traveling and betrayal from both of them may not have occurred, and they could have far more time together. Which would be nice for them, if really uncomfortable for GoT viewers.

5. Ned And Jon Would Be Kicking It

Who wouldn't like a buddy comedy about Ned and his bastard son having a ball at The Wall? Those boys would get into all sorts of fun adventures in The Night's Watch. Do I hear cries for an alternative universe spin-off series? No? Weird.

6. Daenerys Probably Wouldn't Be As Successful

Finally, here's a positive. With the death of Ned, it can be agreed that everything in Westeros went awry. With the royalty all up in a tizzy in King's Landing, the plebs got more restless elsewhere, and it'd be hard for anyone besides top leaders to take charge. Even with dragons by her side, a girl, no matter how bols, would probably not be as successful with her campaigns.

7. We Wouldn't Be Quite So Creeped Out By Littlefinger

Maybe fans would still hate Petyr "Littlefinger" Baelish because even in hypothetical world where Ned is still alive, he sold our hero down the river. But perhaps he wouldn't have gone after Lysa Arryn or have been able to murder her, because he would have still been hung up on Catelyn like the creepy little friend-zoned weirdo he is. Also he wouldn't have been able to bother Sansa, which, I think we can all agree, made him one of the skeeviest characters in television.

Everything would still be messed up: the Lannisters would still be running the show with all their psychotic evilness and as Cersei says, "when you play the Game of Thrones, you either win or you die." But at least the Starks would have each other to get through it. *Sniff*