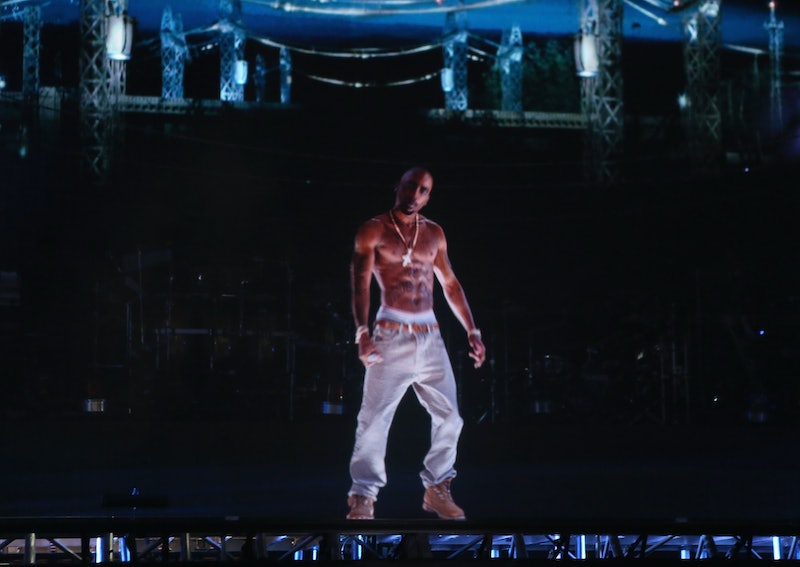 Big news for rap fans: All Eyez on Me , the upcoming biopic about Tupac Shakur, has just cast its leading man, according to Variety. Newcomer Demetrius Shipp, Jr. will play the iconic musician, and production is already underway; the movie has started filming in Atlanta, with music and commercial director Benny Boom as director. The biopic, which doesn't yet have a release date, also features Jamal Woolard as Biggie Smalls, a role the actor also portrayed in 2009's Notorious.

Although the casting announcement of Shipp, Jr. as Shakur might seem sudden, production company Morgan Creek has been developing the project since 2011, although it hasn't been an easy road. According to Variety, the studio was forced to begin shooting by the year's end or face having the music rights to Shakur's work revert back to the rapper's mother, Afeni Shakur, among other troubles. Hopefully, the casting of the film's lead actor and the start of production will be the end to its struggles, and All Eyez on Me will have a smooth road ahead.

The new film won't be the first time a movie has portrayed the late Shakur on-screen, but it might be the most ambitious attempt yet. In August, the the NWA biopic, Straight Outta Compton, was released to critical and commercial success. That film featured the rapper as a supporting character, portrayed by Marcc Rose. Like Straight Outta Compton, which takes its name from NWA's debut album, All Eyez on Me is named after Tupac's fourth record, which was counted among Billboard's best albums of the decade. Only time will tell if the upcoming biopic can follow in the massively successful footsteps of Compton, but judging by the fan love Shakur still has years after his death, it definitely has promise.

And '90s-based biopics do seem to be all the rage these days. All Eyez on Me reflects a recent trend towards biopics delving into stories from that decade, including the upcoming series, American Crime Story : The People v. O.J. Simpson , which casts Cuba Gooding Jr. as O.J., Selma Blair as Kris Jenner (then Kardashian), David Schwimmer as Robert Kardashian, Sr. and John Travolta as litigator Robert Shapiro. The Unauthorized Saved by the Bell Story , meanwhile, promises a rare behind-the-scenes glimpse of the iconic show, partly based on a memoir penned by Saved by the Bell's own Dustin Diamond, who played Screech. Then there's this piece of news: Master P announced that his self-produced biopic, Ice Cream Man, will be released in 2016. Clearly, All Eyez on Me will have its share of competitors upon its eventual release – best of luck to the exciting new film.

More like this
How To Stream 'She Said' In The UK
By Maxine Harrison
The Meaningful Easter Egg In The 'Black Panther: Wakanda Forever' Soundtrack
By Grace Wehniainen
You’ll Be Able To Stream Bullet Train Before The Holidays
By Arya Roshanian and Radhika Menon
J. Lo Just Announced A New Album — And Ben Affleck Inspired At Least 1 Song
By Stephanie Topacio Long
Get Even More From Bustle — Sign Up For The Newsletter