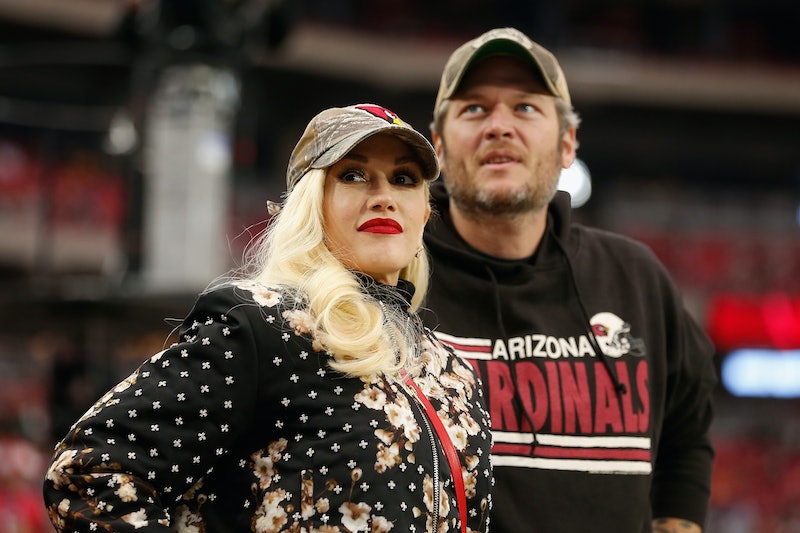 The Voice may have ended its ninth season earlier this month, but the love ballad of Blake Shelton and Gwen Stefani is just heating up. The rock star and country crooner couple seems to be making their new love known everywhere — from kissy videos on Twitter to a football game. Yup, Blake Shelton and Gwen Stefani went to an Arizona Cardinals football game — and their adorable social media photos from the outing have scored a touchdown (sorry, couldn't resist that one). Shelton and Stefani flew to the Cardinals home turf at the University of Phoenix Stadium to see Shelton's beloved Arizona team play the Green Bay Packers.

While Shelton and Stefani paid attention to the game (and each other), all eyes seemed to be on them attending the event along with thousands of other football fans. The couple kept it cool and casual during the game, where they took selfies, hung out with comedian David Spade, and wore matching camouflage hats (aww!). Shelton and Stefani also sported camouflage earlier in the week when they posted a PDA-filled Twitter video, in which Shelton repeatedly kissed Stefani's cheek. You wouldn't think it could get cuter than that, but it does, because Stefani showing her interest in Shelton's favorite football team is just the proof everyone needs to know this is a cute couple built to last.

Here's a rundown of Shelton and Stefani's best snaps from their Arizona football outing.

Stefani snapped this selfie with Shelton and friends on the way to the game. She looks so excited!

Hanging Out With David Spade

Even the comedian couldn't resist taking a break from watching the game and getting a pic with the universe's current cutest couple.

Finally, getting some actual football watching into this date.

But Then They Were Off Being Cute Again

Stefani and Shelton just couldn't keep their eyes off each other, it seems.

They Waved To Fans

Because their love is so friendly and approachable, too.

Shelton Posted With A Siren

And he looked mighty proud of it. (Stefani retweeted the photo, so it looks like she was proud of it, too.)

Stefani was well-aware of the attention she and Blake got from attending the game and posted this video, which shows a bunch of photographers on the field only paying attention to her and Blake. It's a random, yet very meta clip from the rock singer. Is she calling attention to our celebrity obsessed culture by posting this? Or merely reveling in being the center of attention with her new love?

Either way, it appears that their love is here to stay.