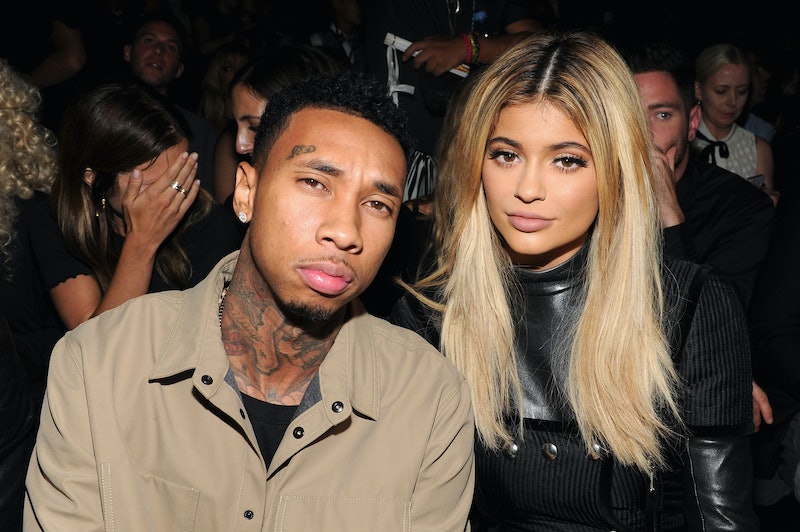 There was no shortage of celebrity romance drama in 2015. After the summer where it seemed like every celebrity couple was breaking up, I was honestly getting a bit nervous that there was something in the water in Hollywood. I mean, this year saw the demise of some of the longest (and most beloved) celebrity romances of all-time: Gwen Stefani and Gavin Rossdale (nooo!), Jennifer Garner and Ben Affleck (tears!), and the worst of all, Miss Piggy and Kermit (get me a gallon of ice cream, stat!) and it's hard to get over it — if the most beautiful and successful couples can't make it work, what does that say for the rest of us normal people?

That said, with a bunch of newly single celebrities on the market, there was bound to be some crazy hookups on the horizon. This year definitely didn't disappoint. From brief flings, to couples already talking marriage and children (looking at you, Ciara and Russell Wilson!), we're heading into 2016 with a slew of new romances and ones that didn't even make it to a New Year's Eve party (sorry, Joe Jonas and Gigi Hadid!). Here are the craziest celebrity hookups of the year.

I have to admit I was point-blank devastated when Stefani announced her divorce from Rossdale, and shocked when Shelton split with his wife of four years, Miranda Lambert. Both couples seemed so in love and so right for each other that it was hard to picture them with anyone else. That is, until the country king and the "Rock Steady" mama shook everything up when they admitted they'd been hooking up back in November. They seem to be head-over-heels for each other, so only time will tell if everything we thought we knew about rebound love is wrong.

Despite a 15-year age difference, I actually thought Barker and Ora made sense as a couple when they confirmed that they were dating in September. They're both edgy musicians — he with an affinity for tattoos and she with an affinity for see-through tops and bright red lips — and they probably would have made a pretty sexy duet together. But alas, true love it was not, as the couple split after only a few weeks together.

These two dodged romance rumors dating back to October 2014, but it didn't become official until the summer of 2015. Hadid even admitted that Jonas had asked her out back in 2010, but she said no, because she was only 13 and it was a school night (aww!) so their young romance seemed all the more sweet. They appeared in public together a few times and even garnered the fan nickname "G.I. Joe" but ultimately didn't make it through the fall. They split in November.

Though there's a bit of an age difference between them (he's 25 and she's 19), this pairing is one of the hottest of the year. The musician (real name: Abel Tesfaye) admitted to Rolling Stone that he was dying to meet Hadid, so he asked her to appear on his album! "I actually asked her to be on the artwork for Beauty Behind the Madness," Tesfaye said. "My motive was literally to work with her." But when Hadid declined, "I was like, 'All right, cool — we can meet up face-to-face. It just kind of fell into my lap. If this had happened two years ago — well, she couldn't." (Two years ago, Hadid was just 17 years old.) "But if I'd met someone two years ago, I probably would've f*cked it up. But I'm more — how do I say it? — clear-thinking now." Now the couple is making super hot music videos together, and surely ready to steam up 2016.

It's true that this pairing is hardly shocking (after all, they're both gorgeous and successful in their respective careers — she's an R&B hit maker and he's a quarterback for the Seattle Seahawks) but what's most shocking is how quickly they've turned serious. They began dating in April, and openly discussed that Wilson's religious beliefs meant they'd abstain from sexual intercourse, and by September Ciara said they'd already discussed having kids. She told E! News, "I definitely do [want more kids], yes," adding, "We discuss a lot of things [laughs]. A lot of good things!" Well, good for you both and we're hoping you have many happy years ahead!

I totally scratched my head when news surfaced that the youngest Jonas brother and Hudson were spotted at Disney World together in September, but then realized how much sense it actually made. Sure, she's 36 and he's 23, but he has admitted to loving older ladies in the past because they "know what they want" and who could blame Hudson for wanting a hot younger guy?! It seems like this was just a brief fling if anything, but they'll always have memories of Mouse ears and Churros.

This one's only shocking because Swift has spoken at length about the demise of her past relationships (see: basically any Taylor Swift song ever written) that I fear for Harris should they ever break up... but for now, these two are totally on. They've already dodged some split rumors, but they look like they'll be ringing in 2016 together after recently celebrating Swift's 26th birthday in a Christmas-themed extravaganza. Happy holidays, you two!

One of the most shocking and controversial couples of the past year, this duo has been rumored to be dating for several years, though they insist they were merely "just good friends" until recently — and soon after Jenner turned 18. They've also dodged many rumors of wild fights, infidelity, and even an engagement, but they seem to be going strong and taking it ... slowly?

Delevingne is one of the most popular models out there right now, so it's no surprise that her dating life is newsworthy. It's rumored that she started dating singer-songwriter St. Vincent sometime in 2014, but they went public as a couple in 2015. Delevingne told Vogue back in July of 2014: "I think that being in love with my girlfriend is a big part of why I’m feeling so happy with who I am these days." I can't confirm if she's talking about St. Vincent, but it's awesome to see her so happy!

Though they only confirmed their relationship in the spring, these two have already garnered a nickname (that's Omeeka, guys) and stirred up plenty of drama, including a few social media hip hop beefs (you mad, Drake?) and a potential engagement. The couple gave their first joint interview to GQ back in September, and Minaj had this to say: "I definitely think we have a normal relationship off-camera. We're like any other couple in the hood." So there you have it. Minaj has been sporting a pretty huge diamond on that finger as of late, so it's possible wedding bells are on the horizon.

Lots of people are shipping for these two to actually be an item, but so far, all we've heard are denials. I'm low-key obsessed with them, and hope they really are a couple just playing coy, because they're too cute not to be together. When asked at a press conference whether Drake was her "lucky charm," Williams said, "We've been friends for, like, so many years… Just like family." Say it ain't so, girl. Only you can make his "hotline bling."

THESE TWO. I know a lot of people find this possible coupling very odd, but I'm kind of in love with it. Kardashian split with her longtime boyfriend Scott Disick this summer, and I'm all for her rebounding with the Biebs. Bieber has been a longtime family friend of the Kardashians, and he's already in with Kardashian's three children, so it makes sense that they'd be comfortable with each other. It's still only a rumor, but maybe he really does want to be her "boyfriend." (Ugh, I'll see myself out with that one...)

I find this one to be a pretty incredible tabloid rumor that likely holds no water, but reports are saying that the two are enjoying a "secret romance" and that they were caught kissing in the bathroom at their siblings' 2011 wedding by Pippa's sister Kate Middleton. They've reportedly been secretly flirting ever since. Hey, stranger things have happened... I think...

The former One Directioner and the supermodel both recently separated from their respective relationships (she from Jonas and he from Perrie Edwards) this year, and now they're turning heads as the unconfirmed hottest new couple in Hollywood. No word on if it's even a real thing, but fans of the British singer are divided — some love this couple, and others are downright pissed.

After divorcing Tom Cruise in 2012, Holmes has been linked to Foxx on and off for nearly two years (!!) — though they've yet to confirm any romance rumors, the two have been spotted together as recently as Foxx's 46th birthday party in December. They have been longtime friends, so even though it seems like a random pairing, perhaps true love is in the making.

Though this is a relatively new rumor, Gomez and Horan have been spotted together on numerous occasions. Perhaps she's trying to make Bieber jealous... or perhaps she and Bieber have been dunzo for a long time, and we're all just looking too far into something that just isn't there. Either way, I say, get it girl. You're young and successful — have fun! That's what it's all about anyway.

Here's hoping that 2016 brings in even more crazy hot celebrity pairings. Love is in the air!