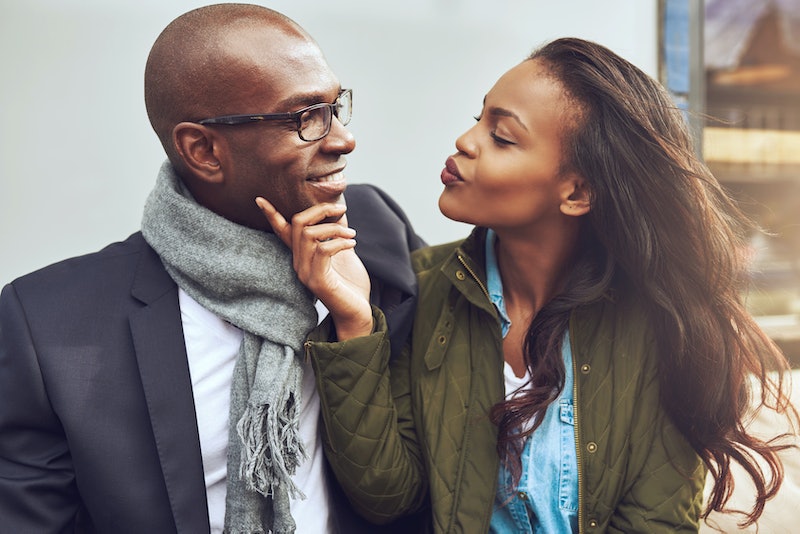 I completely understand if it's not something you want to say all the time. Not everyone is comfortable saying it, or expressing their emotions generally. What I will say is that it's helpful if you're with someone who's on the same page about saying it. One of my best friends dated someone for years who only said it occasionally. Which was fine, at first, but became wearing. I have another friend who only says it on special occasions, but both she and her boyfriend like it that way. Being with someone who is as expressive as you are— whether that's a lot or a little, both are fine— may end up easing some tension along the way.

But that's actually easier to do than you might expect. I looked around into how often couples say the L word, and instead of being all over the map, there were definitely two major camps— people who say it all the time and people who hardly say it all. Neither is wrong, neither is right. But for the people that say it, they really, really say it:

1. Whenever You're Feeling Mushy

Hey, it happens. Sometimes you're just feeling super overwhelmed and want to let it out.

2. Enough That They Really, Really Know It

YOLO, guys. And it's true, I think, as long as it's not disingenuous, too much is better than too little, especially if your partner is the type who needs it to feel appreciated.

3. Literally All The Time

Some people don't need a special overwhelming reason to say it. You can say it all the time and still feel like it's special all the time.

4. Even When You're Angry

When thinking about how often to say it, it's important to remember that withholding saying it shouldn't be used a as a weapon. If you say it and someone doesn't say it back, it's an awful, awful feeling. So even when you're fighting, you should still say it, especially if you're a couple that says it a lot.

5. Even When You've Been Burned Before

It seemed like if you're someone who says it, you're saying it once a day. At least. Sometimes way more. And it's awful when you do see it becomes a tool in a fight but, as this post shows, just because it's put you in a vulnerable position or you've been hurt before, doesn't mean it should carry through into your next relationship.

Bottom line? You should say it as often as works for you, but I mean you both— you as a couple. If one of you is a bit less vocal, but one of you really needs to hear it, you have to meet in the middle. And if you're in the habit of saying it, it doesn't make it any less special— at least once a day is a good reminder and let's your partner feel settled and secure.