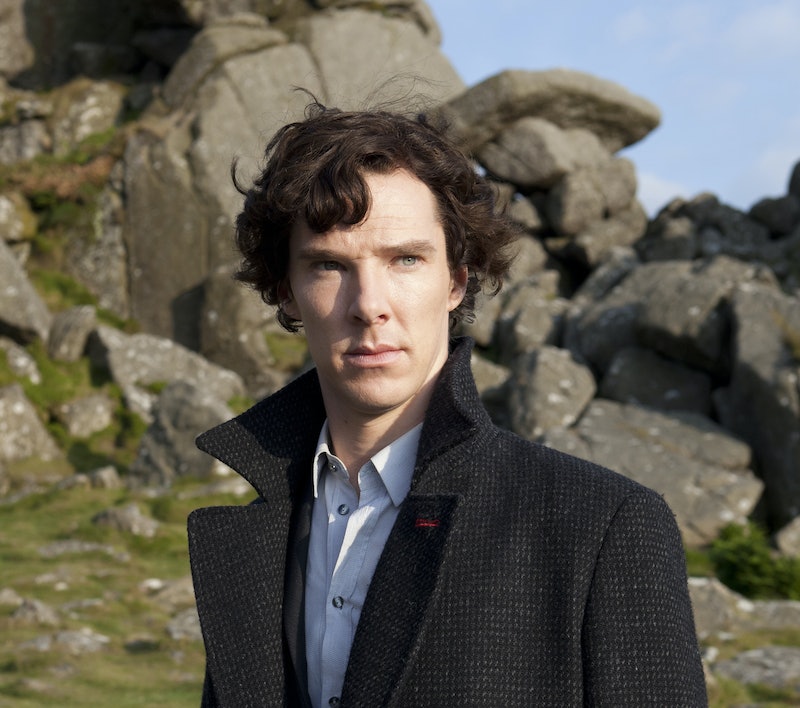 If you're a big fan of Benedict Cumberbatch (and dare to identify with the name "Cumberb*tch"), then odds are you must be anxiously awaiting the premiere of the Sherlock Christmas special: The Abominable Bride, airing for the first time on New Year's Day 2016. However, despite all of that excitement, it's officially time to start getting ready for yet another project featuring the actor: Marvel's Doctor Strange , starring Cumberbatch in the title role. Although the movie is not yet done filming, Entertainment Weekly has provided a first look of the star in his costume, and Cumberbatch fans, get ready to freak out.

Especially because of how familiar Cumberbatch-as-Doctor-Strange might seem. Although there's a great deal of magic at play, the actor's character actually doesn't seem to be too far off from his famed character of Sherlock Holmes. According to EW, the film's plot is said to revolve around "a self-centered surgeon" who transforms into "a world-protecting sorcerer," and according to IMDB, the change is due to a "sorcerer" who takes him under his wing and trains him to defend the world against evil." Which tells you one thing: Cumberbatch is going to nail this role. Considering his experience playing the wise but arrogant Sherlock Holmes, as well as his past experiences with special effects in films such as Star Trek and The Hobbit, there's really no one better that I can imagine playing Doctor Strange than Cumberbatch himself. Seriously, look at how amazing he was just playing a friggin' dragon:

So, what's known about his latest character thus far? Well, it apparently requires just as much physicality as Cumberbatch had to use in some of his past roles. In fact, it may be the most difficult part he's taken on yet, due both to the physical aspects and the mental challenges. “I’m still in the infancy of learning all that [spell-casting]. It was like, okay, I’ve got to keep throwing these poses, these spells, these rune-casting things, everything he does physically," he told EW. "I’m thinking, there’s going to be a huge amount of speculation and intrigue over the positioning of that finger as opposed to it being there, or there. And I’m still working on that. We haven’t played any of those scenes yet. I felt really self-conscious. But, then, by the end, it was great. It’s like anything, you just have to experiment."

Ugh, so excited! I'm confident Cumberbatch will be perfect in the role. If you, however, still need more convincing, a look at Entertainment Weekly's double-issue featuring a full-costumed Doctor Strange should do the trick:

Marvel's Doctor Strange is set to hit theaters Nov. 4, 2016. Get ready, everyone.