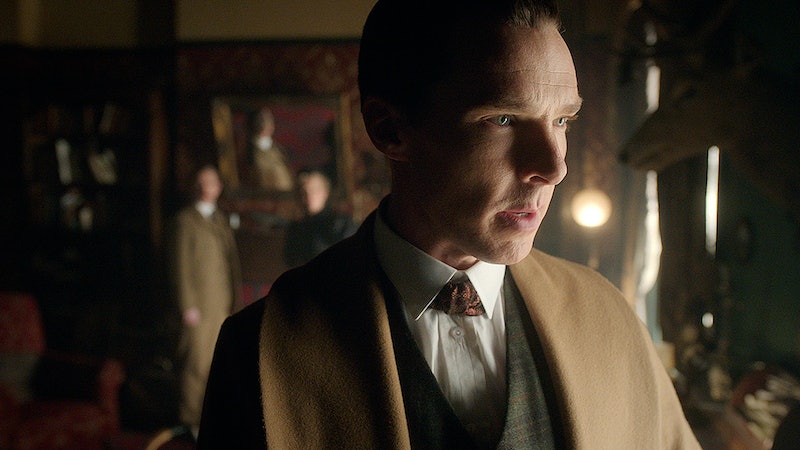 Is it New Year's Day already? Not because of, you know, the imminent champagne hangover, the resolutions, et al., but because of Sherlock. Specifically Sherlock: The Abominable Bride special, which premieres none other than New Year's Day on BBC One and PBS. Thankfully, to hold us over until then, the BBC has provided some promo pictures. And, even more thankfully, we can learn so much from them!

The special, written by Steven Moffat and Mark Gatiss, will feature Sherlock and Watson doing Sherlock and Watson things (solving crimes, rolling their eyes at each other, walking in the street), but in a whole different time period. As in, the 19th century (#TBT). And! And with some — dare I say, impressive — mustaches to boot. (OK — just Watson has a 'stache, but I like to envision a scenario where they both do, obviously.)

Steven Moffat told Entertainment Weekly in March that "The special is its own thing," which confirmed previous theories that The Abominable Bride would be a one-off episode that doesn't include previous plot lines from the series. Which leaves any guess on what The Abominable Bride is about, as a shot in the dark. A mystery, if you will.... So, in the spirit of solving mysteries, here are 6 things that we can deduce from these promo photos, re: the special. Sherlock would be so proud, wouldn't he?

Deduction #1: It Will Be Cold

While this might seem like a superfluous — and obvious — deduction (we are in London after all!) perhaps some of the plot points will have to do with the chill.

Deduction #2: Sherlock Gets a Haircut

Or he got his hands on some gel. Either way, this is a new look. Maybe it signifies a change for Sherlock as we know him.

At the most, it will aggravate him and inform his decisions; at the least, it will be something Sherlock endlessly mocks.

Deduction #4: Mary Has a Secret

Watson's wife looks like she knows something that Watson and Sherlock might not. Which would be both unprecedented (no one knows more than Sherlock), and a joy to witness.

Deduction #5: Mrs. Hudson Will Provide an Invaluable Piece of Information

All I see is Mrs. Hudson gracefully opening the door to Sherlock's apartment with a smile on her face, and that can only mean one thing: That she's here to save the day, of course.

Deduction #6: The Abominable Bride Is Someone We Know

Why else would they hide her face?! Is it Mary? Is it... Molly Hooper? It has to be one of those two, and honestly, my vote is on Molly.

All right, maybe I can't deduce as much as I thought. I'll leave it up to the professionals and see what mystery they solve, come January 1st when The Abominable Bride special premieres on BBC One and PBS.