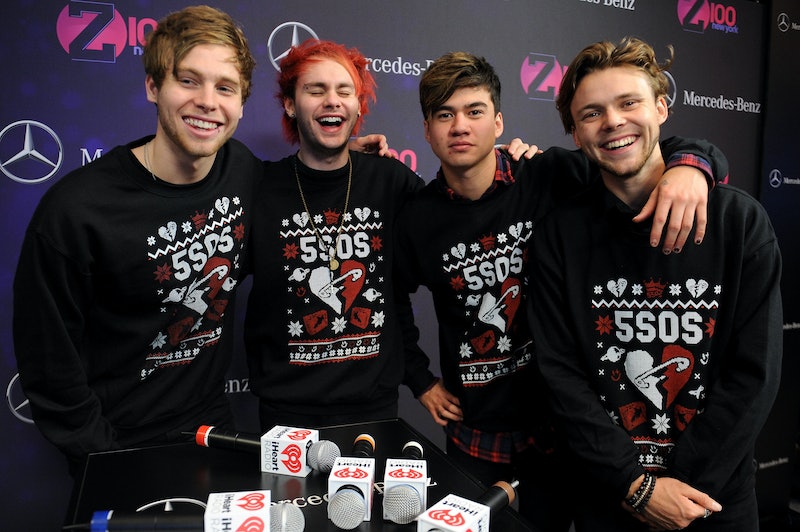 5 Seconds of Summer fans thought they were getting the world's greatest Christmas present in the form of a candid, all-four-band-members-are-naked-on-the-cover-of- Rolling Stone interview that went live on Dec. 25. But it didn't take long for fans to realize that the whole thing basically turned out to be one big-ass lump of coal, and proceeded to call out the band for what they see as sexist remarks and demanding that they speak out about the interview. The backlash from 5SOS' Rolling Stone interview is intense — particularly because it seems like everyone but the band has addressed the issue.

As an embarrassingly big 5SOS stan myself, I was sorely disappointed to read some of 5SOS' quotes, which included things like Ashton Irwin seemingly dissing their own fans ("We don't want to just be, like, for girls. We want to be for everyone. That's the great mission that we have. I'm already seeing a few male fans start to pop up, and that's cool") and Luke Hemmings "smirking" about having sex with multiple women ("When you put four young dudes on a tour bus, playing theaters, then arenas, you're going to have sex with a lot of girls, I guess," he told the magazine, repeating the phrases "the possibilities are high" and "the possibilities are endless" when asked about "multiple girls" in one night and "multiple girls" at one time.)

Countless fans, refreshingly willing to call out their favorite band for their poor choice of words, have taken to Twitter to demand that the band speak out about this interview. And though the guys have yet to address the situation in any real way, pretty much everyone close to them has, including Hemmings' girlfriend Arzaylea and both of his parents.

Arzaylea, who is confirmed as Hemmings' girlfriend in the article and is quoted as saying, "I'm an Internet influencer. I just post pictures. It's really easy," was one of the first people close to 5SOS to discuss the article, tweeting:

It also seems as if Hemmings' entire family has weighed in on the interview, with his brother Jack sharing this:

His mother, Liz, linking off to a fan analysis of the article and saying this:

And his father, Andy, giving perhaps the most definitive response by writing this:

Michael Clifford has so far been the only band member to make any reference to the article whatsoever, tweeting this vague, semi-apology-of-sorts on Christmas Day:

...which he then followed up with a tweet to Justin Bieber, who passive-aggressively called out the guitarist for dissing him in the interview:

Bustle has reached out to Rolling Stone for comment on the claims from Clifford and Hemmings' family, but has not yet heard back.

Fans, obviously upset that this is the only response they are getting from the band so far, have voiced their opinions loud and clear:

And, as always, some claim that "management" is not allowing the guys to address the matter:

While it may take a few days to craft the perfect PR-friendly response to the article (one that doesn't severe ties with RS but also appeases the fans), it's clear that this is not an issue that is going away and that the band needs to make a statement. 5SOS (and their entire publicity team) should be addressing their comments and fans' opinions.

Not only for the sake of their image and their career, but for the fans — the reason they are literally able to do what they do — who have been disrespected by the interview. End of story.