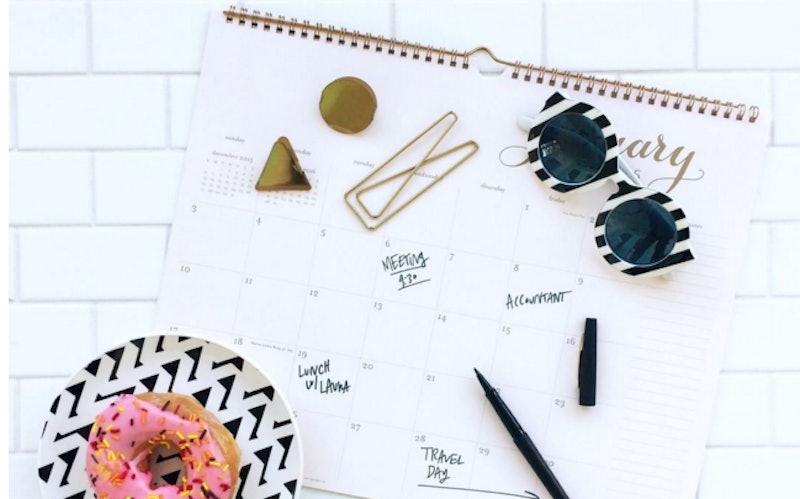 Some people can be counted on to come over right on the dot, but others have quite a hard time figuring out how to be punctual. It's almost like a secret riddle you just can't crack — how, exactly, do you show up early somewhere? What about all the traffic jams and train delays, or the last minute wardrobe changes or annoying clocks that speed up time when you weren't looking? Do people not juggle to-do lists? Do they have an alarm that's constantly blaring?

If you're a chronically late person, this all can sound like a magic super power. And while it's true some people are just born with an internal ticking clock that gets them everywhere on time, the reality is most of us are just mindful to be the same. Being late happens, but if it's a chronic habit then it's obvious there's room for improvement. If you want to learn how to be a punctual person and kick your "I'm 10 minutes away" bad habits, then read ahead. Below are seven ways you can become punctual when you're so not.

1. Admit You Have A Problem

It's hard to change a bad habit if you don't actually think you have a bad habit. If you think that being late is just a cute quirk of yours but, fine, you'll try to change and actually arrive on time for drinks this Saturday, you won't get very far.

According to lifestyle writer Marelisa Fábrega at wellness blog Daring to Live Fully, "Realize that it’s not a cute or quirky character trait. Instead, it’s a habit that’s having a negative impact on your career, on your business, and/or on your relationships." Admit that you holding every social or professional meeting up with your tardiness is never appreciated, and figure out if you want to change it or not.

2. Show Yourself The Benefits Of Changing

How many times have you vowed to be punctual? And how many times has it actually panned out? Part of the problem might be because you don't actually believe the change might bring any benefits to your life. We're creatures that like to get rewarded for our efforts, so sit down with a pen and paper and write down all the reasons changing will improve your life.

Fábrega explained, "The more reasons you have for wanting to adopt a new habit, and the stronger those reasons are, the more likely it is that you’ll be able to make the new habit stick." Maybe being on time will cut down on stress, will make you feel more organized, or it won't have to make you do that pained-smile thing as you walk towards your friend who's been waiting alone for the past 30 minutes. Show yourself what you'll be gaining and you'll feel more motivated to take the change more seriously.

3. Give Yourself Buffer Time

A lot of times tardy people are late because they don't schedule any buffer time. They just plan to show up on the dot, which throws a wrench into their plans when unforseen things like traffic or no parking spots happen.

Diane DeLonzor, researcher and author of Never Be Late Again: 7 Cures for the Punctually Challenged , told business site Fast Company, "Late people get stressed out from being late, too, but they don’t strive to be early; they tend to time things to the minute." Give yourself a 20 minute buffer and you'll avoid rushing into your meeting or date feeling harried and tumbling over excuses.

4. Be More Organized About It

Being on time takes some organization and adjustment — for example, if you end up being late for a specific meeting because the building had a crammed parking garage or because the train delayed on that line, you need to plan around those possibilities next time. You can't just hope that they'll be avoided and everything will be fine.

DeLonzor pointed out, "Instead of thinking about why their routines don’t work and trying something different next time, chronically late people simply hope that tomorrow will be better." Do things that'll prepare you for those delays — like getting your outfit and bag ready the night before to run out the door early, or leaving 15 minutes earlier than last time to avoid those glitches.

Chronically late people often times cram too many things into their to-do lists, thinking that certain tasks will take way less time than they actually do. That's exactly why they become an hour behind schedule and lose their timeliness. Be realistic about your to-do list and don't be afraid to say no to some things.

Fábrega offered, "One reason why you may have a tendency to be late is because you simply have too much to do. If your schedule is unrealistic, how can you possibly be on time for anything?" After all, there are only so many hours in a day. Organize your to do list by priority, so that everything at the end of the list is a task that could be done the day after if you run out of time before an appointment or meeting.

Want a sure-fire way to keep yourself punctual? Schedule everything you agree to meet up for 10 minutes earlier in your planner. That way you'll always have that buffer time, without even thinking about it. Lifestyle writer Dustin Wax at Lifehack suggested, "Put your 1:00 appointment into your schedule at 12:50, for example." Once it's in the planner, you're not going to mess with it. You'll just automatically have that buffer time.

7. Redefine What It Means To Wait

A lot of us hate showing up earlier because we feel like it'd be a waste of time: If you're left there sitting at the restaurant 15 minutes before your friends, you could have been doing something more productive with that time at home. But that doesn't need to be the case.

Brett & Kate McKay at self-help site Art of Manliness offered, "If you’re someone who doesn’t like to arrive even a minute early because you feel waiting time is wasted time – either because it’s boring or you could have been doing something else you like – redefine wasted time as your guilt-free, luxury time." See your in between waiting time as a chance to unwind and just chill, giving you an opportunity for some much needed me-time.

As you can see, becoming a punctual person doesn't have to be this whole personality overhaul. With just a little bit of planning you can be as on-time as the best of 'em.