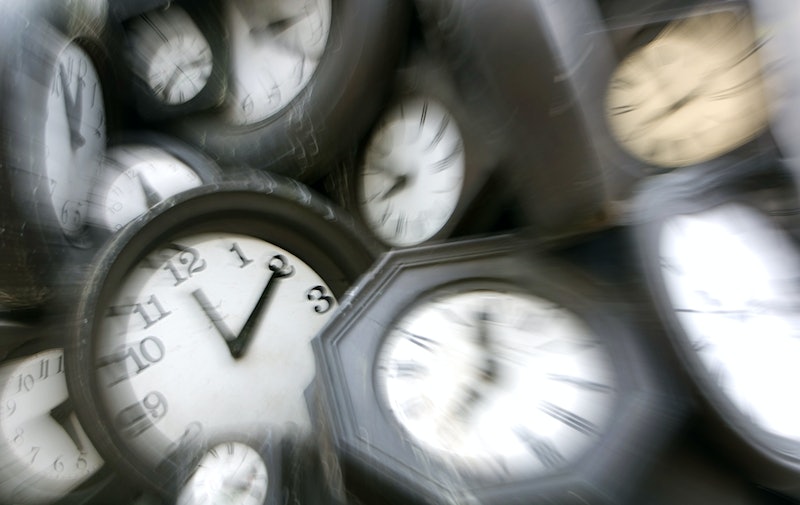 Like most highly organized people, I am almost never late for anything. I have also never been able to understand exactly why other people are always late — but hey, guess what? It turns out there's a scientific reason for it: Type A people and Type B people may actually experience time differently. To be clear, it's still not an excuse for always being late (perhaps the strongest indicator that I'm a Type A person is the fact that as far as I'm concerned, the only acceptable excuse for lateness or failing to meet deadlines is an act of god) — but knowing why it's happening can be useful for people on both ends: It can help Type B people manage their lateness, and it can help Type A people not get bent out of shape when they're left waiting.

The research in question isn't new; it is, however, making the rounds again — and since timeliness never goes out of style, it's definitely worth taking a look at again. According to the Wall Street Journal, Dr. Jeff Conte led a number of studies in the early 2000s that demonstrated some fundamental personality differences between people who were always on time and people who were always late. One of them, which was published in 2002 in the Journal of Applied Social Psychology, asked 118 emergency room nurses — that is, people who “typically face high time-urgent demands” — and 145 small-town librarians — people who “typically face low time-urgent demands” — to estimate how long a minute lasts. The nurse estimated on average 58 seconds, while the librarians estimated 77 seconds. From this, the researchers determined that Type A people tend to have more accurate internal clocks — hence why they're often not only on time, but early. Type B people, with their more relaxed sense of time and urgency, tend towards lateness.

Obviously this isn't the only factor that can contribute to someone being late or early, but I think it's worth bearing in mind. Even knowing that some people experience time differently than other people, though, that doesn't leave either perpetually late people or habitually punctual people off the hook for their behavior. Both types can cultivate qualities that will make coping with lateness easier — either by putting in the effort to be on time, or by developing strategies to help you not fly off the handle when someone else is late.

How Type B People Can Cultivate Punctuality:

How Type A People Can Cope with Lateness:

More like this
6 Abortion Advocates To Follow On TikTok
By Sara Youngblood Gregory
The Best Underwear For Sensitive Skin, According To A Dermatologist
By Alexa Vazquez
How to Delete (or Pause) Your Hinge Account
By Emma Carey
How To Fight For Reproductive Rights, Based On How Much Time You Have
By Courtney Young
Get Even More From Bustle — Sign Up For The Newsletter