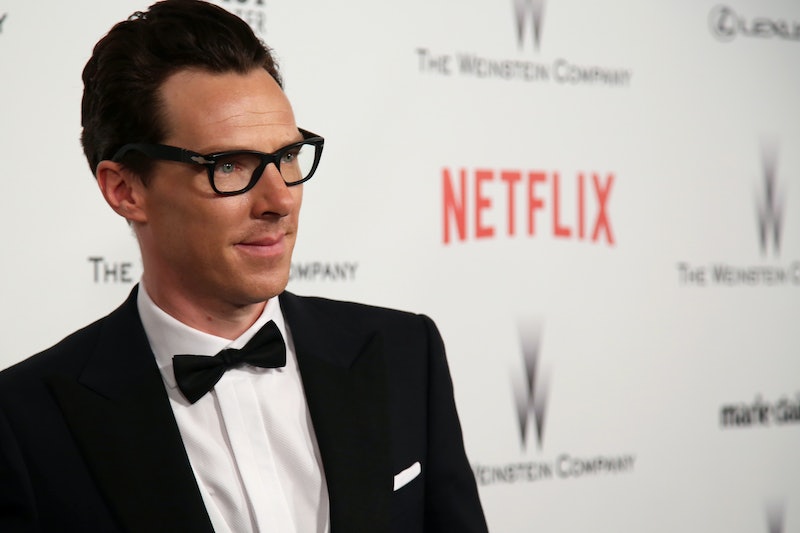 Just when you were wondering exactly why you were back at your desk after a holiday weekend, the Internet went and answered that question for you by releasing the first photo of Benedict Cumberbatch as Doctor Strange. The image, which appears on the Jan. 8-15 cover of Entertainment Weekly, shows a goateed Cumberbatch in costume as the title character in the Marvel superhero film Doctor Strange , which is currently scheduled to hit theaters on Nov. 4, 2016. He's wearing a blue tunic with the high-collared red Cloak of Levitation over it, belted at the waist and with a golden amulet hanging over it — the container for the Eye of Agomatto, which he's calmly pointing right at the viewer. He also has gray streaks in his hair and that scruffy little goatee I mentioned from before. Frankly, Cumberbatch looks to me like a pretty faithful representation of how Doctor Strange was drawn in the comics.

But if there's one thing I've learned from my time on the Internet, it's never to assume that anyone agrees with me, so I crept over to Twitter to see what the general consensus is about this first image. And, overall, it seems to be good! There was a lot of excitement in a lot of different languages, which was awesome to see, but there were also some very unique responses that I just had to point out directly, because they tickled me. So here they are — the 12 best responses to the first image of Benedict Cumberbatch as Doctor Strange.

7. The Bummed But Optimistic

And that about covers the entire possible human response to this photo. As far as I'm concerned, you can feel however you want about it, but, me personally, I'm somewhere between "edge of my seat excited" and "peeing my pants thrilled," so I have no idea how I'm supposed to handle a trailer.