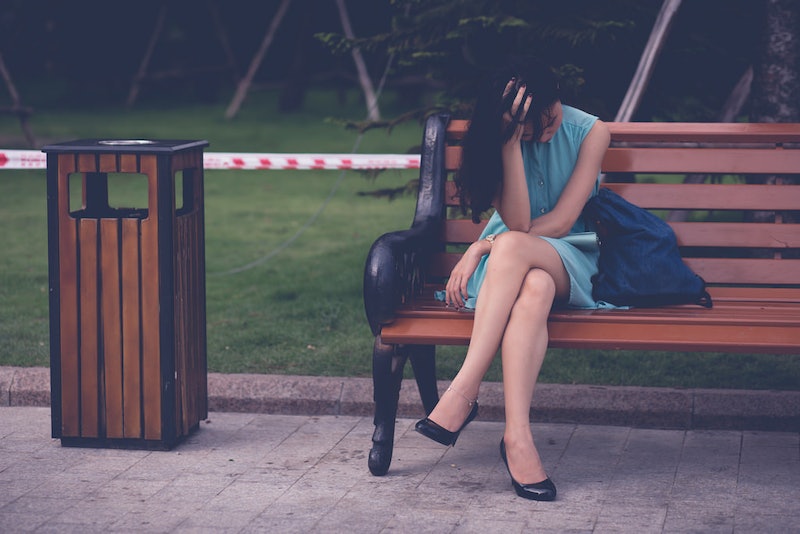 Though "mansplaining" may sound like just a silly term for a when a man explains something, it's a distinct phenomenon, as anyone who's been on the receiving end of it will tell you. There's a difference between mansplaining and explaining something as a man — a difference which becomes apparent when we examine the qualities inherent to mansplaining. The first, of course, is the topic being mansplained: Typically, it's one of many things men explain to women that don't actually need to be explained — and, in fact, would be better explained by the women themselves. This is the quality Rebecca Solnit, who popularized the term "mansplaining," elaborates on in the book Men Explain Things To Me. The kicker of the story? Solnit describes a man explaining a book that she wrote to her. Needless to say, this is not a thing she needed explained to her.

Secondly, mansplaining attempts to "explain" things to women as if they are misinformed — when really they have all the information necessary to form an opinion and have thought it through, but simply disagree. Solnit writes, "Some of the men out there respond on the grounds that my opinion is wrong, while theirs is right because they are convinced that their opinion is a fact, while mine is a delusion. Sometimes they also seem to think that they are in charge, of me as well as of facts."

Mansplaining is real: As BitchMedia points out, studies have shown that people listen to men more than women, interrupt women more, and even retweet men more. Men also tend to dominate work meetings and classroom conversations. But beyond the research, mansplaining shows up all the time in many women's everyday lives.

Here are a few things women wish men would stop explaining to them and wish they had more opportunities to explain themselves.

In a conversation about Sweden's parental leave policy, I mentioned I was glad that the government required fathers to take at least three of the 16 months required for each family. A man then told me I was "confusing personal decisions with government decisions." In other words, I had an opinion that diverged from his because I was confused. Well, if I'm confused, then the whole Swedish government is confused. It's perfectly reasonable to disagree with someone's political views, but assuming someone disagrees with you because they are ignorant and you need to correct them is a unique feature of mansplaining and a symptom of arrogance.

This happens even when a woman has knowledge of the field as well. A former male coworker once explained to me that our visual perception is influenced by not just the eyes but also the brain (which really seems like common sense, because nobody could see without a brain, but OK). After I told him I had a degree in neuroscience and named the brain regions he was referring to, he continued on with his speech anyway. Similarly, one woman writes in the Tumblr "Academic Men Explain Things To Me" that, while she was at a conference to talk about black holes, a man explained some very basic things about them to her, such as, “Did you know a black hole is really heavy?" These men wanted opportunities to sound really smart and felt that talking to women about topics they supposedly wouldn't know about would accomplish this. It didn't.

Whether or not a field is male-dominated, it's common for men to explain women's own areas of expertise to them. Solnit writes that men often explain literature to her from their perspective as if it is the universal perspective. She uses Lolita as an example: Since literary criticism is often dominated by white men, mainstream interpretations of the book don't usually identify with Lolita. When she interprets the book from Lolita's perspective, she is told her interpretation is off. This is another example of when women demonstrate their own knowledge on a topic, but men still feel their own knowledge deserves more attention.

A man once presented a rather bizarre theory to me. Women, he said, don't understand their sexuality as well as men do because "you don't pee with your clit" — as if there were no way to relate to my body other than doing what cis men do. And I'm not the only woman who has had vaginas mansplained to her, either. One woman writes in the Academic Men Explain Things To Me Tumblr that her ex boyfriend tried to put scented hand lotion on her vagina, reassuring her even when it hurt and ultimately gave her an infection that he knew it was OK because he'd "had way more contact with vaginas." "Apparently, living my entire life with my vagina makes me less of an expert on my own body than him," she observes. And apparently, living our whole lives doesn't even make us experts on ourselves.

While it is always heartening to see men involved in feminism and other social justice movements, it is disheartening to hear white men explain diversity to women of color, as Matt Damon did when he interrupted Effie Brown to talk about diversity in film. Men have even mansplained mansplaining. It is one thing to support a movement and try to educate people outside of it and another to try to educate the people most directly involved in and affected by an issue. When someone understands a problem through personal experience, others could actually learn quite a bit from resisting the urge to mansplain and listening instead.

More like this
At 14, Tatiana Maslany Was Obsessing Over Tamagotchis & The Spice Girls
By Gabrielle Bondi
Scotland's First Period Dignity Officer Has Sparked Backlash
By Darshita Goyal
Beyoncé & Madonna’s “Break My Soul” Remix Honors A Group Of Black Icons
By Stephanie Topacio Long
The Best Time To Date After A Breakup, According To Experts
By Bustle Editors
Get Even More From Bustle — Sign Up For The Newsletter