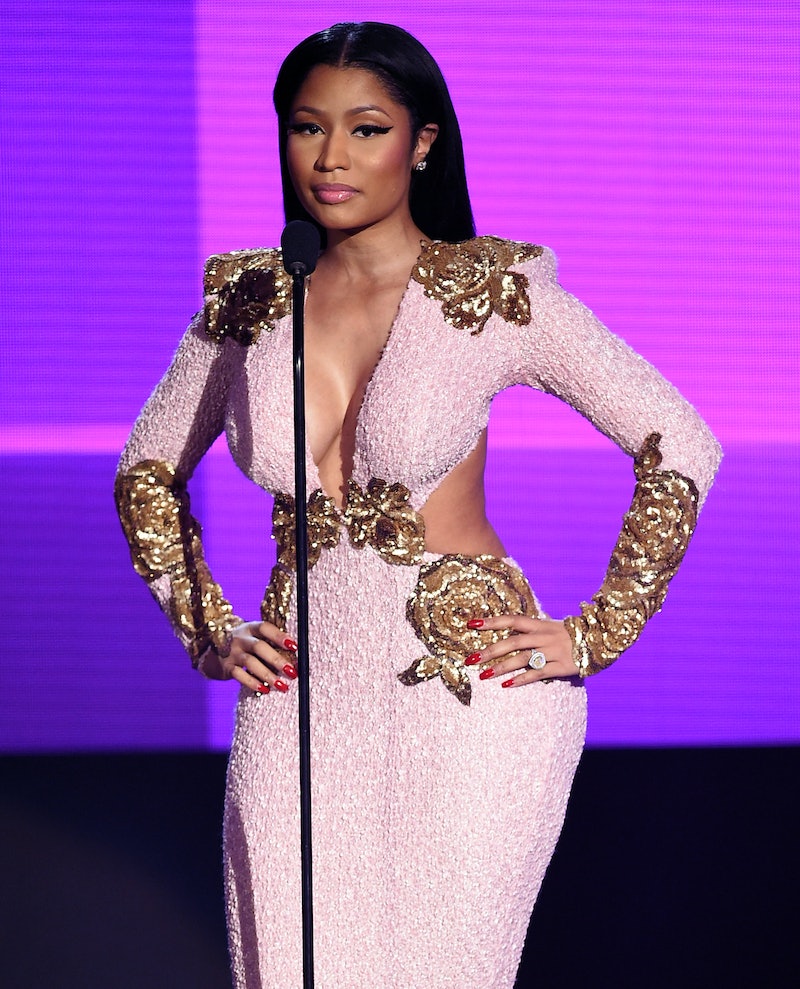 You know how Nicki Minaj has two (TWO) diamond rings from Meek Mill but she's not actually engaged yet? Though the rapper revealed the surefire way we will all know she's engaged (Meek Mill wants to gift her with THREE RINGS before he actually proposes) it seems like the two are getting one step closer to walking down the aisle. Why? Because Nicki Minaj is literally crowdsourcing ideas for her wedding on Twitter.

To be fair, I can't say for sure that it's actually her wedding that she's talking about here, but that's a pretty educated guess, what with all of the Nicki Minaj/Meek Mill engagement rumors and wedding talk as of late. And, like everything else in 2015, the best way to get public opinion is by encouraging Twitter users to fave or retweet the option that they like the most. So of course Nicki Minaj is utilizing this strategy to help plan her upcoming wedding (it would seem).

"RT for beach wedding. Fave for church wedding," Minaj tweeted on Dec. 27. I mean, sure, maybe she just wants fans' opinions about which type of wedding they prefer in general, but that seems a little unlikely — and way too much of a coincidence. (FYI, beach wedding is winning).

Besides the fact that fans obviously interpreted this as a hint-ity hint hint about Minaj's own nuptials (the flurry of reaction GIFs and shocked responses certainly speak for themselves), the tweet really does seem like one step closer to a genuine engagement/wedding.

The rapper herself has been quiet about any possible wedding plans, but she did gush about her relationship with the rapper to Billboard. "I don’t know what’s going to happen with he and I. I just know right now we are really, really enjoying each other’s company," she recently told the magazine. "So, shout out to everybody in the world that’s just trying to find love or be happy. Everybody should have someone to hold at night. It really, really changes your energy. I find that my energy is very different afterward — if I’m in the bed with him, just hugging him all day. It’s just, like, something about love. You transfer it. It’s infectious."

Also infectious: those diamond rings, which just keep multiplying by the day. As Minaj told Billboard, Mill "said he would like to give me three rings before we get married." They're already at two and coupled with Minaj's not-so-subtle crowdsourcing tweet, it's not hard to see that a wedding is probably on the horizon some time soon.