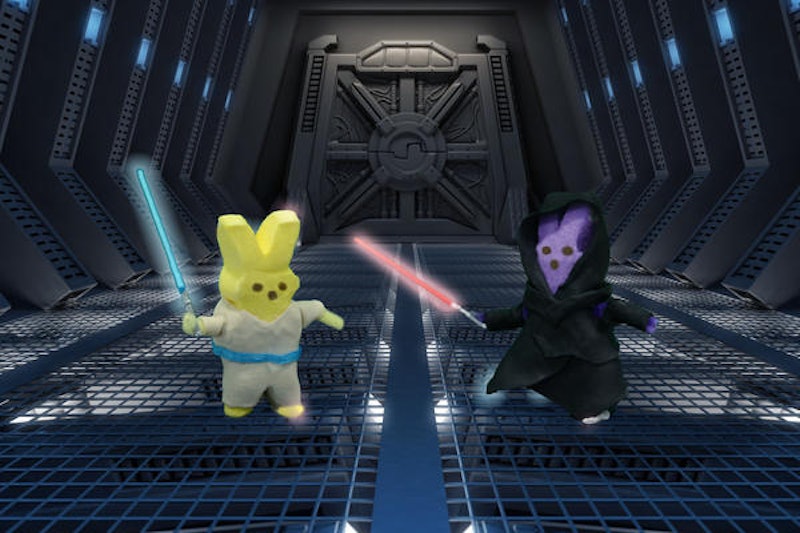 As 2015 slides into home plate, we've reached the time of year when we look back and revisit the events and pop culture phenomena that shaped our last 360-some days. It was a year filled with firsts — gay marriage was made legal in all 50 states, a new captain took the helm at The Daily Show, and Oxford English Dictionary's word of the year was actually an emoji (the crying laughing face). But that's not all. We've got even more top moments of 2015, reenacted by Peeps — because nothing illustrates triumph quite like a colorful army of marshmallow bunnies.

Before we move forward to the late-mid-twenty-teens and fixing all of the world's problems that remain on our horizons (a great New Year's resolution, right?!), we should celebrate the victories that humanity and its Peeps have achieved this year. In addition to acting as emotional fuel for a healthier and happier 2016, these dioramas are also super cute, proving that Peeps can be festive any time of year, not just when the Easter Bunny leaves them in a basket with chocolate eggs.

So grab some Peeps, chill the champagne, and turn on "Auld Lang Syne," because we're about to get all nostalgic over the year in the rearview mirror.

1. A Princess Was Born

The Duke and Duchess of Cambridge — or Will and Kate, as we know and love them, celebrated the birth of their second child Charlotte this spring. Little Charlotte is the first princess to be born into the royal family in over six decades, and she's already making up for lost time with her super-cuteness.

The U.S. women's soccer team took the crown of world champions with a 5-2 victory over Japan the day after the Fourth of July, inspiring a new generation of girls to go for gold. The last time the United States won a Women's World Cup was 1999, with Brandi Chastain and Mia Hamm leading the charge.

Even with a misspelled name, the three year old thoroughbred was able to sweep the Kentucky Derby, Preakness, and Belmont Stakes to become the 12th ever Triple Crown victor and first horse to complete the Grand Slam, which means winning the Triple Crown plus the Breeder's Cup Classic. American Pharoah is now retired and living in Versailles, Kentucky where he will begin making little baby Pharoahs this coming spring.

4. The Pope Brings His Message To The USA

Pope Francis made a huge splash when he visited the USA last fall, and his messages of tolerance and forgiveness struck a chord with many Catholics and non-Catholics alike. Francis has stated that the Church should be more accepting of atheists and gay people, and that the church shouldn't focus so heavily on denying women reproductive rights. Because of this shift in the voice of the Catholic Church, Francis was given the rockstar treatment in the USA.

No spoilers, but Star Wars: The Force Awakens continues to be a force for selling movie tickets and a waterfall of merchandise (my boyfriend and I both received Star Wars-related gifts this Christmas). Even Hillary Clinton got in on the Jedi-madness as she signed off from the most recent Democratic debate with, "May the force be with you." If you haven't seen it, do it! Go! Why are you still sitting here?