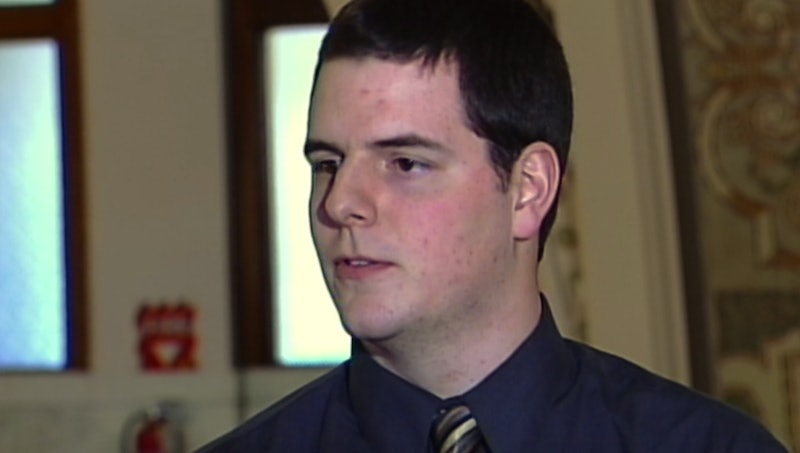 Some people just aren't themselves when there is a camera in front of them, and can appear uncomfortable or even a little strange. Case in point: Mike Halbach, brother of Making a Murderer victim Teresa Halbach. Many viewers have claimed that in the news footage collected in the Netflix docuseries, Mike comes across as "suspicious." His behavior lead many to post theories on Reddit and various websites such as MTV and Maxim which speculate that Mike could have been involved in Teresa's disappearance and murder in 2005. However, even Steven Avery doesn't seem to believe Mike could have been involved: In a 2009 court filing, Avery suggested that members of his own family could be responsible. In that filing, Mike's name never even came up.

Ultimately, Steven Avery and Brendan Dassey were the ones convicted of Teresa's murder, and Mike was never considered a suspect (he did not respond to Bustle's request for comment on the matter). Avery's lawyer Jerome Buting stated during the trial (as seen in the docuseries):

In most cases, the people who are close to a victim are the ones who are in fact the killers. And, in this case, in every single instance, all those people who are close to her, the police never investigated any of them. They never from the minute the case was reported considered — seriously considered — the possibility that Teresa Halbach was killed by somebody she knew.

There's of course no way to know for certain how much the police looked into Teresa's family and friends. Special Agent Fassbender claimed in the docuseries that Avery wasn't the only suspect investigated: "We go into an investigation and you're not gonna lock and load. You're gonna listen to all the intelligence and information being brought in, look at all the evidence. The object is to allow the evidence and the facts that are uncovered as you go along to lead you to the most logical suspect," he said. In this case, the most logical suspects to the prosecution were Avery and Dassey. It's highly unlikely Mike was involved in any wrongdoing.

However, as the Internet is focusing on — and picking apart — each piece of footage of Mike provided by the documentarians, people are starting to ask questions.

It's definitely worth noting that Mike only appears in the series during press conferences, and not in any one-on-one interviews with the filmmakers. Said filmmaker Laura Ricciardi in a December 2015 interview with Vulture:

We invited the Halbach family to participate in the film, and we had coffee with Mike Halbach, the official spokesperson for the family, to discuss the idea, but they decided not to participate. So, we filmed Mike at all the press conferences that he held, but that was the extent of our interaction with him.

So viewers aren't getting Mike's full side of the story, or a chance to see him in a role other than that of official Halbach family spokesperson. It's also worth considering that in 2005, he was a young man who had just lost his sister in a violent and horribly public way, and was thrust into a national spotlight. That situation could make anyone come across as uncomfortable on camera.

I'm not endorsing the accusations in these Reddit theories. I am simply reporting on them to acknowledge their existence as one facet of how viewers have reacted to Making a Murderer. I believe it's crucial to keep in mind that these are real people whose lives were affected by a tragic loss. The Internet would likely do well to remember that before leaping to conclusions with unsubstantiated allegations.

Theory #1: Mike Is Just As Innocent As The Rest Of The Victims

When his sister went missing in 2005, Mike was placed in one of the most difficult positions someone can find themselves in. Whenever he came onscreen, I couldn't help but think of Gone Girl — specifically, whenever the character Nick, whose wife goes missing, has to make appearances in front of the media. Nick had each of his mannerisms and accidental smiles analyzed, when he'd really [spoiler] done nothing wrong. Reddit user docuseriesfan also came to Mike's defense:

Being the family spokesman is a lot of pressure for a guy in his early 20s. He knows someone needs to be the voice for the family, but I can't imagine how hard that is when you are dealing with the stress/agony of your sister going missing and eventually being murdered, and having to speak in public at the same time. That would be incredibly stressful to say the least. You're probably not sleeping much, and spending hours around your family trying to comfort them as well as yourself. That's why I don't put much stock into any statements that seemed "off" to us in the context of this documentary ... To me, suspecting Mike Halbach of something is just as outrageous as all of the holes in the police investigation of [Avery] and [Dassey]. None of it makes sense, and I think it's quite unfair. Just to be clear: I understand why people speculate, I just don't think it's fair to accuse someone when there's no proof.

Viewers have noted odd behavior from Halbach’s camera-happy brother, including his body language when doing an interview alongside her ex-boyfriend as well as this excerpt from an interview he did with the documentarians one day after his sister had been reported missing.Interviewer: “How are you holding up?”Mike Halbach: “Um . . . I mean… the grieving process, you know, could last days, could last weeks, could last years. You know hopefully, we find answers as soon as possible so we can, you know, begin to . . . hopefully, you know, move on, hopefully with Teresa still in our life.”

As mentioned previously, like with Hillegas, Mike was never considered a suspect by the prosecution or the defense. In Avery's 2009 post-trial motion, he made no mention of Mike's name. It's also important to keep in mind that grief can take many forms, and it could be deemed insensitive to judge one person's expression of sadness.

In an article about the show, Gawker pointed to the existence of Reddit theories about Mike:

In terms of fostering compassion for the dead, Halbach family spokesperson Mike (Teresa’s brother) doesn’t help things at all by creepily grinning when discussing his sister’s murder trial, and by blindly investing faith in the police (“We love the police!” he gushes at one point). Did he need closure so much that he refused to see the defense’s reasonable suggestion that his sister’s actual murderer might still be somewhere on the loose or did he need to show solidarity with the police, for some other reason?

Whatever your feelings about Mike, it's important to remember that the docuseries covers an actual crime with an actual victim, and that real people's lives were forever altered by her murder — not just Avery and Dassey's lives, but the entirety of the Halbach family and their friends. Making a Murderer wouldn't be such compelling television if it wasn't so full of contradictions, drama, and chances to theorize about possible conclusions. But it's essential to also be aware of the root story before making what are as-of-now entirely unsubstantiated claims.

Editor's note: This article has been updated since its original version to include more information about the involvement of Mike Halbach in Steven Avery's trial.