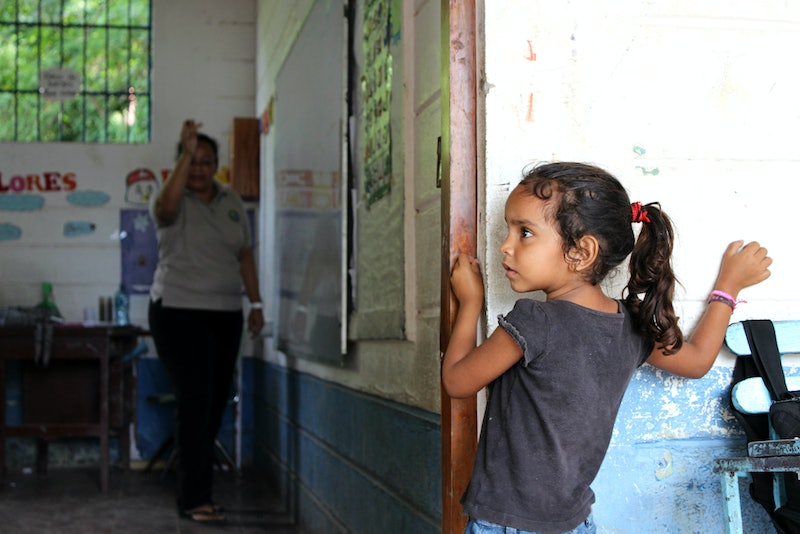 It’s November and muggy — the sort of day during which you expend so much energy trying to fan away the blanket of heat that you end up sweating even more. In the middle of a crumbling courtyard, a group of Nicaraguan students has gathered to play a frenzied game of “Never Have I Ever,” which has devolved into a simple English language lesson. Taking turns, each one is allowed to name something they like.

One of the students picks “Nicaragua.” A local woman standing nearby purses her lips disapprovingly, prompting her American companion to nudge her and joke, “You don’t like your own country?” There’s a brief moment of silence before the woman turns to reply. “No," she says sternly. "The United States was on the wrong side.”

Out of context, it seems like one of those passing comments that get hyperbolized in hokey docudramas or tossed around by graduate students hoping to impress their friends who have engineering degrees. But it's not totally untrue. Nicaragua isn't the country it should have been by now, and that's at least partially due to the American intervention of the Iran-Contra scandal in the 1980s. Now, there are some — mainly starry-eyed kids and a host of nonprofit groups — who are trying to fix whatever fragile relationship is left between the two nations through an assemblage of ambitious initiatives. At the heart of their toil is education.

Much of the Nicaraguan Civil War’s middle years were filled with smoking buildings, antitank weaponry, and broken concrete slabs covered in dust, blood, and crying children — something you’d likely see plastered up in a tragic National Geographic photo essay or displayed morbidly in an art gallery in SoHo.

In the United States, the Contra scandal, with its hours of Oliver North testimony, left the public hungry for more. In the words of columnist and former New York Times correspondent Stephen Kinzer, “It was a classic good-versus-evil war, [but] there was great debate … about which side was good and which evil.”

By the early ‘90s, however, American interest had faded significantly. There was the infamous CIA/Contra cocaine smuggling scandal in 1996, in which San Jose Mercury Times reporter Gary Webb accused the government of funding the Contra effort by trafficking crack cocaine from Nicaragua to the slums of America. But that story dissipated when then-President Bill Clinton admitted on live television that he’d had an affair with White House intern Monica Lewinsky. For all intents and purposes, the United States had forgotten the Nicaraguan people.

For the past few decades, perhaps in reparation for the sins of their fathers, a handful of nonprofit organizations have been helping Nicaragua’s recovery along by flooding the country with a wave of scholastic efforts meant to train the local population, and beefing up the tourism industry wherever sunny beaches and good surf abound. While things don’t always go as planned, the outlook is guardedly optimistic. Against all odds, the country is rebuilding.

Nicaragua is still the second-poorest country in Latin America, after Haiti. But in the past 25 years alone, the illiteracy rate has dropped from around 60 to 75 percent to just 12.5 percent, according to recent UNESCO estimates. (Some of that change can justifiably be attributed to FSLN's heavy education campaigning in the early '80s.) Nowhere is that progress more apparent than in the southern coastal city of San Juan del Sur. Change there is slow to come, but it’s on its way — ATMs, mobile phone shops, and law offices pepper the corners and side streets, and the one-time fishing village has all but become a mecca for surfers looking to vacation off the beaten path.

None of that came easy. In November, accompanying one of those ambitious nonprofits, I boarded a plane to meet the people of San Juan del Sur. I quickly discovered just how difficult the transition had been.

“Our initial efforts to reform healthcare and sanitation [following the civil war] were unsuccessful, because basic levels of understanding were so low,” Lena Ruiz tells me one afternoon. Ruiz is the executive director of Servicios Médicos Comunales, an organization which runs the local Free High School of San Juan del Sur, an educational initiative that gives teens and adults the opportunity to finish their schooling free of charge. “In the beginning," she says, "rural villages were given written instructions for medicines or [water filtration], but they couldn’t read them — we realized that we weren't going to be successful unless we addressed education first."

She breaks momentarily to readjust the sleeves of her dress. Ruiz wears her groomed appearance and pinned-back hair as a badge of honor. With everything she's achieved, she should.

Newcomers often find it difficult to comprehend just how deeply the city's problems are rooted. For years, in addition to a general lack of resources, rural communities in San Juan del Sur also lacked the ability to understand that everyday activities — drinking well water or cooking with a smoking oven — were killing them. Certainly, the civil war, with all its horrors, did nothing to help them progress vocationally.

Ruiz and the Free High School's renewed emphasis on education has helped. In certain areas, the opportunity to learn is just now becoming something of a commonality, but it's catching quickly. And although the elements sometimes combine to make school days near-impossible (torrential rains and muddy roads make routes all but impassable by foot), careful donations by nonprofits have helped to bridge the gap.

One of those initial donations, a yellow school bus requested by the Free High School to transport students to and from their Saturday classes, came from the international nonprofit Random Acts, a charity co-founded in 2010 by Supernatural actor Misha Collins and a group with whom I’ve been privileged to work for the past two years. The group’s manifesto, to “conquer the world, one random act of kindness at a time,” can sometimes make it difficult to categorize in traditional terms, but it also gives it an edge where other nonprofits might falter. There is no set precedent for what is or isn’t too much — no determined constant that might make it difficult to evolve or enact new global initiatives. In the charity world, Random Acts is unorthodox in the best way possible.

Collins himself is something of an enigma. Boisterous and dynamic, with a litany of riotous anecdotes, his stage demeanor falls away quickly as crowds dissipate, giving others a glimpse into something much softer — something empathetic to the plight of those to whom life hasn’t been so kind. A self-described introvert, he speaks intellectually and with a gentle fondness for kindness and complex humanitarian causes.

“Why Nicaragua?” I ask him one day, dissecting his decision to base the charity’s next big effort in San Juan del Sur.

“We’ve always felt that it was important not to be prescriptive from the outside,” he replies, choosing his words thoughtfully. “We don’t want to be a bunch of elitist foreigners who sweep into an impoverished community and say, ‘What you guys need is a clinic.’”

Collins’ father, Richard Krushnic, and his family have been volunteering, fundraising, and organizing to support the community of San Juan Del Sur for more than 15 years, so the decision to set up base there was easy. Their relationships with local academic figures, he explains, is a specific point of confidence.

“The only way to really help a community is to work closely with trustworthy leaders within that community and find out what is needed most — what would be most helpful,” he says diplomatically. “Nicaragua is the second-poorest country in the Americas. Are there communities that are poorer, or places where the suffering is greater than in San Juan del Sur? Of course. But we had all of the pieces in place in this particular community to be confident we could make a big impact — so we seized it.”

In doing so, Collins and the Random Acts team have seemingly filled their agendas with a list of projects meant to assist the community respectfully, building a new campus for the Free High School and sponsoring a local nonprofit’s mid-winter theater program. Of course, true to his word, nothing is done without first consulting local community leaders. This is their movement, after all.

On one particularly scorching afternoon, the Random Acts staff and its group of two-dozen volunteers hammer away at the beginnings of what will eventually become the new campus for the Free High School of San Juan del Sur.

Shoveling concrete and bending rebar, the group trades jokes in broken Spanish with the construction crew, which is vocally appreciative of the opportunity for work. No one seems to notice the heat. One day earlier, the volunteers — many of them idealistic college-aged women who dream of making a difference in the world — have found themselves entwined in a massive scavenger hunt with the children of the Barrio Planta Project, an education initiative created by American expat and Philadelphia native Dyani Makous to empower low-income children and adults through supplementary schooling, with an emphasis on English and the arts.

In 2008, after a travel-writing stint turned into a long-term residency, Makous began helping the one-time fishing community in whatever way she could, teaching language classes and coordinating with local teachers to find a permanent place for the students to attend their courses. “I wanted to give back,” she tells me that afternoon. “I got a glimpse of the American dream and I didn’t like it, so I stayed.”

As she speaks, her eyes flick back and forth across the courtyard of La Escuela Integral, a recreational house which once belonged to President Anastasio Somoza García’s wife, Salvadora, before the family’s dictatorship was overthrown by the Sandinistas in 1979. Where a large in-ground pool once resided, a few students now roll hula-hoops back and forth, painting faces and practicing their English. The crumbling brick and chipping paint that previously survived the atrocities of the Nicaraguan Civil War is no match for the screams of laughter echoing off the walls from the children whose generation might someday make it beautiful again.

About halfway through the week, the group is granted a brief pardon from its scheduled activities to relax by the pool, giving me a chance to sit down with Supernatural and 2012 actor Osric Chau, a longtime supporter of the charity who's come along on the trip as something of a special guest. Cheerful and talkative, he waves to volunteers as they pass by.

“When I was growing up, my parents put me into all these programs, and they always said, you know, ‘You might hate this. It doesn’t matter, we just want to keep as many doors open for you as possible,’” he says, smiling broadly. “Hopefully, that’s what the nonprofits are providing to the community here.”

A few days later, I reluctantly return home, rifling through my thoughts as the plane takes off from Managua's main airport.

Heading into town the next morning to put a dent in my holiday shopping, I instead end up wandering aimlessly for the whole of two hours. Something is off. It's as if I've crossed some invisible barrier and everything on this side of the wall is a caricature of reality. Purchasing nothing, I return home, close the door behind me, and let myself feel it. A part of me — the nagging part — wonders whether our efforts in Nicaragua are truly for the community’s benefit. Truthfully, if I have to put a finger on it, I'm the one who's come back reconstructed.

But maybe that's the point. While donations and fundraisers are all wonderful things, they aren’t the only tools needed to implement change. Perhaps just experiencing a sliver of what we’ve inflicted on the people of Nicaragua is enough to begin laying the foundation — both literal and metaphorical — for something real. If nothing else, it’s a start.