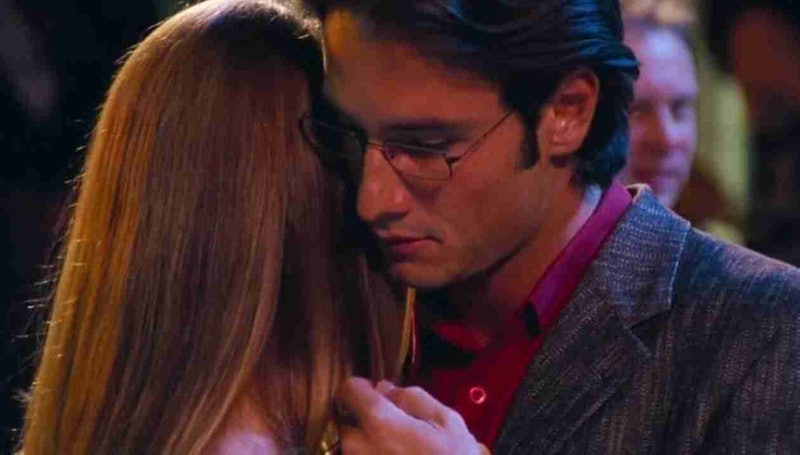 Ah, Love Actually. The 2003 film that continues to captivate the hearts and minds of millions around the world. The 2003 film that continues to leave the world with a lot of questions that were still unanswered once the screen faded into that affectionate airport scene and then the credits began to roll. One such question concerns the storyline that surrounded Sarah and Karl, two employees at Alan Rickman's company who were low-key crushing on each other. While I have a lot of questions about Harry's storyline, like why Karen (Emma Thompson) stayed with him after he cheated on her, I can't stop scratching my head every time I watch Laura Linney and Rodrigo Santoro awkwardly close in on each other. Because, um, why did Sarah leave Karl to see her brother again?

As a reminder for those who haven't seen the film in a while, Sarah (Laura Linney) has a crush on Karl (Rodrigo Santoro) that the entire office knows about. It's gotten so bad that even Harry (Alan Rickman) has to sit her down and beg her to do something about it, because it's distracting and annoying. She still can't work up the courage, however, until the office holiday party, at which point she and Karl go home together. After the most relatable moment in the world — in which Sarah does a secret victory dance and then rushes around to clean her room before they have sex in it — she receives two calls from her brother, Michael, who is residing in a mental care facility. After the second call, Sarah immediately leaves Karl to go and attend to her brother, and their evening is ruined. But, like... why?

I mean, I'm not asking why Sarah went to go see her brother. I'm not a heartless monster here. I'm just curious as to why she rushed to go and see her brother right that second. He was in the care of licensed professionals, who seemed to have things under control before she got there. Couldn't seeing her brother have waited the 20 minutes that it would have taken her and Karl to progress in their relationship? Of course, it's quite possible that it wasn't just that which led her to hurry to Michael's side. After the second phone call, the mood seemed to be completely and thoroughly broken, and, considering how much awkwardness and pining it had taken to get them that far, Sarah might have been fleeing an awkward situation just as much as she was hurrying to be with her brother. Plus, she would have had to kick him out eventually to leave. Best to do it while he still had (some of) his clothes on.

All I'm saying is that, considering how long Sarah waited for something to happen between herself and Karl, you'd think she would have given him just a little bit more of her time, even if she was ultimately going to have to leave before the cuddling started to see her brother. Then again, if Karl doesn't understand that Michael comes first in her life, then he was never the right guy for Sarah anyway. And, if she hadn't rushed out immediately, we never would have learned the ultimate lesson of her storyline. I guess.