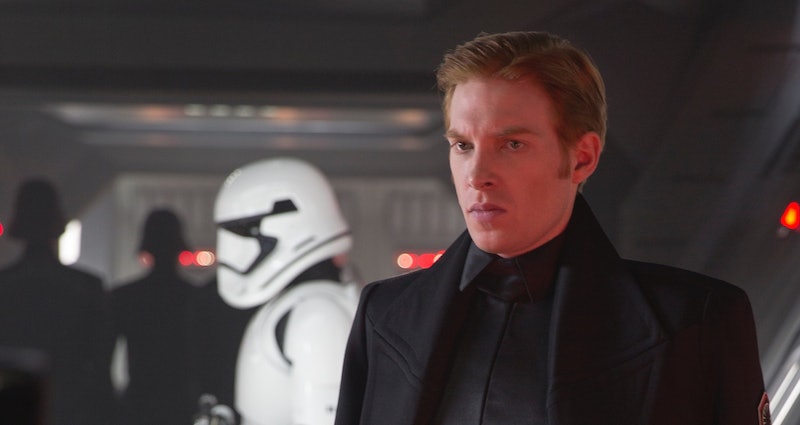 Praise be to Domhnall Gleeson, an actor who manages to remain distinctive and yet chameleon himself into roles so thoroughly that you'd rarely make the connection between two of his parts. Alas, that all came to pieces when he decided to reenter the nerdsphere by acting in another franchise, because it was impossible not to notice Bill Weasley playing General Hux in Star Wars . The instant I saw that flash of red hair on screen I was like, "OH HELL NO, WILLIAM ARTHUR WEASLEY," and by the time he was casually blowing up an entire planet system I was mentally digging Molly Weasley's grave. And judging by the reactions of all the other Potterheads who saw this movie, I was far from alone in my Weasley-shaming.

On the plus side, this is going to make Christmas dinner significantly less awkward for Percy, who may have been a git, but at the very least never joined the First Order. Or murdered millions of innocent people. Orrrrrr considered it his "destiny to rule the galaxy," as it so claims on the Star Wars Databank (aca-awkward, Kylo Ren). I imagine, though, that if Molly had the chance to knock some sense into the ginger hairs on his head, it would go down something like this:

In the fanfiction in my head (don't look at me), Bill Weasley was also cradle-snatched like we are all assuming Rey was — except across ~time and space~. In this alternate world, instead of being a Gringotts Curse Breaker and stud husband of Fleur Delacour, he just turned out to be a ruthless, power-hungry killing machine. Nature versus nurture, ya feel me? Hell, maybe all the people who are strong with the Force are basically the precursor to wizards and witches. Or maybe I just need to crawl back into my fandom trash hole and stop trying to justify why the coolest Weasley just became the most believably sinister villain of all time.

In the meantime, we can all mutually freak out on Twitter.

More like this
At 14, Jenny Han Wrote Rom-Coms About Her Friends & Fan Mail To Leo DiCaprio
By Alyssa Lapid
Everything To Know About Obi-Wan Kenobi Season 2
By Kadin Burnett
Who Is Liam Neeson's Character In The Obi-Wan Kenobi Finale?
By Kadin Burnett
Everything You Need To Know About The 'Knives Out' Sequel
By Grace Wehniainen
Get Even More From Bustle — Sign Up For The Newsletter