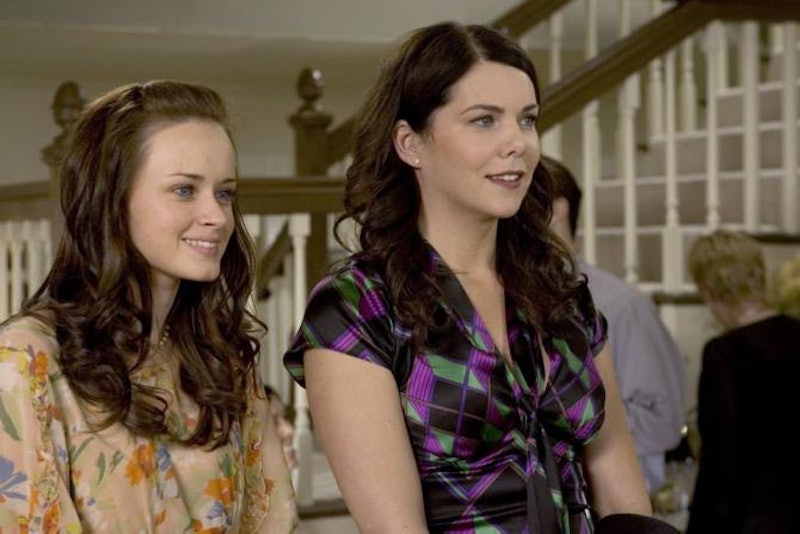 It’s almost like Gilmore Girls has never left, you know? The past year has been one big revival of the early-2000s show, starting with its tremendous debut on Netflix, and culminating with the announcement that it’ll return for a four episode limited Netflix series. It’s amazing that the show has just stayed fresh this long, except wait. Gilmore Girls aired in the early 2000s, which means that, when you watch it now in 2015, you're quick to notice that there are a lot of Gilmore Girls quotes that are outdated, if only because we have, like, cell phones and stuff now.

Of course, there's a good chance that you might not have noticed. I mean, just like you, I myself hold the show in such high reverence that sometimes I look past all the skinny scarves and dated pop culture references. Such is life: of-the-moment jokes are the first thing to be lost to next generation Gilmore Girl fans. And, though I don’t mean to burst your bubble (you know, the one that views GG as a perfect show even as you slowly forget what they're referencing or talking about), it’s about time we revisit some of those lines.

There’s no doubt that the show will come back swinging strong (I’m sure Lorelai has some zingers about Kimye), ‘Till then, here are some amusingly dated lines from GG episodes past.

1. "We Like Our Internet Slow, OK? We Can Turn It On, Walk Around, Do A Little Dance, Make A Sandwich. With DSL, There’s No Dancing, No Walking, And We’d Starve."

Oh, this classic line. Of course, we can chock up Lorelai's resistance to DSL to her resistance against her mother, because even in 2000-whatever you didn't want dial-up. Like, the second you could get rid of the buffering noises that came with starting up AOL, the better.

2. "Every Kid In That Brochure Was Awkward And Panicked. It Looked Like The Academy Award Audience During Michael Moore's Speech."

You can definitely Google that moment of tenseness if need be, but what was probably a timely reference in 2003 doesn't age too well today.

And if I wanted to talk to my VCR, I'd have to find where I threw it out 16 years ago.

This is decidedly not the world we're living in now.

Can you imagine that there were jokes made about the fragility of their relationship when it's still hard to remember a pre-Brangelina world? Jennifer and Justin Theroux for life, you guys.

Let's take a minute to acknowledge we have, as a nation, endured two Bennifer break-ups.

7. "Maybe This Is A Cheesy Perspective To Offer You, But Gwen Stefani And Gavin Rossdale Went Through The Same Sort Of Situation. He Found Out He Had A Kid That He Didn't Know About, But They Made It Work. As Far As I Know."

Key phrase here being "as far as I know," because Gwen Stefani is probably being cute with Blake Shelton as I type this.

Only '90s kids will get the reference. Or maybe not, but One Direction might be a bit more up-to-date.

9. "Yes, I Just Want To Apologize For My Sidekick Stalking."

Never forget that Christopher got Rory a Sidekick so he could keep tabs on her. If you totally forgot what a Sidekick was in the catalogs of cell phone history, you're not alone.

10. "I Don't Have Any Missed Calls. Oh, Wait, There's A Little Envelope Thingy In The Bottom Corner."

It was the innocent time for sexting.

Incidentally, I'm pretty sure my parents still think I work in "the blogosphere."

If you found yourself scratching your head and trying to remember what on earth your favorite Stars Hollow residents were talking about in these quotes, I don't blame you. If you weren't scratching your head, give it time. The world is changing faster that Lorelai and Rory's fast-paced pop culture references can possibly keep up with... at least until the revival.