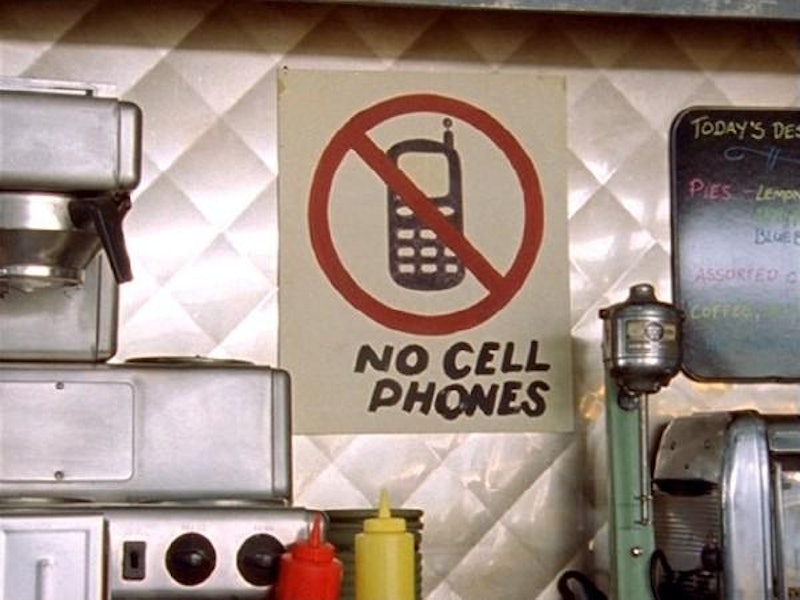 Now that Netflix has added Gilmore Girls, I have been binge watching it like crazy. I try to watch the series every few years because it's always awesome, but I always forget just how outdated some parts of Gilmore Girls are. I mean, the show aired from 2000-2007; it's not even a '90s show technically. But some of the technology and references make it seem so old.

None of that diminishes the story lines because they'll be relevant forever. But it is funny to see Rory and Lorelai walk around with pagers, check answering machines, and discuss their fear of fast Internet. (You'd think a couple of girls who talk as fast as they do would want their Internet to be equally speedy.) To the Gilmore girls though, fast Internet is equatable to The Shining with Lorelai famously ranting to her mother about how she doesn't want a DSL.

We like our Internet slow, okay? We can turn it on, walk around, do a little dance, make a sandwich. With DSL, there’s no dancing, no walking, and we’d starve. It’d be all work and no play. Have you not seen The Shining, Mom?

Now I'm on the fourth season of the show, and things are catching up a bit. Richard and Emily get Wi-Fi, Rory uses the Internet to do research, and some people have cell phones. (Those Nokia ones with the giant antenna, but still.) But those first few seasons were laden with references and objects that you kind of forgot existed just a little over a decade ago. Here are the 10 most outdated things from Gilmore Girls.

Home phones that are plugged into a wall! Do people still buy those? Luke's Diner has a phone...with a cord. Insane.

I never had a pager, but I'm told they were once used for more than just hospital communication. (Yes, doctors still use pagers.) Basically it was texting before phones had the ability. Lane, Rory, and Lorelai were frequent users of the device to send various messages back and forth before any of them got cell phones or Sidekicks. (Yep, Rory had one of those at one point too. Ah the early 2000s.)

FEAR OF COMPUTERS AND/OR THE INTERNET

Not only does the Gilmore house prefer slow Internet, but Lorelai has a fear of computers too. During the episode where she has to find a loan to fix a termite problem she used one only as a last resort. "I am thinking and worrying and using the computer and I hate using the computer!" she shouts at Rory. Not using a computer unless you have to is pretty unthinkable these days, especially for someone as hip as Lorelai.

BEING EXCITED ABOUT WI-FI

When Richard sets up his Wi-Fi he's so delighted that it works throughout the house. I remember that feeling myself back in like 2003. Now I'm outraged when a business doesn't have Wi-Fi available.

THE REFERENCE TO BRAD AND JENNIFER'S RELATIONSHIP

In Season 2, which aired in 2001-2002, Lorelai makes a reference to the seeming eternal bond Brad Pitt and Jennifer Aniston would have. "So, guess who’s in the process of breaking up?" she asks, to which Rory quips, "Brad and Jen?" Lorelai then scolds her daughter saying, "Bite your tongue!" Ah to be naive about Bennifer's 2005 breakup.

In one episode, Lane tells a boy she likes to look her up in the phone book. “Last name is Kim, we’re the only ones in Stars Hollow!" Remember phone books? Stalking was so much easier back then.

And picking up the phone without knowing who is on the other end! It's a good thing the Gilmores didn't have caller ID because Lorelai would have never answered when her mom was calling and we wouldn't have had half the funny exchanges we do get.

I remember *69. It was the small risk you took when you wanted to call your crush 17 times and hang up in case anyone ever answered. Caller ID ruined everything.

Lane could have hid her music collection so much better in 2014. Instead of multiple floorboards with stacks of discs below, she could have just stashed a single iPod. Kids these days have it so easy.