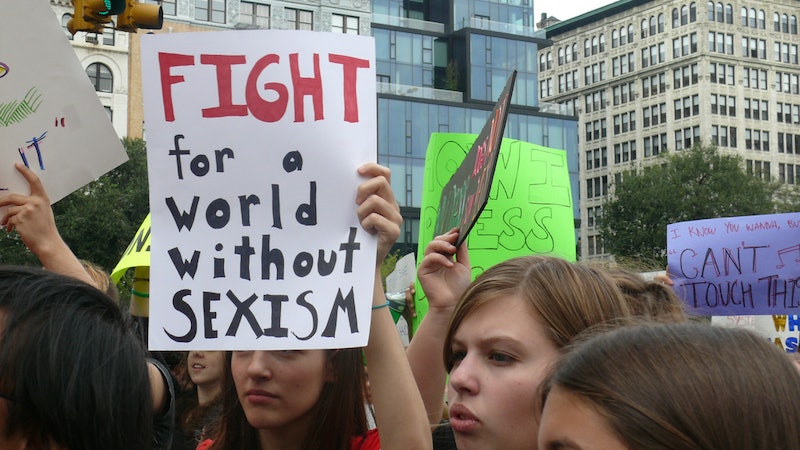 Because women are (slowly) making progress toward equality in the United States, I sometimes erroneously assume that problems of sexism and inequality are clearing up everywhere else, too. Well, I officially put the "ass" in "assume," because sexist laws around the world persist in dictating what women can and cannot do — and you wouldn't believe the extreme lengths some to which many of these laws go. Some govern women's wardrobes; others leave them legitimately exposed, vulnerable, and abused. Sexist laws have certainly changed for the better over the years, but we still have a long way to go.

America certainly has its own horrendous flaws when it comes to women's rights, and other countries are fighting similar battles; but in many cases, it's far more extreme. Women in some countries are denied of rights that we wouldn't even think twice about — like the right to drive a car. Wear a pair of pants. Marry who we want. Choose the job we go to every day. Not all women get these things; in fact, some get a mere fraction of the rights we have.

Here are some of the most insanely sexist laws around the world.

I'm confused. What year is it?! Saudi Arabia got a few brownie points this year after finally allowing women to vote; now, though, I'm wondering how many women are going to show up if they're not allowed to have a driver's license.

In this country, it's acceptable for men to beat their wives if they're doing it to correct the wife's behavior.

4. Divorce In Israel May Only Be Granted By The Husband's Permission

There's no shame in divorce. Sometimes, people change and can't get along anymore. Sadly, women in Israel are screwed, because only the husband can approve of a divorce.

5. Women Can't Live Apart From Their Husbands In the Democratic Republic of Congo

In the Congo, a woman is required by law to live with her husband and follow him if he moves — even if there's a history of abuse in the relationship. And spousal sexual abuse is quite common in the DRC: The number of women who reported experiencing intimate partner sexual violence in the 2007 DRC Demographic and Health Survey was over three million.

6. Yemeni Law States a Woman's Worth Is Half a Man's

Quite literally. The country's policy on legal testimony states that in front of the court, a woman is not recognized as a full person. A man must back her testimony for it to be considered, and women cannot testify at all in cases of sodomy, theft, libel, or adultery.

If a woman is raped and ends up pregnant in Ecuador, she can have an abortion only if she is mentally disabled.

8. Statutory Rape Gets Cancelled Out By Marriage in Morocco

That's right. In Saudi Arabia, Statutory rape doesn't exist if the two parties get married — and the law can force women into a marriage, too.

Women here can't wear pants. Or if they do, they have to wear a long skirt over them.

And the permission comes from — you guessed it — the husband.