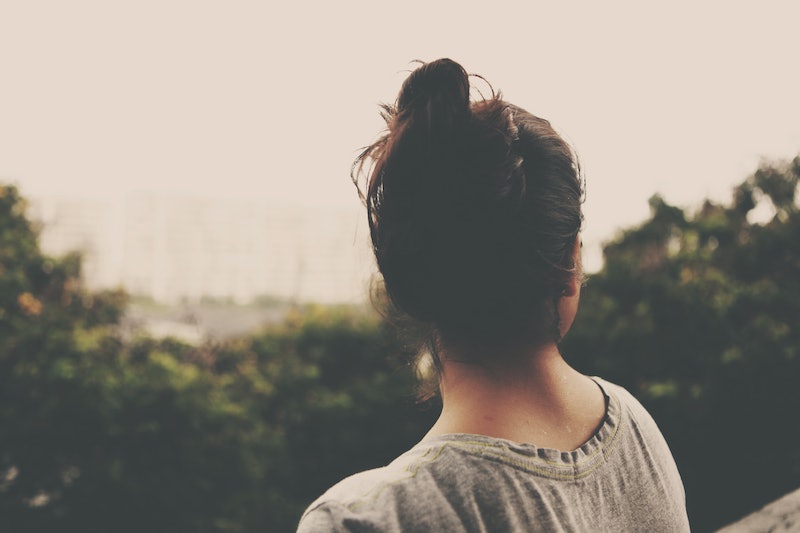 There are plenty of times we might be consciously lacking a sense of confidence, but there are also some weird signs of low self-esteem that you may have never considered. Growing up I always thought of myself as a confident person. I knew I wasn’t the supermodel of my high school, but I was more than fine with it. In my early 20s I still considered myself confident — but I wasn’t, really. By that time, there were subtle signs I was lacking self-esteem, but I didn’t realize it until I was really deep down that broken road.

Lucky, having low self-esteem doesn't have to be a permanent state. Personally, it took me realizing the signs my self-esteem had plummeted, and then starting to make moves right away to change it. A lot of times, the little ways we act in relationships and towards ourselves are very telling of our self-esteem. For instance, if we’re in constant need for approval from other people, it could be a sign that the approval we receive internally simply isn’t enough. Also, if we’re constantly at the center of explosive relationships, it might just be that we’re the ones igniting the flames because we’re not sure we’re worthy of love. No matter what’s at the bottom of it, if the signs are there, it’s not too late to change things around for the better.

Here are eight weird signs of low self-esteem and some tips on how to change it.

1. You Seem To Sabotage Every Relationship

There was a short time several years ago when my self-esteem was virtually non-existent. During that time I managed to not only mess up things up with every man I tried to date — I’d legitimately destroy relationships. I’d ultimately be left saying the cliché words, “It’s not you, it’s me,” and it was true. The major problem at the time was that I couldn’t wrap my head around why any guy would ever like me, let alone love me.

According to Psychology Today, when people suffer from a lack of self-esteem, they’ll test their significant other in order to reaffirm their own value. Those with low self-esteem will be OK with sabotaging relationships, because they’ve assumed their partner would leave them anyway. They aren’t sure if they’re capable of love, and end up ruining it.

2. You Find It Nearly Impossible To Make Decisions

People who have low self-esteem have trouble making even the smallest decisions. This could include something as meaningless as what meal to eat at a restaurant, or something big, like which college to attend. According to psychotherapist and psychological consultant, Emily Roberts, MA, LPC, this difficulty in making decision could be due to anxiety over making the wrong choice, even when there really isn’t a wrong choice. This could be because you’re scared of what other people will think of you and/or your decision and its outcome (we’ll get to more on worrying about what others think shortly).

3. You Attribute All Of Your Successes To Luck

Low self-esteem can often be detected by seeing how a person reacts to achieving certain things. According to LIVESTRONG, if you always assume you’ve achieved something because of luck, rather than because of your hard word, qualifications, or competencies, this is a red flag. Those with low self-esteem may lack the confidence to realize that they’ve achieved something on their own, and feel something else must have come into play to get them to success.

4. Social Media Notifications Can Make Or Break Your Day

Most simply put, the notifications we receive on social media sites like Facebook, Instagram, and Twitter are ways to validate the thoughts, opinions, and photos we share. If no one likes your latest selfie, it can hurt, sure. However, if you have a good sense of confidence, it’s not going to absolutely ruin your day. For someone who has low self-esteem, it might not only ruin their day, it could possibly ruin their whole week. Research has found over and over that there is a direct connection between social media usage and self-esteem. However, if you’re taking it to the extreme and noticing your day can be made far better or far worse dependent on the number of notifications you receive, your self-esteem might be too connected to social media. You’re overly concerned with what other people think, which brings us to our next point.

5. You Care A Lot About What Others Think

According to professional life coach, Fay Agathangelou, if you have low self-esteem, you are likely to worry too much about what other people think. Sometimes as a means of boosting one’s ego, you may become reliant on what others think about you, your actions, and your decisions. A friend's opinion can certainly be helpful from time to time, but if you feel your worth depends solely on others’ approval, it could be a sign of low self-esteem. You might get an immediate boost from someone who is one board with you, and oppositely can feel really terribly if someone doesn’t like you or what you stand for.

6. You’re Tend To Get Extremely Defensive

For starters, according to Dr. Marilyn J. Sorensen, PhD, those with low self-esteem don’t like to put themselves in situations that might result in disapproval or criticism. However, when they have to put themselves out there, they’re very quick to get defensive if others don’t align exactly with their thinking. If you find that you’re quick to defend yourself in this way, and even end up denying obvious things — like simple mistakes — this could be a sign you’re self-esteem is hurting.

8. You Have A Serious Fear Of Change

During my days of low confidence, I even hated when the seasons would change! It was that bad. According to LIVESTRONG, those who are lacking in self-esteem are fearful of change, and might even hesitate to remove themselves from bad situations as they don’t trust themselves to make good decisions and move forward. That said, they might end up staying in bad relationships, unhappy jobs, and/or unhealthy friendships simply because they don’t believe they’re capable of making things better.

As I’ve mentioned, throughout my young adulthood I’ve resonated at different times with nearly all of the signs discussed here — and I can assure you that things can definitely change for the better. If you’re associating with some of the points here, it’s time to make some changes to boost that sense of self-worth.

Start by reaffirming your self-worth with a trick I practice — write down one amazing thing about yourself every morning when you wake up, and then read the full list at the end of each week, each month, and each year. It’s fun, simple, and ego boosting! Next, amp up your decision-making skills by pushing yourself to make one quick decision on your own every day without seeking advice from others. Also, try to remind yourself regularly that you simply can’t please everyone, and that it’s impossible to control what other people think of you. Finally, come to terms with the fact that change can be a good thing, and they often changing something bad in your life will make way for something good (and totally not scary!).

By making some of these small changes you might find your confidence improves drastically, and that you worry far less about pleasing everyone and start to make yourself truly happy instead.