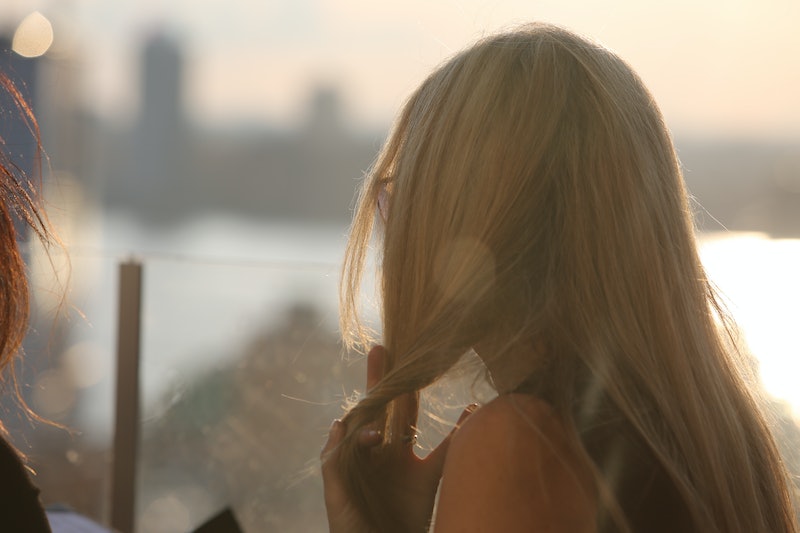 You may think you're a ninja when it comes to hiding your insecurities, but weird signs of low self-esteem are sometimes so sneaky that you may not even realize what you're doing. Everything from your body language to the way you act after sex gives others clues about your sense of self worth. Even when you text and who you invite to parties speaks volumes.

If you take a hard look at your life and your habits, you may discover that the way you live your life screams "I have low self-esteem." But knowing is the first step to improving your self-esteem and finding the inner strength to live a life that makes you genuinely happy.

1. You Apologize For Living

If someone bumps into you on the street, do you apologize? People with low self-esteem often suffer from a faulty self-image, or an inaccurate view of their worth. According to the Self-Esteem Institute, and may genuinely feel like everything that goes wrong is somehow their fault.

What to do instead: When you hear yourself apologizing, acknowledge that the apology is inappropriate and remind yourself that you did not do anything wrong.

2. You Claim Everything Is Luck

When something great happens to you, do you say you were just lucky or blessed or in the right place at the right time? Do you take things one step further and even say you don't know why they happened because you're not worthy? The truth is, you probably worked your ass off to get where you are. Your talents, intelligence, and personality also played a role in your success. According to the Self-Esteem Institute, these are is called irrational or dishonest self-statements. Other types include not accepting compliments, deflecting praise, and criticizing others who are in the same boat.

What do do instead: When someone gives you a compliment, practice simply saying "thank you." Also, why not own that you are awesome and you got that promotion because you are really good at what you do?

When you shop for clothes or decorate your apartment, do you do so with the opinions of others in mind? On a bigger scale, did you pick a major that you thought would impress your parents instead of one that would advance your dreams? Comparing yourself to others and living for approval are killers of both joy and self-esteem.

4. You Hide In Your Room

Would you rather die than be in the same apartment as a roommate who is mad at you? Are you constantly worried about others being mad at you while ignoring that you have feelings about the situation as well? Avoiding conflict or saying things to appease others is a sign of low self-esteem, according to Life Hack.

What to do instead: Life Hack recommended using, "an affirmation such as 'my opinion matters' or “I live authentically.'"

5. You Have That One Weird Habit

Maybe you pick at scabs or bite the skin around your nails or constantly police your body for hairs that you can pluck. According to Elements Behavioral Health, this is called compulsive self-mutilation and it's a common habit of people with anxiety or low self-esteem. It's often a coping mechanism for uncomfortable feelings.

What do do instead: Try writing your feelings down in a journal to give yourself another outlet. You may need help from a therapist to stop, according to Elements.

6. You Invite That Girl You Hate To All Your Parties

People with low self-esteem are often very concerned about the opinions of others, according to the University of New Hampshire Health Services. They're also very concerned with keeping the peace. It may be easier to invite your nemesis and let her treat you like crap than to confront her about the behaviors you don't like or remove her from your life.

What do do instead: It's important to avoid exaggerating or catastrophizing events in your life, according The University of Texas Mental Health and Counseling Center. This means you don't need to assume that everyone will hate you forever and you'll have no friends and it will be a big mess if you don't invite that person you don't like. Just don't invite her.

7. You Take More Naps Now Than You Did In Preschool

According to Margarita Tartakovsky, M.S. of PsyhCentral, low self-esteem has a lot of physical side effects, such as fatigue. Naps could also be an avoidance tactic when you have a lot on your plate, or a sign of depression.

What do do instead: Try talking with a therapist to help improve the impact of low self-esteem on your life. You can also try practical tips, such as eating better, getting enough sleep at night, and exercising, to improve your energy.

8. You Sneak Out After Sex

Sneaking out after sex can mean that you got what you wanted and now you want to go home. Or it can mean you aren't confident enough to think your hook-up will still want to spend time with you once he or she has gotten to home base. People with low self-esteem often have chaotic relationships that suffer due to constant feelings of unworthiness, points out the Self-Esteem Institute.

What do do instead: Before you get to the naked part of the evening, talk about expectations. Be blunt and ask if your date is the type of person who likes overnight guests.

9. You Check Your Phone For Non-Existent Messages

When there's a lull in the conversation or when you're left alone for a minute at a party, do you jump right to your phone instead of chatting or mingling? Maybe you're bored. Or maybe you're not confident enough to think that other people want to talk to you or care about what you have to say. Poor social skills can be a tell-tale sign of low self-esteem, according to The Self Esteem Institute.

What to do instead: Scan the party for acquaintances and see if there's someone you're comfortable talking to. If not, check the room for other loners and say hey or introduce yourself. You might also look for party games you can join in on. The group setting of the games might make you feel a little less on-the-spot as one-on-one conversations sometimes can.

Maybe you're trying to keep the peace or maybe you don't think the truth is interesting enough but you tell little white lies all the time. Later you're like "OMG why did I say that?" This is common behavior, according to The Self Esteem Institute, which points out that people with low self-esteem often wear masks or pretend to be something they're not to gain approval.

What do do instead: Let yourself be vulnerable and explore the idea that people will still like you as you reveal your truths.

11. You Can Never Pick A Place To Eat

What to do instead: Tell yourself "seriously, though, the world isn't going to end if my partner says, 'No, I don't want Taco Bell.'"

If you find yourself doing a lot of these things, it may be time to take a good, hard look at your self-esteem. You might find that life is a lot easier (and more fun) when you're more self-assured.