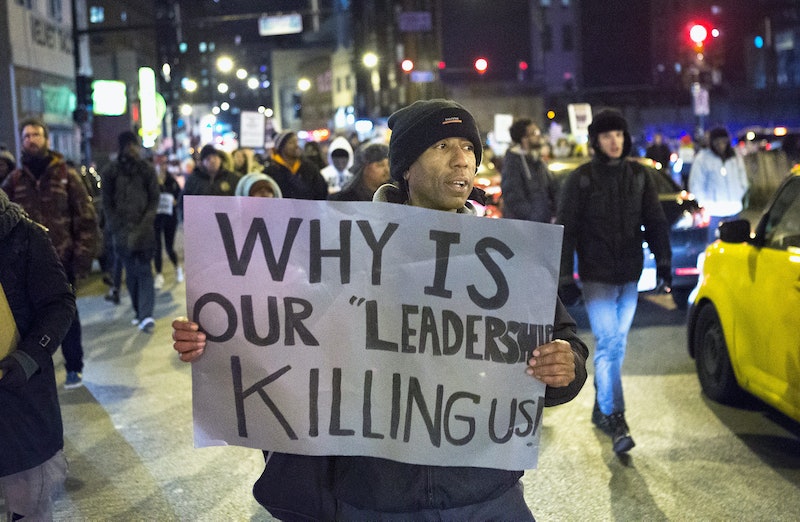 "Riots are the language of the unheard,” said Martin Luther King, Jr. So when Cuyahoga County Executive Armond Budish invoked MLK when he called for people to resist rioting in response to the grand jury decision over the Tamir Rice killing, and Governor John Kasich warned against acting in anger and frustration, they were not acting in line with MLK's teachings. They were overlooking a good portion of his philosophy for change.

MLK did not advocate for peaceful protest. He used peaceful protest as a tactic against violence toward black people and for equal representation in law and politics, so that we would be able to convict our killers. King advocated for voting rights, because when one isn’t registered to vote, they cannot sit on juries, like the Cuyahoga County grand jury which decided not to indict the cop who killed Rice. While the racial makeup of this grand jury has not yet been released, juries across the US are overwhelmingly white because blacks are systematically excluded. Authorities have used poll taxes, logically impossible literacy tests, violence, and intimidation to prevent blacks from even registering to vote.

Over and over, predominantly white juries have refused to indict the killers of black people. Racial bias is clear in the case of Tamir Rice. The officer who killed him thought he was 18 years old. Studies have shown that white cops perceive black children as older, stronger, and more violent than white children. A grand jury with greater representation may not have considered Rice’s death justified. They might have seen him as an innocent child who was playing the day he was killed.

When the grand jury decided not to indict, they said loud and clear that they thought the officer had probable cause to kill a 12-year-old. After watching the non-indictment of Michael Brown's killer, Trayvon Martin’s killer walking free, getting no accountability for the death of Sandra Bland, and seeing one of Freddie Gray’s killers get no conviction, Governor Kasich cannot expect people to “peacefully demonstrate.” We are not seeing the “path to positive change so everyone shares in the safety and success they deserve,” that he suggests, because Tamir Rice deserved so much more. He deserved to walk back home after a day of playing outside.

Furthermore, we know that riots succeed in bringing much-needed attention to these issues. After Michael Brown’s death, the world watched the anger bubble up in Ferguson. Young people filled the streets shouting and crying. They brought the phrase "Black Lives Matter" to America’s public consciousness. It's a major conversation in the 2016 election, and presidential candidates have proposed solutions for racial injustice. Until this violence is mitigated, we will continue taking action until we know our communities are safe.

It’s ironic that Budish and others plead that we remain nonviolent when violence is committed against us. Tamir Rice’s death was violent, and we experienced violence again when the grand jury decided to let his killer walk free. They can’t expect Rice's family and friends and community to hold hands and sing hymns in response to this. We’ve been doing that for years. It isn’t working.

While Budish was cherry-picking King quotes, he missed this one, given at Michigan's Grosse Pointe High School just weeks before he was assassinated:

It is not enough for me to stand before you tonight and condemn riots. It would be morally irresponsible for me to do that without, at the same time, condemning the contingent, intolerable conditions that exist in our society. These conditions are the things that cause individuals to feel that they have no other alternative than to engage in violent rebellions to get attention. And I must say tonight that a riot is the language of the unheard.

Budish's words are irresponsible and hackneyed. Elected officials cannot continue using King as a source of empty platitudes while their continues to be no accountability for injustice. Budish represents the violence against Tamir Rice as the county executive, so he cannot in turn plead for peace. Martin Luther King’s call for nonviolence was directed at the police state, juries, and white supremacist groups, not toward the people against whom violence is employed. In this case, I believe rioting is an appropriate response.