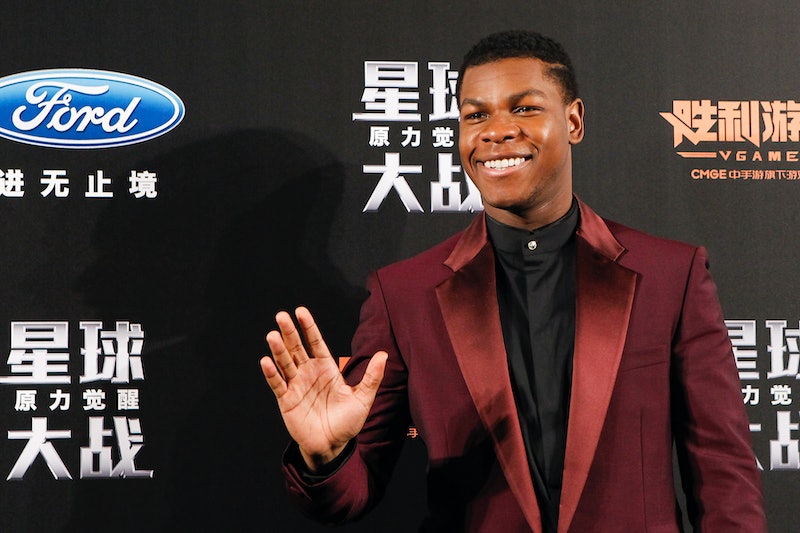 Since the first photos of Star Wars: Episode VII — The Force Awakens was released on Dec. 18, the world has had its eyes on franchise star John Boyega. In addition to being a major part of the new film, he's also the first black man to land a major role in the Star Wars franchise. Boyega has handled the near instant fame that has come with starring in the movie incredibly well: When prejudiced haters directed racist comments toward him after the premiere of The Force Awakens trailer, he quickly shut them down — and since the film has been released, he has gone on to show just how much he loves being a part of the Star Wars universe by showing up to screenings to surprise fans. His enthusiasm is undeniable, which is great, because it looks like he's going to have plenty of sequels ahead of him.

More than his love for the film and the fans, though, Boyega has proven time and again that he's proud of his roots. The actor grew up in London as the son of Nigerian immigrants, and recently, even took to an interview with the New York Times to say, "I’m grounded in who I am, and I am a confident black man. A confident, Nigerian, black, chocolate man. I’m proud of my heritage, and no man can take that away from me. I wasn’t raised to fear people with a difference of opinion. They are merely victims of a disease in their mind. To get into a serious dialogue with people who judge a person based on the melanin in their skin? They’re stupid, and I’m not going to lose sleep over people." It's amazing to see someone so vocal and proud of where they came from.

Boyega has said that when he told his dad that he'd won the role of Finn, his father had to admit that he didn't know what Star Wars was. Star Wars seems like such a huge, cultural phenomenon but it wasn't quite as big of a deal in Africa as it is in other parts of the world — until now.

Casting Boyega as the leading man in a film that has already made $1.6 billion worldwide has not only opened the film up to a new generation, but also made the film more significant to other cultures — including to Nigerians. There has been a growing interest in so-called nerd culture in Nigeria in recent years (there's even a Lagos Comic-con), but Boyega's participation in the franchise seems to be sparking a renewed interest in the Star Wars franchise. A recent article by NPR features interviews with Nigerian moviegoers who admit that Boyega's presence makes the film more relatable. One Nigerian woman quoted in the article said: "It's significant to me because my son was sitting next to me and it was a big deal for him to see a character who looks like him. When I was little I never had that."

Star Wars has always showcased different life forms — from Ewoks to Wookies to Droids — interacting peacefully. It's about time that the diversity in the cast caught up. Clearly, with the movie projected to become one of the highest-grossing films of all time, the world was ready for a fresh take on the force.