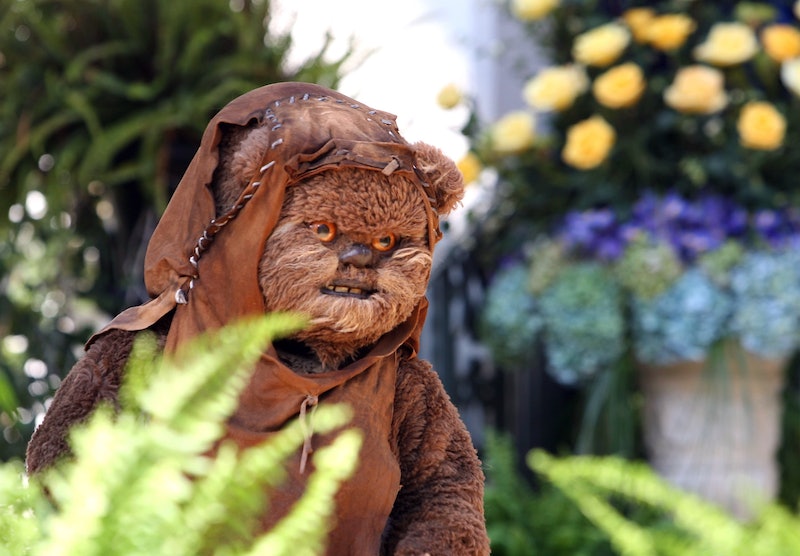 Though they may not be the most popular characters in the franchise, I'm pretty sure it's safe to say that Ewoks are the cutest characters in Star Wars. I, of course, mean no offense to Chewbacca, whose doglike tendencies make him the greatest companion in the galaxy. (I wonder if he plays fetch?) Ewoks, with those adorable little teddy bear faces, made their mark on the series initially in Return of the Jedi (aka, the third film in the one of the only franchises with a third film that matters) — but, turns out, that wasn't the only Star Wars-related project they were featured in. Thank goodness for the Internet, because Business Insider clued me in on a Star Wars made-for-tv movie that is features mostly Ewoks. Specifically, it's called Caravan of Courage, and it came out in 1984, a year after The Return of the Jedi.

As any sensible person would, I immediately felt all sorts of feelings. Where is this movie? How can I watch it? Does it involve any sort of dance party that was as fantastic-looking as the party on the Ewok community's home planet of Endor at the end of Return of the Jedi? It was a lot of feelings to take on and I don't want you to have to go through the same things. So, while this is going down, I'm going to walk you through what you're feeling:

"Huh," you'll probably think to yourself. "That's certainly interesting. Those little guys are adorbs. And they do help take down the Empire." You'll scratch your chin, feeling thoughtful.

I mean, who wouldn't be happy, joyous even? Those guys are so teensy-tiny I want to put them in my pocket and wear them out on the town.

Confusion then sets in. If those guys are so teensy-tiny how are they able to kill all those Storm Troopers?

Since this movie came out so long ago I'll never be able find Caravans of Courage on DVD! What a sad day.

Wait, and how would the Ewoks' gorgeous forest home survive the backlash of the Death Star (aka, the size of a moon) exploding?

The bright side of this whole thing is the Internet has everything. So there's got to be a version of it out there somewhere. Or maybe there is a Blockbuster in an underground bunker somewhere?

The Ewoks will live on through your discovery. I will find Caravan of Courage. I will watch it, preferably while babysitting because it is almost certainly made for children, and I will relive the cute all over again.

Don't worry friends. It's all going to be OK!