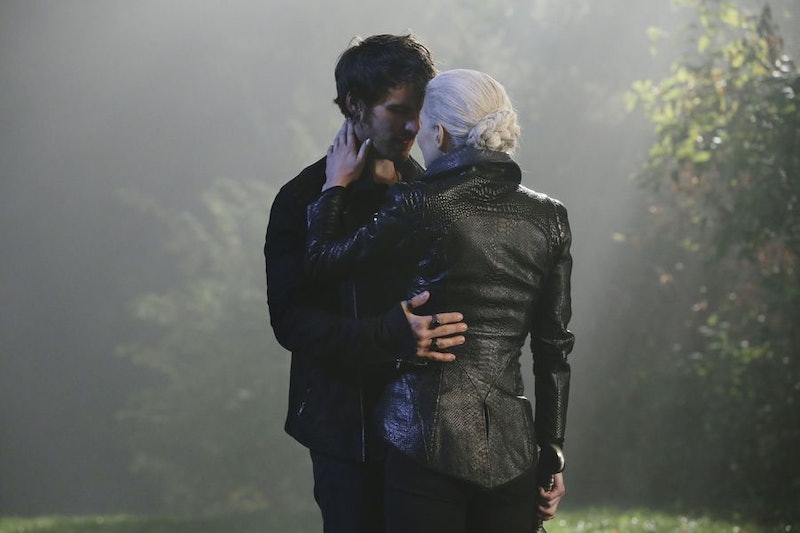 Does anyone else feel like 2015 was particularly bleak for those of us who love to love? Forget hookups and breakups, let's talk about how stressful 'shipping was on television in 2015. It's hard work being a fan of fictional relationships and this year's cliffhangers made it even more painful.

Whether your favorite duos went through a rough patch, almost died, or grew into something you didn't recognize, 'shipping can be a tricky business. Gone are the days when "will they or won't they" was the most popular form of dramatic tension for romantic couples on television. Torturing fans who just want their favorites to cuddle and eat soup comes in many shapes and forms. Not everybody can be as great as Peggy and Stan in the final season of Mad Men, I suppose! Then there are shows like Game of Thrones, where I honestly can't say I even have an active 'ship anymore. I'm too stressed out that my favorite characters are going to make it to the end of the episode or find themselves in a marriage that's not literal torture. There's no time for anything else!

So in tribute to our ever-skipping hearts, here are some of the couples this year that stressed us out and made us all hold our breath — for love!

1. Connor/Oliver, How To Get Away With Murder

At the end of How To Get Away With Murder Season 1, we learned that Oliver is HIV positive, which was sad enough news for this fated pairing. Then, Oliver got involved in the Keating drama and seemingly abducted by a murder suspect — which had Connor freaking out and me hugging a pillow for support until we knew he was OK.

It was bad enough that Walking Dead fans went over a month thinking that Glenn's guts were spilled out under a dumpster. What made it worse was hearing that Maggie is pregnant, holding onto hope that Glenn is still out there, and then not even reuniting in the season finale.

3. Emma/Hook, Once Upon A Time

We just can't have nice things on Once Upon A Time, can we? First, Emma Swan turned herself into the Dark One after admitting she loved Killian. Classic fear of intimacy, or feat of heroism, depending on how you look at it. Then she put the Darkness in Hook, and basically killed him? My nerves!

I mean, when are they not stressful?

I am in shock with the turns that The Mindy Project took this year after its move to Hulu. What happened to the fun, body rolling Danny? Why have his traditional preferences turned him into such a jerk? It's been incredibly stressful watching Mindy Lahiri try to force herself into a stay-at-home Mom life that doesn't suit her, and I'm over it.

As always, I direct those who prefer these two to be platonic "for once" to shows like Elementary and 30 Rock in which characters pair up without kissing. This Sleepy Hollow pair belongs together, and 2015 kept the drama up to 11. Like Hook, Abbie is now in some kind of afterworld.

Sure, just about every Pretty Little Liars 'ship has been through the ringer, but Haleb was a roller coaster in 2015. They've gotten together and broken up four times. Now Hanna's engaged to someone else? Why!

If you're not watching Agents of S.H.I.E.L.D. you are missing out on one of the best acted and most stressful relationships on television, period. This year the two science dorks were separated by entire planetary systems, where Simmons understandably developed feelings for a fellow survivor, and even when she and Fitz finally kissed, the moment was full of regret and pain. They really are cursed!

I'm like actually too stressed out by this one to talk about it, so let's reconvene after we know Felicity's OK.

Stop toying with me, show! This love triangle is a constant roller coaster.

Fans of Marvel comics know that Jessica Jones and Luke Cage have a history. On Netflix's Jessica Jones, the two were on fire (sometimes literally), but stressed me the eff out first because Jessica was self-destructing by withholding information, and then later when we learned that Luke had been Kilgrave'd. This whole show was stressful, but rooting for Jessica Jones and Luke Cage to get it together was just another stressful 'shipping moment to add to the 2015 pile. Let's hope that 2016 brings some peace and/or closure to all of these couples!

More like this
You’ll Most Definitely Recognise Kyle Pryor’s Soap Star Girlfriend
By Sophie McEvoy
The 'Kenan & Kel' Reunion On 'SNL' Took A Dramatic Turn, Thanks To Keke Palmer
By Brad Witter
Keke Palmer Just Announced She's "Going To Be A Mom" On 'SNL'
By Brad Witter
This 'White Lotus' Symbol Could Hint At A Major Character's Death
By Grace Wehniainen
Get Even More From Bustle — Sign Up For The Newsletter