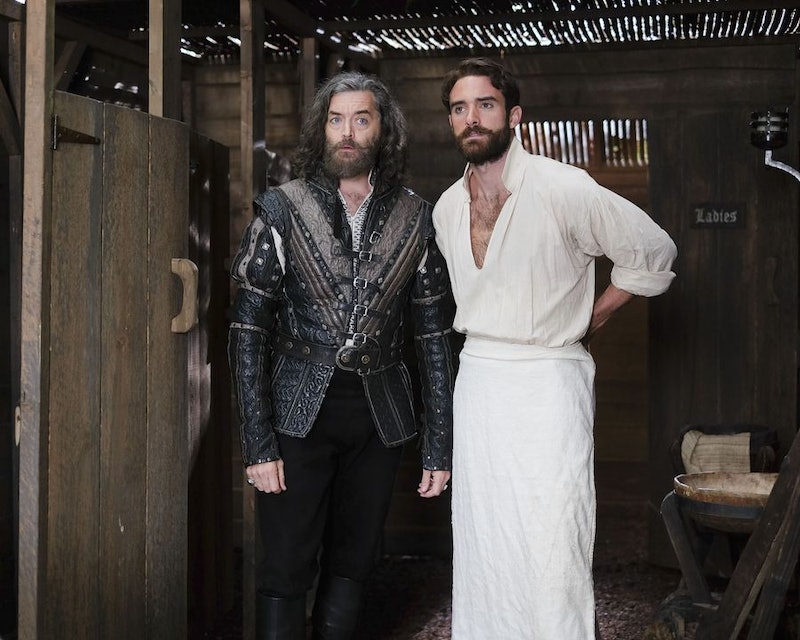 Fans of the show Galavant waited with baited breath to see if the show would be renewed for a second season. The show's ratings labeled it "certain to be canceled" by TV by the Number's Cancellation Bear, but like a rising phoenix, it's back and better than ever. Part of the charm of Galavant is how self-aware it is. The proof is in the title of the Galavant Season 2 premiere episode, "A New Season aka Suck It Cancellation Bear," which pokes fun at the fact that Cancellation Bear predicted it as a one season show. But, Galavant is hitting all of the right notes in its premiere, especially with the increasingly tongue-in-cheek opening song "A New Season."

The series picks up where Season 1 left off. Galavant and King Richard are on a pirate ship while Isabella sits in a dollhouse and Madelena and Gareth rule the kingdom. The cast starts the season off with "A New Season," a song about, well, basically how it is a miracle that this show is even seeing a second season.

The song is laced with lyrics like, "ignore the pageants... skip the football matches... and the globes made out of gold... screw all those apprentices and every bachelorette..." proving that this show not only knows how to produce hilarious content but also not take itself too seriously. Because, while people will be watching The Bachelor, and will not skip football games, or the Golden Globes (January's top hitters on television), they should give Galavant a chance because writing like this doesn't come by often.

Isabella also makes a strong feminist argument in the premiere's song that "as a feminist" she doesn't need Galavant, but she does need to figure out how to get out of the dollhouse where she is being kept to marry her prepubescent cousin. It was a bit worrisome when Isabella was put in the dollhouse at the end of Season 1, hoping for a man to come and rescue her. But, the humor that Galavant explores is satirical and intentional, because realistically Isabella doesn't need anyone to rescue her from the dollhouse.

As the song says, "give into the miracle that no one thought we'd get!" because Galavant is back and it is better than ever.