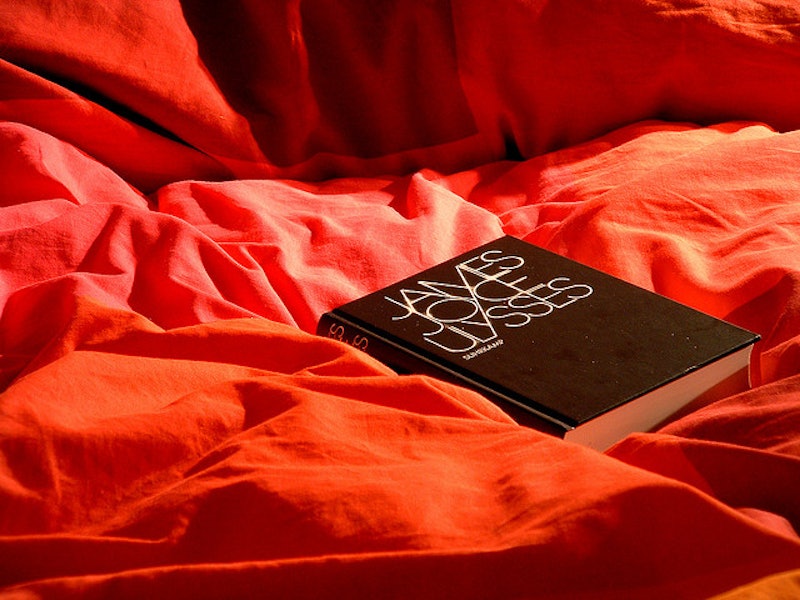 It's happened to ever book lover. You're curled up with a book, and you turn the page to find that things are starting to get a little hot and heavy. Your eyes keep scanning, absorbing every touch and every kiss, until finally it's there, the big finale. If your an avid reader, you've come probably come across more than one orgasm scene in literature , and although some aren't as well written as others (and some are just plain awful, let's face it), they have all been written with the same goal in mind: to capture that magical moment of pleasure and bliss.

Though sex is a natural part of human nature, orgasm scenes are notoriously hard to write. The experience is passionate and deeply intimate, and trying to portray something so personal can often times be tricky and a little awkward. Sex is complicated, and so is writing about it, but that's not to say there aren't any hot sex scenes in books either. There's no doubt books can be big turn-ons, too, and not just romance and erotica, either. Classic literature has it's fair share of orgasmic writing, and some of it is pretty steamy, too.

Here it is, the moment you've been waiting for: nine orgasm scenes in classic literature, for your reading pleasure.

She was giving way. She was giving up...she had to lie down there under the boughs of the tree, like an animal, while he waited, standing there in his shirt and breeches, watching her with haunted eyes ... He too had bared the front part of his body and she felt his naked flesh against her as he came into her. For a moment he was still inside her, turgid there and quivering. Then as he began to move, in the sudden helpless orgasm, there awoke in her new strange thrills rippling inside her. Rippling, rippling, rippling, like a flapping overlapping of soft flames, soft as feathers, running to points of brilliance, exquisite and melting her all molten inside. It was like bells rippling up and up to a culmination. She lay unconscious of the wild little cries she uttered at the last. But it was over too soon, too soon, and she could no longer force her own conclusion with her own activity.

I recall certain moments, let us call them icebergs in paradise, when after having had my fill of her —after fabulous, insane exertions that left me limp and azure-barred — I would gather her in my arms with, at last, a mute moan of human tenderness (her skin glistening in the neon light coming from the paved court through the slits in the blind, her soot-black lashes matted, her grave gray eyes more vacant than ever — for all the world a little patient still in the confusion of a drug after a major operation) — and the tenderness would deepen to shame and despair, and I would lull and rock my lone light Lolita in my marble arms, and moan in her warm hair, and caress her at random and mutely ask her blessing, and at the peak of this human agonized selfless tenderness (with my soul actually hanging around her naked body and ready to repent), all at once, ironically, horribly, lust would swell again — and "oh, no," Lolita would say with a sigh to heaven, and the next moment the tenderness and the azure — all would be shattered.

She would fain have cried to him chokingly, held out her snowy slender arms to him to come, to feel his lips laid on her white brow, the cry of a young girl's love, a little strangled cry, wrung from her, that cry that has rung through the ages. And then a rocket sprang and bang shot blind blank and O! then the Roman candle burst and it was like a sigh of O! and everyone cried O! O! in raptures and it gushed out of it a stream of rain gold hair threads and they shed and ah! they were all greeny dewy stars falling with golden, O so lovely, O, soft, sweet, soft!

The material of her riding habit caught on his velvet coat. She tipped back her head, her white throat swelled with a sigh; and weakened, bathed in tears, hiding her face, with a long tremor she gave herself up to him.The evening shadows were coming down; the horizontal sun, passing between the branches, dazzled her eyes. Here and there, all around her, patches of light shimmered in the leaves or on the ground, as if hummingbirds in flight had scattered their feathers there. Silence was everywhere; something mild seemed to be coming forth from the trees; she could feel her heart beginning to beat again, and her blood flowing through her flesh like a river of milk.

It was Heaven. I was the earth, the mountains, the tigers, the rivers that flowed into the lakes, the lake that became the sea. He was thrusting faster and faster now, and the pain was mingled with pleasure, and I could have said: "I can't take any more", but that would have been unfair, because, by then, he and I were one person.

6. For Whom the Bell Tolls by Ernest Hemingway

7. Gone with the Wind by Margaret Mitchell