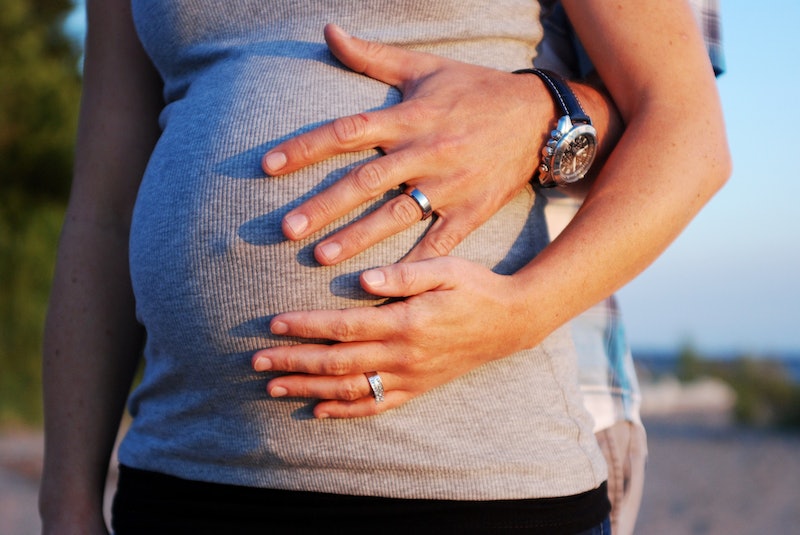 If like the Grinch, your heart has grown cold and distant post holiday season, you might want to watch this video of a deaf man finding out his wife is pregnant. I promise that it will take you from grumpy to being tearful and hopeful in a matter of minutes. It really did a number on me. It might have been the fact that I was marathon-watching videos of soldiers reuniting with dogs for about an hour before seeing this one — but I digress. Somehow, the Internet has taken a break from FAIL videos and dads falling off hover boards long enough to let forth this beautiful creation in the form of a reddit user's cousin telling her deaf boyfriend he was going to be a father.

We tend not think of deafness as an issue, while the reality is that it affects 50 million Americans today. This might be due to the fact that unlike being blind, being deaf isn't obvious to us and is actually harder to notice right away. It only becomes truly apparent when we are communicating with one another. According to the Hearing Health Foundation, the number of Americans with hearing loss has doubled from 2000 to 2015. This is due to many factors including overexposure to loud noises and age. This nifty infographic below will put the numbers in perspective.

Today, there are approximately 70 million Americans who use ASL as a primary or first learned language. We've seen other viral ASL videos that show just how beautiful and intricate the language is, even to those who don't understand it — but watching this man unwrap what can be considered the greatest gift over the holidays really makes you smile. Here are some of my favorite parts of this video broken down!

With a little hesitation, the man shakes the bag while his wife starts shooting him on her camera phone. He signs "I wonder what's in it?" Personally, I am always suspicious of people giving me gifts and then taking out their phones. I assume it's going to be something that will embarrass me on the Internet forever. I guess these two love and trust each other or whatever...

He signs "paper"as he pulls out random stuffing and reaches in to grab something. Side note: we as a society need to figure out a better way to wrap things inside of bags. Seriously. There is always extra random paper that has to be pulled out and shuffled around. Science — GET ON THIS.

I love the idea that his wife might have done all of this just to give him a candy bar. I mean, I would consider this a job well done.

I don't even know what that bottle is, but it clearly started to give away the big reveal. Just look at his face! Oh my gosh, all the #feelings are starting to creep up.

I won't spoil the big reveal of the pregnancy test so you will just have to watch the full video. I will say that I got emotional and my throat was all clumped up when he asked "I'm going to be a Dad?". So beautiful. This child is going to be so loved. All of the feels. ALL OF THEM.

More like this
Thoughtful Mother’s Day Jewelry That’ll Hit Mom Right In The Feels
By Avery Matera
The Viral TikTok “30,000” Sound Fits Nearly Every Scenario
By Courtney Young
Kris Jenner’s Advice For Kim Kardashian Is Going Viral On TikTok
By Courtney Young
8 TikTok Pasta Recipes To Try Out At Home
By Emma Garza
Get Even More From Bustle — Sign Up For The Newsletter