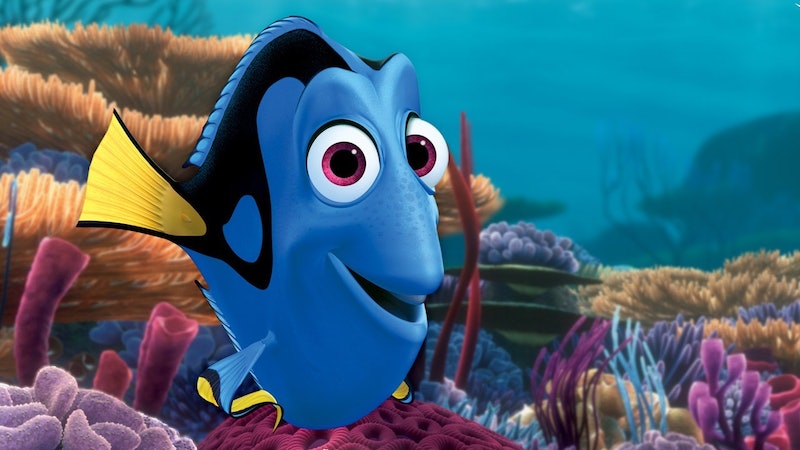 I'm not too proud or adult to admit how excited I am for a sequel to Finding Nemo, so I'd be lying if I said I didn't give an audible gasp when I saw the first image from Finding Dory, introducing two new characters to the franchise. Obviously we already know Ellen DeGeneres as Dory herself, from the first movie, but now we're meeting two of her ocean-bound pals, a beluga whale named Bailey, who's voiced by Modern Family's Ty Burrell, and a friendly whale shark named Destiny played by Kaitlin Olson, who plays Sweet Dee on It's Always Sunny In Philadelphia. I love that they aren't just pulling big, A-List names for these roles; that they're actually thinking about who has appealing voices and the comedic chops to pull the characters off, and going with that. Both Olson and Burrell have really impressed me on their respective shows, so now I really can't wait until Jun. 17, 2016, when Finding Dory hits theaters. Even more so than before.

You've probably been keeping as up-to-date as I have on the clues to the storyline that have trickled down to us so far, but, for those who aren't aware, Finding Dory picks up six months after Finding Nemo ended, and centers around Dory's search for her long-lost parents. This journey apparently takes her to a marine life rehab facility, where Destiny and Bailey crop up to play their own role in the adventure. According to Burrell, speaking to Entertainment Weekly , "My character isn’t great at his own sonar capability, and Destiny has trouble swimming straight," so I'm anticipating some water-based slapstick from this quirky pair, who Olson says can barely get along:

We totally get on each other’s nerves. I like to think I’m a shark, but Bailey calls me a whale, and I make fun of his head, because it’s gigantic. [...] We would just play off each other. Though to be honest, I was probably the boss of the entire situation, because I always like to be.

Oh, man. They haven't even revealed all that much about the movie, and already I'm so psyched for it. I just have a picture in my head of how amazing it's going to be, which just happens to match perfectly with this first image of Dory, Destiny, and Bailey, that was released.

Clear my schedule, secretary! I officially have a date with childlike wonder on Jun. 17.