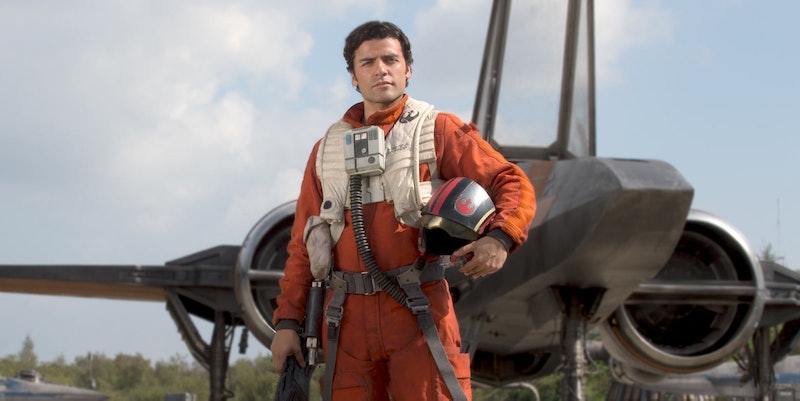 When I walked out of my opening night screening of Star Wars: The Force Awakens, my emotions were all over the place. As a long-time fan of the series, it was overwhelming to be back with the original trilogy characters I met as a child and exhilarating to meet new ones, who have already succeeded in modernizing a massive franchise. I knew going in to the movie that Star Wars in 2015 would be much more racially diverse than in the past, but I had no idea that one of the leads would also be refreshingly ambiguous in his sexual orientation. As many fans have noted, it's possible that Oscar Isaac's Poe Dameron is the first LGBT character to appear in a Star Wars film. Though his preferences aren't stated and there's no label assigned to him in the movie itself, the fact that Poe's sexuality is left open to interpretation is already a huge deal.

My own reading of Poe's character as not strictly straight comes primarily from his interactions with Finn. The chemistry between the fighter pilot and the escaped Stormtrooper is instantaneous and palpable. As I watched the movie the first time, I wondered how Isaac and John Boyega had been directed to play their friendship, because I'm used to scenes between young, male leads in action movies playing out differently. The gulf of personal space between them is usually wider; there's typically more bro-y jesting; or one or both of the characters might make specific reference to his heterosexuality. You know, so audiences don't get the "wrong idea." (And you can pretty much forget a flirty lower lip bite like the one Poe gives Finn on the grounds of the rebel base...) As the movie went on, I became more and more sure that director J.J. Abrams and the actors simply didn't care if attraction was one possible interpretation of the Finn/Poe friendship. Alternatively, they might even have been encouraging it.

When Boyega, Isaac, and Daisy Ridley appeared on The Ellen DeGeneres show in December, DeGeneres asked them if The Force Awakens set up any major romances between their characters. Isaac's answer went straight to the heart of every Finn/Poe 'shipper and every Star Wars fan who wants to believe that an LGBT character can be present and acknowledged in this monumentally mainstream film series. Said Isaac,

"I think it's a very subtle romance that's happening. You know, you have to look very closely. You have to watch it a few times to see the hints. But there was. At least I was playing romance."

And Boyega chimed in with his assent. Theory: proven.

Whether or not Finn/Poe actually happens in future Star Wars installments, I hope and pray that Poe Dameron won't be saddled with a girlfriend just to appease the small-minded. Could Disney and Lucasfilm go all out and specifically identify him as an LGBT individual? Or will his orientation remain open to viewer analysis? The former would be ideal, but even the latter would be revolutionary. A friend of mine told me that some of her very young relatives — who don't even know the terminology yet for all the stops on the spectrum of sexual orientation — came out of the theater convinced and thrilled that Poe and Finn "love" each other. It was simple as that to them.

Representation is important. Anyone who tells you otherwise is probably someone whose race, gender, and orientation are represented in nearly every piece of media they see. Film has always been lacking; GLAAD's Studio Responsibility Index report for 2014 showed that only 17.5% of major film releases included one or more LGBT character, and it should also be noted that when those characters were present, the majority of them were white. If Poe Dameron were to be counted in the 2015 survey, he'd be representing not only as an LGBT character in the biggest movie of the year, but also as an LGBT character of color in the biggest movie of the year. (Isaac is Guatemalan-American.) Even better: Poe is kind, brave, capable, and smart, a true Star Wars hero in every aspect. Countless children and families will watch this movie over the years, and the ripples of acceptance and identification that a character like Poe Dameron could generate in fans of all ages is just tremendous.

Poe Dameron is already starting much-needed conversations about finally inviting LGBT characters to the family-oriented sci-fi/fantasy party. Ideally, the upcoming Star Wars films will make his orientation more explicit, but even if it doesn't, the continued success of the franchise will hopefully encourage other studios to follow suit in putting characters of all sexual orientations on-screen.

More like this
Adam Lambert Called Out The George Michael Biopic Over Potential Casting
By Sam Ramsden
Netflix Shut Down 'Bridgerton' S3 Rumours About A “Very Dark” Storyline
By Bustle
Bill & Frank’s 'The Last Of Us' Episode Has Twitter Emotionally Wrecked
By Alyssa Lapid
Your Guide To Watching 'Everything Everywhere All At Once' In The UK
By El Hunt and Sophie McEvoy
Get Even More From Bustle — Sign Up For The Newsletter
From hair trends to relationship advice, our daily newsletter has everything you need to sound like a person who’s on TikTok, even if you aren’t.