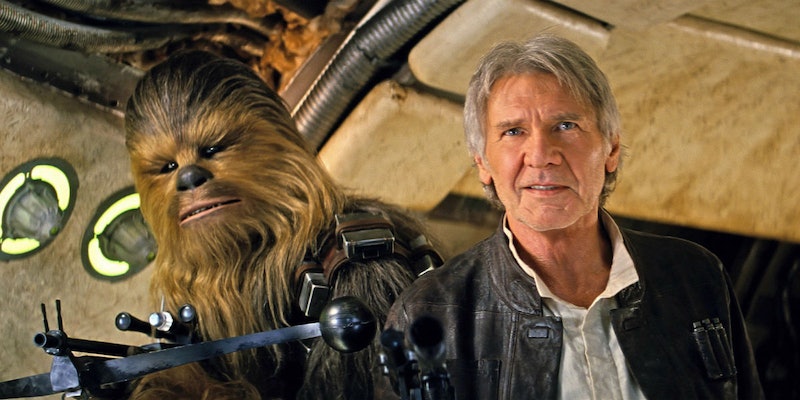 In case you haven't heard, there's a new Star Wars movie coming out next month. Who knew, right? OK, obviously I'm being facetious. Star Wars Episode VII: The Force Awakens is going to be huge, not just because it has an extremely long title, but because it features several returning Star Wars characters from the franchise's most beloved days. These links to the past, as well as the absence of George Lucas, are what have Star Wars fans salivating. After the much-maligned prequel movies that plagued the early-2000s, fans are optimistic that The Force Awakens will be the Star Wars movie they've been waiting for since Return of the Jedi. But which Star Wars characters are coming back that have everyone going so crazy?

I should probably state that even though The Force Awakens does feature lots of classic characters, the new faces in the movie are probably going to be the focus. There's Daisy Ridley's scavenger, Rey; John Boyega's reformed Stormtrooper, Finn; Oscar Isaac's fighter pilot, Poe Dameron, Adam Driver's Darth Vader-loving villain Kylo Ren, and Gwendoline Christie's seriously badass Captain Phasma. These characters alone would probably be enough to make this movie a huge blockbuster, but director J.J. Abrams has seriously outdone himself by stacking the cast with a healthy mix of the young and old. So here they are, every classic character returning for The Force Awakens (that's been revealed so far).

Carrie Fisher is back as Princess Leia, though much of her role is unknown (just like everybody else's). She is seen hugging Han Solo in the trailer, so it could be that these two are still an item after 30 years.

Perhaps the most mysterious returning character is the protagonist of the original trilogy, again played by Mark Hamill. The Jedi Master has been largely absent from the film's marketing, and that's no accident according to Abrams. The hot rumor going around suggests that Skywalker may have gone over to the dark side, and that's why he's being held back. We'll find out next month.

Han Solo is all over the trailers for the film, and it's no surprise why. He's arguably the most popular character in the franchise, and actor Harrison Ford has had the most successful career of any Star Wars actor by far. Here's hoping the lovable rogue gets behind the wheel of the Millennium Falcon at some point in the new film.

You can't have Han Solo without his BFF. Peter Mayhew is once again playing the hairy giant, and I have no problem saying that the Wookie has aged incredibly well.

Anthony Daniels is back as the galaxy's most British droid, and he's sporting a new red arm. Why does he have a new arm? Did he borrow it from Iron Man? Is Disney cross-promoting? These are some of the important questions I have about the new movie.

Although he'll be competing with the younger, cuter droid BB-8, R2 is still the droid after my own heart. Kenny Baker returns to portray him for the seventh time at the age of 80.

This Rebel Alliance commander wasn't in the original trilogy much, but his "It's a trap!" quote has gone on to become one of the series' most iconic moments. Here's hoping that he has another scene-stealing turn in The Force Awakens when actor Tim Rose reprises his role.

A fairly obscure character, this little fella co-piloted the Millennium Falcon with Lando Calrissian in The Empire Strikes Back. Original puppeteer Mike Quinn has confirmed that he'll be back as the character, in what is probably not much more than a cameo.

His helmet is in the trailer, but there are also rampant rumors that his ghost makes an appearance as well. Admit it, "The Imperial March" just started playing in your head when you read that.

That's who's been revealed so far, but there could certainly be more. Abrams definitely has a lot of respect for the original Star Wars trilogy, and it seems like he's going to make as many connections to them as he can. I'm thinking that will turn out to be a good decision.