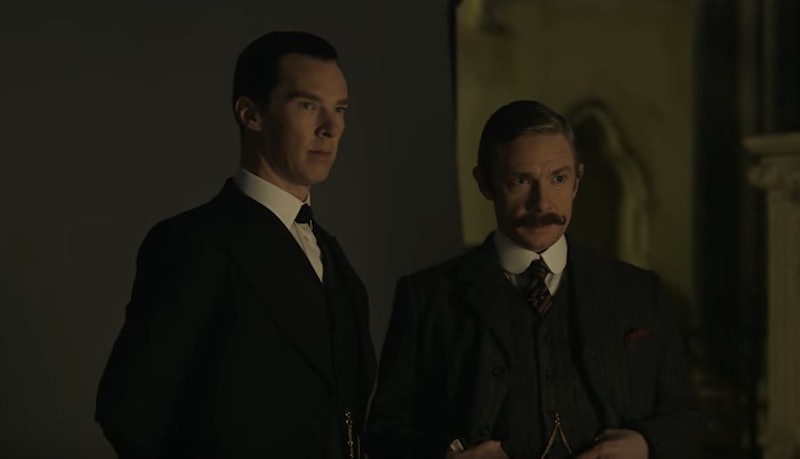 As if we didn't already have enough reasons to look forward to 2016, that's the year when we get more Sherlock! And, in anticipation of that happy moment, the creators of the show have just released a behind-the-scenes promo video from "The Abominable Bride," which will air on PBS on Jan. 1, 2016. Really starting the year off right, if you ask me. And also finishing 2015 up right, by giving us some sweet relief from our anticipation in the form of this sneak preview. In case you didn't realize this — probably because you have to keep all things Sherlock at a healthy arm's distance, or be completely sucked into its world — but the special is set in Victorian times. One of the coolest things about this version is how modern and accessible it is, so I'm really excited to see how that translates when the show is placed back in Sherlock Holmes' original time period.

Creator Steven Moffat released the video in part to explain how they went about transforming today's London for filming, but there were also some details about "The Abominable Bride" that snuck in, and, if there's one thing I've learned from Sherlock himself, it's how to catch each and every one. So here are 12 things I've learned so far about the upcoming special, to give you an idea what to expect! Take a look at the trailer below and see if you caught the same things I did.

1. Dr. Watson Will Be A Bit More Formal

That mustache makes Martin Freeman look all kinds of prim and proper, and it makes sense to me that his relationship with Sherlock would be a little more stilted back in the day, because its warmth and comfort up to now feels very 2010s. Things were different in those days.

2. Sherlock Will Be Almost Exactly The Same

Benedict Cumberbatch says in the video that his interpretation of modern Sherlock draws a lot on those Victorian sensibilities, so it didn't feel that odd to him to be in the old-timey setting. Just a different hat and a different coat.

3. Their Apartment Will Be Different

They had to completely re-make the 221B set.

4. The Mystery Will Be On A Smaller Scale

Because they don't have access to global networks like transportation or the Internet or anything, so whatever goes down will likely be quite close to home.

No guarantee, but how else do you explain those costumes?

Please let that be Irene Adler's silhouette that I see there in the mist.

9. Dr. Watson Seems To Be Married In This World

To his real-life partner and normal-Sherlock wife, Amanda Abbington, who plays Mary Morstan.

11. Someone Gets Stabbed With A... Bottle Opener?

YES PLEASE. To all of this. Can't hardly wait for this to come back to my eagerly-awaiting eyes and ears and brain and embrace on Jan. 1!