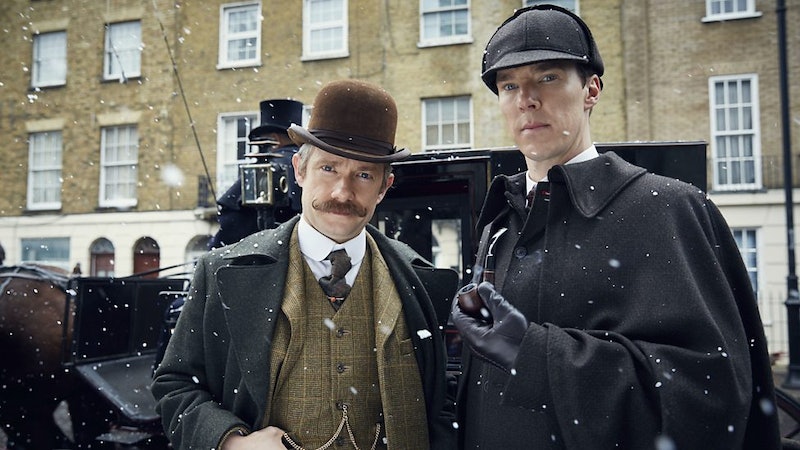 Everyone's favorite high-functioning sociopath, Sherlock, will be back on television soon, and I have to say — his return is already shaping up to be brilliant. Maybe that's because, Saturday, PBS officially announced Sherlock's 90-minute holiday special, Sherlock: The Abominable Bride, will premiere Jan. 1, 2016. Talk about ringing in the new year! Seriously, I can't think of a better way to nurse my imminent New Year's Day depression than tuning in to see Sherlock and Watson deduce things and have epiphanies and wear hats!

Although according to The Hollywood Reporter, Season 4 will not go into production until Spring 2016 — which means that Season 4 in its entirety will not premiere until probably early 2017 — at least us Sherlockians have something to tide us over. The special will only last 90 minutes, but you better believe it's going to be 90 minutes of pure Benedict Cumberbatch bliss. Plus, this special — set in the 19th century instead of the 21st — practically oozes old-school Sherlock nostalgia (old school as in you know, the original books by Sir Arthur Conan Doyle from 1887). Pair that with these two leading men, the genius writers behind Sherlock the series, and some gothic style buildings? I mean, how does one not get excited for this? I'd like to Sherlock solve that mystery.

So in honor of the Sherlock special premiere date being set for January 1st, here are all the ways you can celebrate the new year with Sherlock:

Dress Up As Sherlock & Co.

For your New Year's Eve/Day parties, channel your inner Sherlock! Wear dark colors and long trench coats, wrap scarves around your neck, and carry a pipe. Don't forget the deerstalker hat (and to thank me later).

The New Year is always a good time for change, so why not change it up in your apartment? Incorporate some old school-meets-new school London styles — like, maybe purchase a flag of England throw pillow for your couch, or pick up some trinkets from your local thrift store (like vintage magnifying glasses, or stationary).

Have A Murder Mystery Party

Invite all your friends over for a Murder Mystery-inspired New Year's Eve party. Basically, when your guests arrive, you give them a character to play. One of them will be a "murderer." Then, you all try to figure out who the "murderer" is!

Sorry, I mean deduce. Deduce who the murderer is.

Make It Your Resolution To Re-watch The Series

Though according to Sherlock, "sentiment is a chemical defect found in the losing side," I've no qualms whatsoever about being Sherlock sentimental... which means that a marathon re-watch of all Sherlock eps is a celebratory must.

Especially appropriate for that New Year's Eve murder mystery party I described above: "Shut up, everybody! Shut up! Don't move, don't speak, don't breathe, I'm trying to think. (Insert name of person), face the other way. You're putting me off." Or another favorite, "You do see. You just don't observe," when someone's interrupting your Sherlock marathon, even though it's clear you are not to be disturbed.

However you choose to celebrate the reprisal of Sherlock and the gang, it doesn't take a detective to figure out that this will now be the best New Year's Day ever.