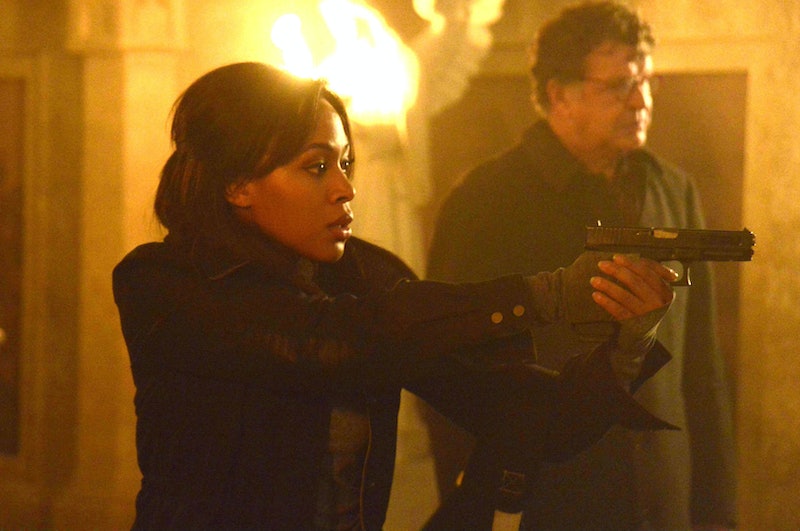 Monday night, Fox's runaway hit Sleepy Hollow finished up its first season gallop with two back-to-back episodes, the second of which ended with a spectacularly insane cliffhanger with absolutely no solution for our heroes in sight. Detective Abbie Mills' seemingly inescapable "end" comes at the hands of a life-sized dollhouse in which she finds herself trapped at the end of the episode.

That house, with all its plastic, over-the-top accoutrements, is not only Abbie's temporary prison, but a complete and total physical expression of our relationship with the series. Just hear me out and let us all be ridiculous together, in honor of this campy drama.

For context's sake, the scene is set up as such: Abbie stays behind in purgatory so that Ichabod may whisk his wife, a witch named Katrina, off to the world of the living so that she might prevent the second horseman of the apocalypse, War, from emerging and allowing all hell to break loose. While in purgatory, Abbie is being pursued viciously by the series' chief villain Moloch until she falls through the ground and into a life-sized replica of her childhood dollhouse. Sure, that's nuts enough already, but there's more.

The dollhouse is the home of her memory as well as her younger sister Jenny's and those memories take the form of Abbie and Jenny as young girls. Abbie talks to her younger self, finds that Moloch stole an integral memory from her brain, but that she's stuck in this ridiculous dollhouse for all eternity, unable to get closure on her supernatural journey or use her found memory to help her partner in crime, Ichabod.

As Sleepy Hollow fans, this final sensation should feel rather familiar. The camera sweeps back, revealing Abbie to be trapped in the lower right corner of the pink and purple dollhouse. The image is utterly ridiculous — especially knowing that her prison is a realm of giant pink and neon green plastic chairs adorned with tiaras, windows with painted-on drapes, and wardrobes with comically large button handles. The visual's lack of seriousness is so discordant with the severity of Abbie's fate, yet we hang on, fearful that she'll never escape because the sheer nature of Sleepy Hollow itself has conditioned us to this uneven reality.

This dollhouse is where we live when we watch and enjoy Sleepy Hollow, one of the most honestly and unabashedly cheesy series on television that still manages to feel as if it's got some semblance of substance. Sleepy Hollow is a colorful, stupid dollhouse imbued with the power to imprison the Witness sent by God to rescue the world from sheer destruction. It's a series with an empty appearance and dark weight. We marvel at the unrealistic logic, the unbearable ease with which chance leads our heroes to answers, and the arrogantly matter-of-fact explanations of creatures that are, for all intents and purposes, complete poppycock, knowing full well how absurd our devotion is.

Like the pink accents of the dollhouse, the truth of the series' outlandishness is slapping us in the face. Yet, like Abbie in that bottom window, we're powerless to escape. But if Sleepy Hollow continues to titillate us the way it has all season, odds are we'll live happily in this absurd little dollhouse as long as the series will have us.