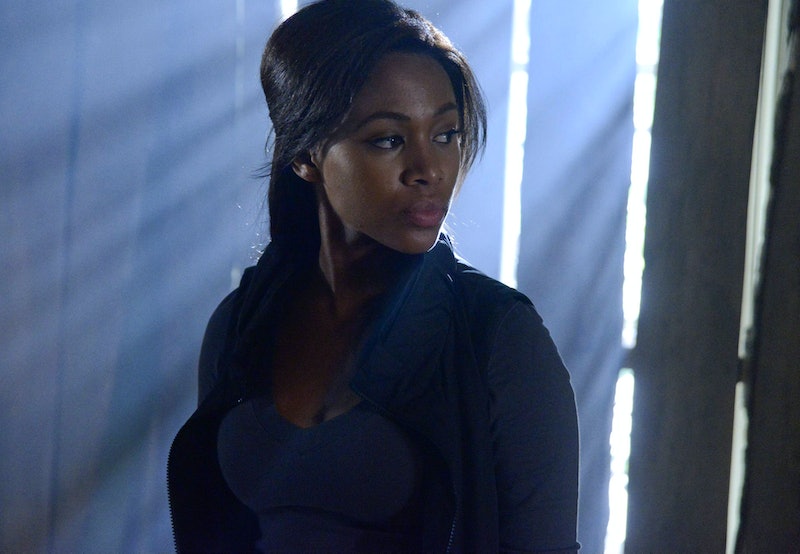 It's easy to make snap judgments when Fall TV first bestows the first few episodes of new series upon us. Some characters may appear boring, created only in the service of their counterparts. A few may seem altogether average. A lucky few seem great at first, only to improve with time. Now that we've had plenty of time to let this season's new offerings simmer and stew, there are a few who deserve a bit of applause (and of course, a regular spot in your weekly TV lineup).

But this year has offered up not only a few television gems, but some really fantastic ladies thrown into the mix, as well. It's no wonder, since we recently learned that things are really starting to turn around for ladies on the small screen. It's rather depressing that seeing a boost of female characters on TV means that only 43 percent of speaking characters are ladies, but it's something — and it's certainly better than the 23 percent of behind-the-scenes folks being women. Still, the best way to get more ladies on the screen and behind the scenes is to praise the ones who are doing it well. After all, if we watch them, the networks will give us more (series with awesome ladies, not actual ladies, because that would be Weird Science and that's not exactly what we're going for here). It's like a reverse Field of Dreams: if we come, they will build it.

A great place to start is a series that seemed utterly absurd for most of its early life. Fox's Sleepy Hollow seemed like a surefire flop from the moment its initial trailer played at the Fox Upfront last May. Here comes a show about a character from the 1700s, who's somehow been preserved perfectly so that he can come to life in 2013 and help a scrappy cop solve supernatural mysteries. Pass. But for some reason, I stuck with this wacky series — I can probably thank The Vampire Diaries and Buffy for acclimatizing me to ridiculous magical and demonic happenings — and lo and behold, a pretty interesting series has emerged. It takes a little suspension of disbelief and tolerance for historical exposition necessary for a mass market network show (some Americans need a refresher course on their own history — sad but true), but when you get down to it, Sleepy Hollow is part Indiana Jones, part History Channel, with a splash of cop show thrown in and it's got some killer women, to boot.

Namely, Lt. Abbie Mills (Nicole Beharie), who serves as Ichabod Crane's (Tom Mison) partner in crime. And when we say partner, we mean it. Mills is not Ichabod's sidekick nor romantic tension-provider. She shares ownership of the series equally with Crane, and in many ways outshines her handsome counterpart. She's a fantastic character who manages to be our realistic guide in a world that defies logic; where Crane takes each supernatural instance as a matter of fact obstacle (he's had time to process the madness), Abbie is on the same level as the audience. This stuff is new for her, and at times, she finds herself at odds with what she's seen and what she can bring herself to believe.

What's more is that she's added another protagonist to the slim list of women of color in leading roles on television. It's a step that Beharie has attributed to Shonda Rhimes and Kerry Washington, "She just literally, her and Shonda Rhimes with Scandal, just ripped open that hole…They made it known to the industry that this is possible," she told The Grio on MSNBC.com. And while the series doesn't bash viewers over the head with it, Sleepy Hollow does address questions of race — especially with regard to how someone like Crane, who comes from an era when slavery was legal, might have questions about how things have changed in 2013.

This technically isn't a new series, but since the Emmys treat it as a mini-series, we'll treat it as new — the characters are new to us, after all. What's wonderful about the witches, immortal beings, and nosy neighbors on AHS this season is the fact that not one of them truly deserves the title of hero. As Bustle explored earlier, even the most well-meaning characters like Zoe and Queenie exhibit behavior that suggests that within them lies the capacity for evil.

No one on the Ryan Murphy series is good or bad — even notorious torturer and murdered Delphine LaLaurie enjoys a few scenes in which her behavior threatens to make a sympathetic character. At times, it's almost as if her past self constitutes some sort of demonic possession and that the new Delphine is humbled and full of regret. With Angela Bassett's Marie Laveau, a character also ripped from history, we find a character whose motives are justified (witnessing eons of racism and violence has given her reason to strike against her enemies) but whose methods are ridiculously vicious.

On AHS this season, there are no villains, there are only varying capacities for evil and evil-doing. Through its bevy of complicated women, none of whom are definable by any blanket term or character box, AHS: Coven begs us to consider a question that's been debated for centuries upon centuries: are we all born with the capacity for evil? Are those who commit atrocities driven to wrongdoing by their environments and origins? Or are there simply bad seeds among us?

AHS: Coven's women aren't divided into the weak and the strong, the good and the bad. They're all allowed to exist in a realistic space (minus the magic, of course) where women are complex and curious, and that they too, can tread the line between the simplistic realms of good and evil.

Considering that the new Fox sitcom comes from the brains of Mike Schur and Dan Goor of Parks and Recreation, it was almost certain that the series would deliver us a few worthy ladies. However, after seeing the pilot, we weren't so sure. Andy Samberg's precinct mates Rosa Diaz and Amy Santiago seemed a little bland — Diaz was a hardass and Santiago was an annoying brown-noser. But as the season has progressed, and the characters have had time to stew, we've found that they're interesting, loveable characters (just like every lady on Parks and Rec).

Santiago's penchant for acting like the straight A student who always insisted on sitting in the front row originally appeared as nothing more than a foil for Jake's (Samberg) rakishness. Over time, it's blossomed into other relationships, getting her into a tiff with Diaz over a potential job as Captain of a New Jersey precinct or making her relationship with her own captain hilariously tense.

Diaz has her own bag of strangeness, including her terrible taste in pie and her nervous, yet terrifying courtroom demeanor. At one point, her character is brought in to convince kids from a troubled Brooklyn neighborhood to join a Junior Police Academy program after Santiago has failed because she's "tough" and the kids will respect her. However, when faced with a room of unruly teens, Diaz's gruffness is for naught. It's a hilarious moment of failure that contextualizes her character and allows her to be Diaz and not "the top cop from the neighborhood."

Then there's Gina, played by the hilarious Chelsea Peretti, who's just been completely insane since day one. Gina is a character who could only be played by Peretti, and it's exciting to see another fabulous, funny lady get her own answer to Parks' Tom Haverford (a character who actually owes many of his fantastic lines to former Parks and Rec writer Peretti).

Strong isn't new to SNL, but this season, she was promoted to co-anchor on Weekend Update, a.k.a. Seth Meyer's Dad Joke Extravaganza. It's a welcome return to the days of co-ed anchors like Tina Fey and Jimmy Fallon or Amy Poehler and Meyers. Strong took on the job that some of the world's favorite funny ladies have once held, and in the words of Poehler, "She's crushing it."

As part of a cast known for its lack of diversity and its lack of women, it's still a wonderful thing to tune into the sketch show each week and see one of the show's newer members not holding her own — because that would suggest some sort of struggle to match up to Meyers in the SNL boys' club — but flat out doing an amazing job. The series' sketches may be missing the mark this season, but Strong is one very good reason to keep giving it a shot.

The Wives (Past and Present) on Trophy Wife

We've praised this series quite a few times for its ability to take the ex-wife and young wife stereotypes, smash them up, and then play with the tiny pieces, but that doesn't make it any less important to reiterate. Malin Akerman, Marcia Gay Harden, and Michaela Watkins bring such hilarious complexity to their various embodiment of a well-to-do man's series of brides. Where Harden should be nothing more than a cold, controlling woman who drove Pete (Bradley Whitford) away, we find a woman who acts that way on the surface, but proves herself to be so much more than an unforgiving stereotype.

Where Watkins' character is the second ex-wife, who's more inclined to brew her own Kombucha and follow her various whims than lock herself into an unflinching life plan like Harden's award-winning surgeon, she's not just a loopy goofball who Pete couldn't hang onto. She's a vibrant, hilarious character who's given the chance to explore life as a single mother in a series that, despite its title, clearly has regard for her side of the story.

And of course there's Kate (Akerman), who's the titular trophy wife. She's young and a former party girl, so assimilating to family life is tough, but as the premise suggests, this is a series about getting to know her as a person, rather than tapping into the disgusting stereotype that every young, hot wife of a semi-wealthy man is a flippant gold-digger looking for a free ride.

Where there are usually unfair broad strokes, Trophy Wife paints with a finer set of bristles. Plus, there's the added bonus of encountering a show run by some of the behind-the-scenes ladies who make up that measly 23 percent: creators Emily Halpern and Sarah Haskins.

Virgina Johnson, The Lady Agents of S.H.I.E.L.D., and a Teen Queen

Rounding out the rest of the class are a few more fantastic ladies. First up, Lizzy Caplan as Virginia Johnson on Showtime's Masters of Sex. In contrast to so many TV dream girls, Johnson's appeal is her penchant for straight-talking and on occasion, even gruffness. Some have questioned the realism of the Showtime version of Johnson, but ultimately, we're given the Caplan version of the historical figure, and more Caplan is absolutely something television has needed for a long, long time.

Agents of S.H.I.E.L.D. gave us Ming-Na Wen as a kick-ass veteran of the super spy program, Chloe Bennet as a computer genius and hacker, and Elizabeth Simmons as a scientist and invaluable member of the team.

Finally, Reign delivers a teen drama heroine who manages to be the requisite center of a torrid love triangle (it's the CW, so it's unavoidable) without losing the side of her character that's focused on political gain and the sneaky games that will eventually lead her to become Mary, Queen of Scots.

The numbers may still tell us television is a man's world, but if the tides keeping shifting this way, that era is on its way to a close.