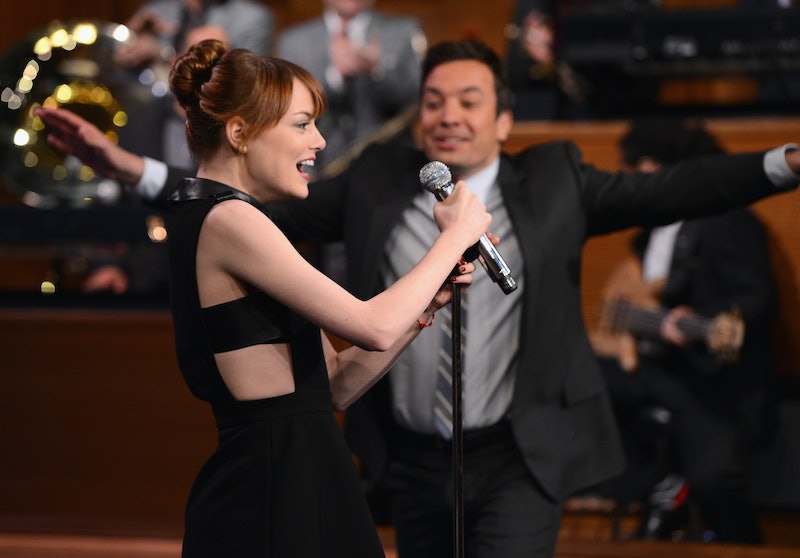 Late Night bits have gotten increasingly better since Jimmy Fallon took the reigns of The Tonight Show in 2014. The host turned what had seemed, for a while, to be a dying institution in American entertainment, and transformed Late Night into a viral video sensation. Soon, lots of hosts were jumping on board and creating content that was trending on twitter and getting thousands of views on YouTube. 2015 continued the trend, and we even got a spin-off show called Lip Sync Battle from one of Fallon's greatest bits. With such popularity surrounding these programs, I'm hoping they will only up the ante in 2016. And, honestly, it really does feel like Late Night spin-offs will be the one thing in entertainment that takes over in 2016.

Late Night hosts are on a roll this year. A lot of it is due in part trying to keep up with the bar that Jimmy Fallon has set so high. Fallon has done everything from having Michelle Obama on to doing the evolution of mom dancing to getting a spin-off show based entirely on one of his famous stunts. With the success of Lip Sync Battle show, one can only dream that it will open doors for more late night bits to come into 2016 TV. From The Late Late Show to The Daily Show, the bits done on late night television could all arguably make for great TV series in and of themselves, but there are a few that stand out above the rest that could really take off in 2016.

For instance, carpool karaoke on The Late Late Show with James Corden took on a life of its own this year. Who would have thought watching Justin Bieber drive around Los Angeles singing to his own music along with the late night host would have made for such a great video? And when Corden had Carrie Underwood on, it was just pure magic. Now imagine a half-hour show each week, in which we get to see our favorite musicians driving around town doing karaoke to their own music. You know you'd watch it. I know I'd watch. And is it out of the realm of impossibility? After 2015, and the success of Lip Sync Battle, not at all.

We're also much overdo for another prank show on TV, and I think Jimmy Kimmel would be the perfect man to host it. Anytime he does a prank on his show, one of his elaborate, well-thought out, and usually celebrity-filled pranks, the world becomes a slightly happier place to be in. Even if he's too busy hosting his talk show to host a prank show, I could see him signing on to one as a producer, because he knows what the people want.

Whether or not the networks decide to turn these bits into full fledged shows, I'm certain that 2016 will feature more hosts and more writers finding creative ways to get celebrities to do embarrassing things for the sake of entertainment. That's what it's really about, right? I loved watching tattoo roulette with One Direction on The Late Late show, but I enjoyed seeing Niall Horan freak out on national television even more. There is no trend bigger than our favorite stars being a silly on live TV. Here's to hoping that 2016 will bring lots of viral videos, and maybe a couple of late night spin-offs, because that would, indeed, be a very happy new year.