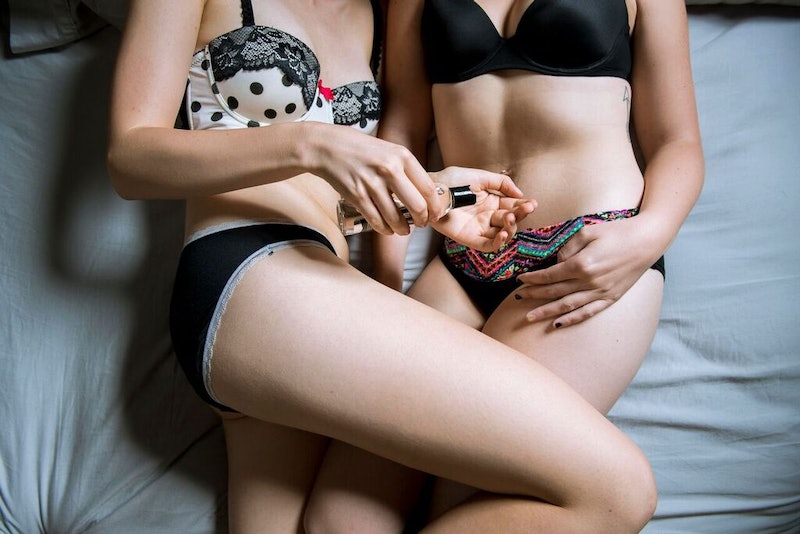 "I'll definitely take the story about how to have body positive sex," I told my editor as she handed out some possible assignments for the week ahead. At the time, I thought it would be relatively simple for me, a body positive writer and enthusiastic sex-haver, to come up with a million different ways to know that the sex you're having is in alignment with your body positive identity. When I sat down and started to brainstorm, however, it suddenly became clear that identifying the tenants of body positive sex was going to be a lot harder than I had thought.

First and foremost, I realized that writing something that could potentially reinforce the idea that you might be having sex The Wrong Way was not in line with my own views. From where I stand, there is no one way to tell if you're having The Right Sex, body positive or otherwise. Sex is such a nuanced, individualized experience, and yet another article about what you should or should not be looking out for during intercourse could do more harm than good. In other words, those old issues of Cosmopolitan have got that area covered.

But there was more gnawing at me than that. In addition to my discomfort with the idea that anyone should be checking off boxes during sexual experiences, I wasn't quite sure that I was having body positive sex, whatever that even means, myself.

Friends who know me well, and partners who have known me in the biblical sense (LOLZ) likely understand that I have never been particularly prudish or self-conscious in the bedroom, despite the fact that my plus size body sometimes tells me I should be. All the lights off, a flowing negligee to cover up my "problem" areas, and a guy who's probably only doing this because he feels sorry for me: Those are the narratives of fat girl sex that society would have us believe and perpetuate.

In spite of that, I've found confidence in the empowerment of the women who have cum before me, and for years, I let that confidence show in the bedroom. This, combined with the fact that like any other young horn-dog (or should I say, horn-pup), I like sex (lots of it, in all manner of incarnations and with all different kinds of people) has meant that the experience has always felt predominantly positive. In my younger years, I never had time to worry about whether or not the sex I was having was body positive, because I was too busy having sex to figure out how I felt about it or why I felt the way I did.

I'm a little older now and a little more subdued in the bedroom. I also have a longterm boyfriend who I've lived with for three years, and as such our sex life has transformed into the type of thing they make fun of in the movies but that is actually really great: Respectful, less absurdly urgent than it used to be, and only when we aren't distracted by our books or Netflix. In other words, bliss.

Still, in recent months, I haven't been enjoying sex as much. Despite the fact that women are "supposed" to achieve supreme confidence and comfort with their bodies as they age, I've found myself more worried about it than ever. More and more, I see myself slowly reaching my hand down towards the sheets, pulling them over me to hide my body. I let the lights stay off and my clothes stay on, and I don't feel like I can let myself entirely enjoy the moment. Once or twice, I've even said "don't look" to my boyfriend when I felt his eyes lingering on my midsection for too long.

So as I sat down to write an article meant to tell readers about what body positive sex should look like, it dawned on me: Body positive sex isn't actually about sex at all. It's about how you feel about yourself while you're having it.

Body positive doesn't have to be about leaving the lights on, or going fully nude, or allowing your partner to touch your body in places that would normally make you feel uncomfortable. It doesn't have to be about finding out what your partner likes and mastering it, or asking them to find out what pleases you (although both of those discussions are highly recommended).

These things are simply preferences you have about sex, and they can absolutely be independent to how you feel about yourself. Someone with the utmost self-love and admiration for their bodies can prefer to fuck with the lights off, just like a self-conscious person might find empowerment in disengaging by letting their asses fly about wildly in a well-lit, mirrored room.

So like nobody can tell you what you should or shouldn't expect or look for during sex, no one can dictate how you feel about yourself by the way you're having it. There is no magic formula, and you won't be able to determine the presence of a body positive sex life by checking off a bunch of boxes. If you want to have body positive sex, you've simply got to figure out how to be a more body positive person.

And just like sex, there's no wrong way to do that either. You might make progress with yourself and see it manifest in the bedroom, and then realize that the next day you're right back to where you started. That's the nature of this seemingly-endless journey to total self acceptance, and thus the nature of totally self-loving sex.

If you've already arrived at that point, congratulations. But if not, just know that plenty of other people are right there with you, each of us trying to, well, get off on ourselves first.