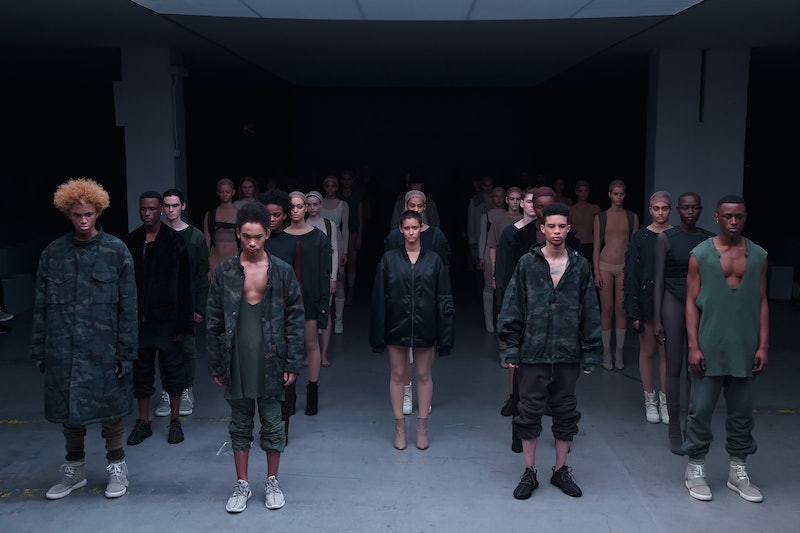 If you're not a member of the Kardashian-Jenner clan, there's a strong possibility that you've had a hard time getting your hands on the ultra popular, ultra stylish Yeezy 350 Boosts. On Tuesday, the latest of the sneaker's colorways premiered, but what color do the Yeezy 350 Boosts come in? It's definitely more than the tan that was released this month. In fact, from my extensive research on the subject, I've unearthed four colors for the ultra chic sneaker. The real question, however, is whether or not you'll ever be able to locate and purchase the coveted shoe — especially since the tan colorway is selling for more than double the original cost.

The Kardashian-Jenner clan has been rocking the shoe ever since it's original reveal back in June. Kylie Jenner took to Instagram to showcase her early access to the shoe writing, "Early bird catches the worm." Rocking the black and white pebbled sneaker, she inspired envy in sneakerheads around the country. Big sister Kim was also spotted rocking the ultra-chic shoe at Disneyland as well, because when you've got connections, you've got connections. Unlike their predecessors, these shoes feature a low-top design that seems to be just as popular as their high top origins, and while Kanye may have changed up the design a bit, one thing remains constant: Kanye loves his neutrals.

So how many colors do the highly coveted Yeezy 350 Boosts come in? According to an unofficial Instagram page, four, but come 2016, six more colors are set to debut so you should consider siting by your computer starting...now.

The Turtledove colorway is the original, and more than likely, one of the most well-known. As the first to launch, it's got a seriously covet-worthy status.

The 350 Boost in Moonrock sold out in mere minutes during its November launch. The slate shoe is super chic, and the pebble appearance perfectly coordinates with its predecessor.

The pirate black sneaker is a bit more elusive than the others. While the shoe is pictured all over the web, they seem to be nearly impossible to buy. If you were one of the lucky ones to nab this shoe, well, you kind of hit the jackpot.

The latest installment of the Yeezy 350 Boost debuted two days ago to crazy acclaim, and it makes total sense. For me, this colorway is the most Kanye and harkens back to his runway show.