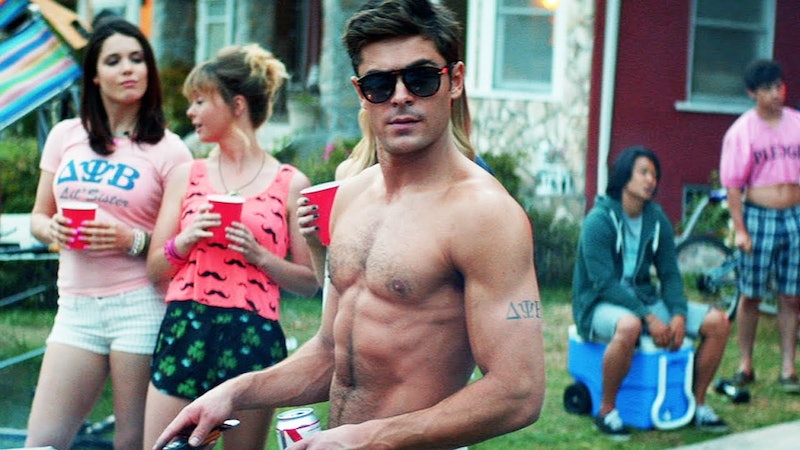 I just want it to be known before I begin that I object to objectification. Really, I do. But you can't deny that, when it comes to objectification in media, it's overwhelmingly women being viewed through the male gaze than men being viewed through the female gaze. That's why I find films like Neighbors so refreshing, because it seems to be a vehicle to give us as many shirtless scenes of Zac Efron as legally possibly under the film's ratings. And I'm not mad about it. In fact, in this first Neighbors 2 photo, we not only get more male nudity than we do female nudity, but it has something to appeal to all audiences. Except, I don't know, children, but who would take a child to see Neighbors?

In the photo, a shirtless Efron and Seth Rogen are standing with two women and another man; one of the women is dressed as a cheerleader, one is wearing a pink jacket and a bob that makes me think of Grease, and the man is wearing what appears to be a clown head. From this, I'm guessing that some kind of costume party was happening, one that has been interrupted by whatever the group is staring at off-camera. However, the best part of the picture is the fact that Efron's abs are on display since he's wearing nothing but short, bright orange shorts — and Rogen appears to have drawn a six pack on his own stomach to match.

So, basically, from this one still alone, we get all the shirtless Efron we could possibly want, while simultaneously getting a good idea of the kind of humor that Neighbors adores. The fact that Neighbors 2 plans to live up to the good-natured fun of Neighbors, and that female characters are almost equally represented in this first still despite the movie begin, at the end of the day, really about Rogen and Efron, just warms my heart. Now, all I need is a promo picture of Rose Byrne being awesome, and I'll really be happy.

Check out the image below.