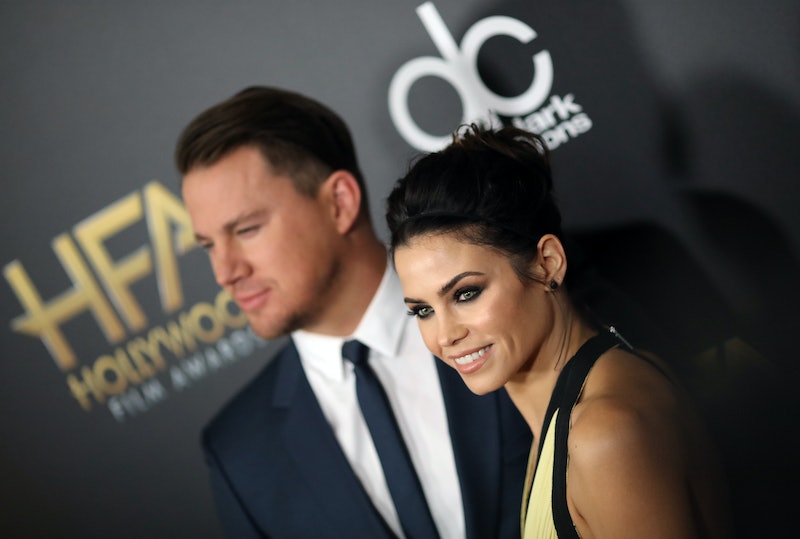 In the world of news that I want to be true more than anything, OK! is reporting that Channing Tatum and Jenna Dewan-Tatum are expecting a baby, making the pair parents for the second time after the 2013 birth of their daughter Everly. The pair have discussed how ready they are to have a second child in the past, but to know that they may have actually succeeded in getting pregnant again just warms my heart. Nothing is confirmed yet, as neither Tatum nor Dewan-Tatum have announced the news themselves, but an In Touch magazine source has been quoted as saying that the two are "already in total baby bliss." If that's true, then excuse me while I scream.

The couple have discussed their readiness to expand their family as recently as August 2015, when Dewan-Tatum told E! News, "Yeah, yeah, [I want to have more children]! I don't know when, but we definitely want to." She also called Tatum an "amazing father," which goes adorably well with the time that he called her a "super mom" during an interview with Vanity Fair. Basically, if there's any celebrity couple out there right now who are beyond ready and beyond capable of juggling more than one child, it's the Tatums.

I'm waiting for a more official confirmation before I start throwing a baby shower for Dewan-Tatum (who... won't attend, because she doesn't know me), but, for right now, I'll just keep my fingers crossed that it's true. When you're as amazing as Dewan-Tatum and Tatum are, then you deserve to have everything you want. And what I want is for Channing Tatum to bring another child into this world in the same year that he dresses like Elsa to sing "Let It Go" on Lip Sync Battle. It just seems like the perfect time.

More like this
Is Queen Elizabeth II Or The Royal Family In Netflix’s 'Harry & Meghan' Docuseries?
By Jake Viswanath
Archie & Lilibet Are Eligible For Royal Titles — But There's A Catch
By Jake Viswanath
Larsa Pippen Is Reportedly Dating The Son Of A Legendary NBA Player
By Jake Viswanath
More Jodie Turner-Smith, Please
By Erin Somers
Get Even More From Bustle — Sign Up For The Newsletter