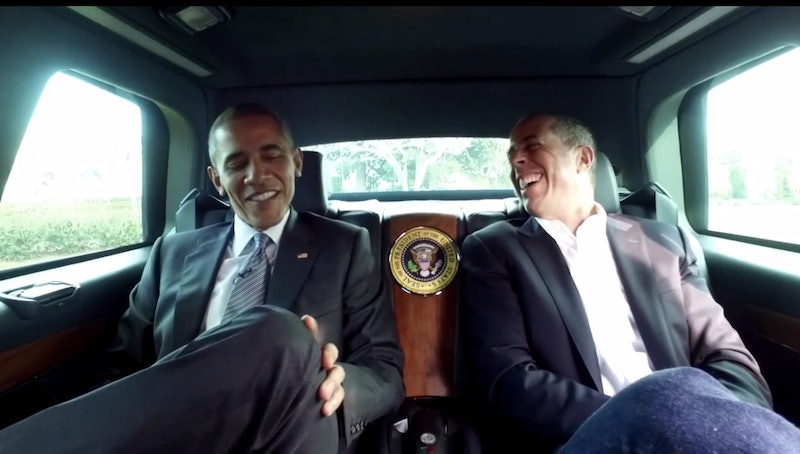 As President Obama embarks on the final year of his presidency, he's becoming increasingly chill. He gave Kanye West some clever advice about running for president. He threw shade at Republican presidential candidate Donald Trump. He's seen Hamilton twice this year. And Obama appeared on Comedians In Cars Getting Coffee with Jerry Seinfeld. It's hardly the first time that Obama has kept company with a comedian. He appeared on Zach Galifianakis's Funny or Die show, Between Two Ferns. He went golfing with Larry David, and he used Keegan Michael Key as his "anger translator" at the White House Correspondents' Dinner. So it seems only fitting that, in his last year as commander in chief, Obama would lean into the comedy world a few more times.

It's easy to forget how legitimately funny the president can be, what with him leading the country and all, but he continually holds his own among comedy heavyweights and his encounter with Seinfeld is no exception. While the unlikely duo couldn't actually leave the White House grounds because, well, one of them is kind of high profile, they did roam around America's most famous residence and did sit down for a cup of java. Here are a few of the best moments.

The president said that he does really well with the '08 demographic. "They love me," he said. He attributed his success with America's children to his big ears, which he said make him look like a cartoon character, and the fact that they like saying his name. He's a very self-aware guy.

Obama and Seinfeld briefly talk about the negative aspects of fame and notoriety. The president, ever a wise man, said that "anonymity is not something you think of as being valuable," until you don't have it anymore, that is. He said he would love to be able to take a walk on his own and just sit on a bench. Ah, life's simple pleasures.

When an aide hands Obama a drink, he takes a sip and then says "that's just a little gin," because he's the coolest. The joke literally causes Jerry Seinfeld, a comedy legend, to double over laughing. Even Obama giggles at his funny while his staff tries to duck out of view. It's really great.

4. Obama Expressing His Confidence In His Morning Routine

Seinfeld asks the president to talk him through his morning routine. He gets a wake-up call, brushes his teeth, shaves, works out, and then showers. Seinfeld questioned the order of shaving before working out, and the president, ever the baller, said, "That's how I do it, and I don't really need a reason."

5. Seinfeld Asking About Sleeping In The White House

While Seinfeld is brewing some coffee, he asks Obama if he can really get a good night's sleep at the White House or if it's like Night At The Museum. Obama admits that the first night was. He talks about going through the election and the inauguration (he uses the word "hoopla" and then coming home to the White House. "You're looking around thinking, 'what the hell is this?'" he says. He's nothing if not honest.

He's not like a regular president. He's a cool president. And, apparently, he knows it. When he and Seinfeld start talking about suits, Obama admits he doesn't like to wear black, saying: "Well, I'm a cool president, so..."

Seinfeld asks Obama what his go to snack is and, before he can even finish the question, the president says "nachos." He says that nachos are a food that have to be taken away from him, because he would keep eating until he had, and I quote,"guacamole coming out of my eyeballs." He's the best.

Looks like we know what somebody got for Christmas! Obama doesn't have time to check his iPhone. He needs the convenience of a smart phone on his wrist. But, seriously, he was right when he said he was a cool president and this wearable tech accessory proves it. Obama is the coolest of them all.

The full episode is available here.

Images: Comedians In Cars Getting Coffee (9)

More like this
What Is Barack Obama’s Net Worth? He Makes *Way* More Now As An Ex-President
By Hugh McIntyre
Yes, Billboard Queen Angelyne Really Ran For Governor Of California
By Brad Witter
8 Mick Carter Moments That Made 'EastEnders' History
By Niellah Arboine
10 Times Diana & Meghan Spoke Similarly On The Royal Family
By Sophie McEvoy
Get Even More From Bustle — Sign Up For The Newsletter