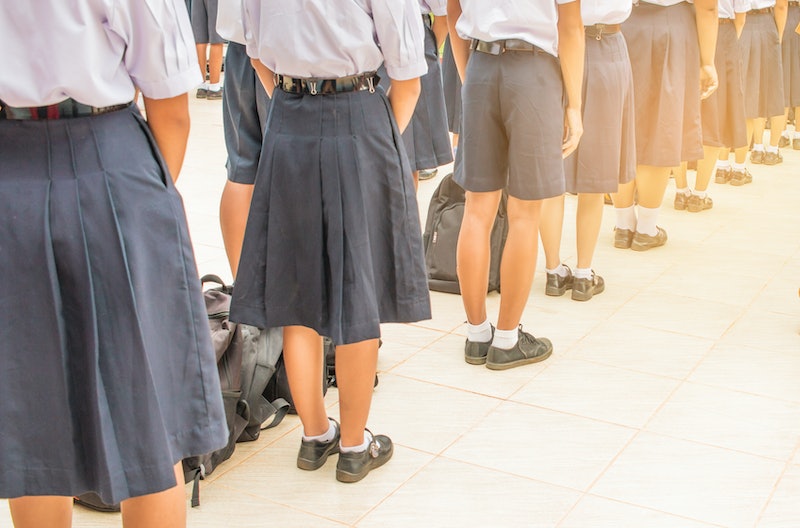 High schoolers today have a lot on their plates: Between studying for classes, applying for college, and juggling extracurriculars, there isn't a lot of down time. The extra issue many, many young women have to worry about? Dress codes. But the question remains, do school dress codes work? Do they really do what they're "supposed" to do — that is, improve academic performance at school — or are they causing harm instead? Liz Plank's Flip the Script video on girl's dress codes sheds further light on this issue as she interviews Kentucky high schooler Maggie Sunseri about her school's restrictive dress code, how that made Sunseri and her friends feel, and what they did to change it. Plank also does a little experiment of her own, inspired by some of the shockingly strict parameters of Sunseri's school's alleged dress code.

Dress codes have been controversial for a long time. After all, most everyone values their freedom of expression. Beyond that, most everyone values feeling comfortable in what they're wearing. For women, however, the issue of dress codes takes on additional layers of complexity. In an overwhelming majority, women are judged on their appearance, valued on their perceived purity, and objectified based on their physical appearance and how they dress. While these issues affect many women for their entire adult lives, it doesn't start when young women leave high school and exist in the adult world — it starts much, much earlier than that.

Punishments for violating dress codes can be humiliating for young women. As one of the girl's in the video points out in her discussion with Plank, "I am here to learn. I am not here to have you measure me." She makes a very important point: What message does it send to girls when they're routinely taken out of class because of the length of their skirt or the width of their shirt straps? Certainly not one that speaks to the importance of their education, or their value as a person on the inside.

On the topic of dress codes, Marinda Valenti at Ms. points out that "these restrictions are executed with distracted boys in mind, casting girls as inherent sexual threats needing to be tamed." As a society which already sexualizes women, school-enforced policies which may contribute to the same structural problems are not a good thing.

Restrictive dress codes may send negative messages about women to boys, as well. Michael Kasdan at The Good Men Project discusses the message dress codes send to boys in simple terms: "What we are saying to boys is that girls are a distraction to you, that you cannot and are not be expected to control yourself and your hormones." And that's exactly right: When we hyper sexualize young women and micromanage their bodies in an effort to conceal and cover them, we send a message to boys that they are too distracted to focus on their coursework as a default setting. That's as disrespectful to them as it is to the girls whose bodies these policies attempt to police.

So, what was Sunseri's school's super strict dress code? Allegedly, no visible collarbones, no shoulders, and no skirts or shorts above the knee were allowed. Sunseri advocated for the dress code to be amended to shorts and skirts being fingertip length (which is a common and sometimes controversial dress code standard in itself); the school allegedly decided on a credit card length measurement instead — that is, that the clothing could stop no higher than a credit card's length above the knee. I know, credit cards are a weirdly specific length, right?

Regardless, it is progress, and you have to admire Sunseri and her friends for taking a stand against sexism and advocating for themselves and their peers. With Sunseri already mobilized, what was Plank's plan? She did a little experiment of her own, excerpted below:

The Great Collarbone Reveal of 2015

Plank administered a math test to two 18-year-old boys while wearing a blazer over her shirt, effectively covering her collarbone. She then administered a second math test to the same two boys, and took off her blazer. Underneath, she was wearing a long sleeve blouse which dipped a bit in the front, revealing her collarbone. At the end of the second test, she asked the boys if they noticed any differences. Did they notice her newly revealed collarbone? Unsurprisingly, they did not.

Maggie herself puts it pretty plainly: "our bodies are sexualized at every turn." As women, objectification can happen pretty constantly throughout our lives, and the struggle to feel confident and in control of our own bodies and presentation can feel exhausting. Maggie and her friends, however, are a great example of what results can happen if you take the leap and advocate for change. Fighting for respect and equality are not easy tasks, but sophomore Maggie Sunseri takes them on in stride, and is a great source of inspiration for us all when it comes to combating every day sexism.