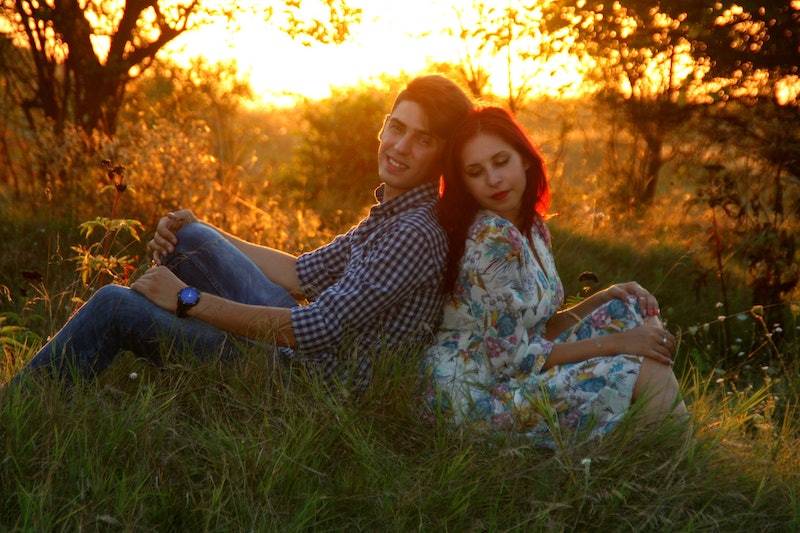 This morning after an accidental hot yoga class (the regular vinyasa was sold out), my friend deadpanned what she learned about relationships in 2015: "They move in never-ending circles, following the same patterns over and over and over again. There's no way out." We laughed about it, delirious from the amount of sweat we'd just produced, but it turns out she's right, at least in part. Of the many studies and surveys about relationships released in 2015, one of them delved into just that topic: Apparently, we all fall into one of four relationship styles.

But more on that later. Now that 2016 is here, it's worth pausing to take stock of our relationships, current and past, and setting an intention for where we want to go in this next year. (Or at least that's what I always do — I'm super romantic, and I always wax reflective as a new year dawns.)

What did we learn about our relationships in 2015? What did studies find about relationships in these modern times? And how can we use that information to better inform the coming year? Here are 10 particularly helpful bits of relationship research from the last year.

1. We Really Do Have Patterns In Relationships

One study, published in the Journal of Family and Marriage , found that each of us generally fall into one of four distinct relationship styles, which are related to how long each of our relationships will last. So even though my friend's bleak comment about relationship lessons of 2015 was made in jest (though some, like Freud, might argue that there's no such thing as a joke), it turns out that there actually is some truth to it.

2. Happiest Couples Have Sex Once A Week

Contrary to popular belief, there is no need to have sex constantly to keep the romance alive. In fact, this study found that the threshold for sex-related happiness (or happiness-related sex, for that matter) in long-term relationships is once a week. Research published this year by the Social Psychological and Personality Science found that happiness generally increases with "more frequent sex, but this is no longer true after couples report engaging in sex more than once a week," says lead researcher Amy Muise. And this is true across the board: "Despite common stereotypes that men want more sex and older people have less sex, there was no difference in the findings based on gender, age or length of relationship. "Our findings were consistent for men and women, younger and older people, and couples who had been married for a few years or decades," Muise reports.

3. Your Credit Score Might Predict If Your Relationship Will Last

If your credit score is high, there's a better chance that you'll enter into a committed relationship — and stay in one, found one study, published in a working paper from the Federal Reserve Board. There's also a link between similar credit scores and long-term relationships. If you have any, maybe now is the time to sort it out.

4. 36 Questions Really Could Make You Fall In Love

It's an old study, but it came back with force after an essay in the New York Times' Modern Love column this year detailed one woman's experience with research that asked if it was possible to make two people fall in love with each other. The method: Have two people who are not romantically involved ask each other a series of 36 questions and stare into each other's eyes for four minutes afterward, and see if they fall in love. She tried it, and it worked for her, albeit not under totally controlled circumstances. (The original study is here, in case you're curious.)

5. Cell Phone Use Can Damage Relationships

It's official: According to one study, cell phones are bad for romance and lead to higher levels of depression. The research, published in Computers in Human Behavior, found that "cellphone use can undermine the bedrock of our happiness — our relationships with our romantic partners," says researcher James A. Roberts.

Mad people are sexting, says a new study, and it's making them happier. Co-authors Emily Stasko and Pamela Geller found that there is a "robust relationship between sexting and sexual and relationship satisfaction" in a study that analyzed 870 people from 18 to 82 years old.

P.S.: Eighty percent of those 18- to 82-year-olds had sexted in the past 12 months. So, yeah, sexting is on the rise. And it's making us happier. So there's one way cellphones can accentuate relationships.

7. Men May Be More Likely To Cheat

A British study found that there's a better chance men will sleep with someone who is not their partner, according to a paper published in Biology Letters. The survey of 1,314 people also looked at something called the "2D:4D" ratio, which basically says that the length of someone's ring finger in comparison to their index finger might correlate with how likely they are to cheat.

8. Gratitude Is The Key To A Successful Relationship

Just be grateful for your partner, and express it often. A study published in Personal Relationships found that "positive relationship outcomes appear to be associated not only with being appreciative and possessing gratitude for one's partner, but also feeling appreciated and receiving gratitude back," the study reported. The Rutgers study, which surveyed 468 married couples, stresses that mutual thankfulness is the key to long-lasting, healthy, happy relationships.

9. Physical Instability Makes Us Feel Unstable In Our Relationships

This one is fascinating. Researchers at the University of Pittsburgh and the University of Waterloo asked people who were in committed relationships sit in a wobbly chair. Then they asked these people questions about their relationships — things like, “How confident are you that your partner will be together in six months?" and “How satisfied are you in your romantic relationship?” They asked the same questions of the other half of their participants, also in committed relationships, but had them in a stable chair. The results: People who felt physically wobbly were more likely to report less satisfaction in their relationships.

10. Our Friends Determine Whether Our Relationships Will Last

Your friends' opinions of your relationship are more important that that of your family or colleagues, found a study published this year in the Journal of Family Psychology. The study found that relationship stigma from friends is associated with "lower relationship commitment, trust, love, and sexual communication, as well as greater odds of intimate partner aggression victimization." If your friends love your partner, good news: There's a good chance he or she will be in your life this year. Cheers!