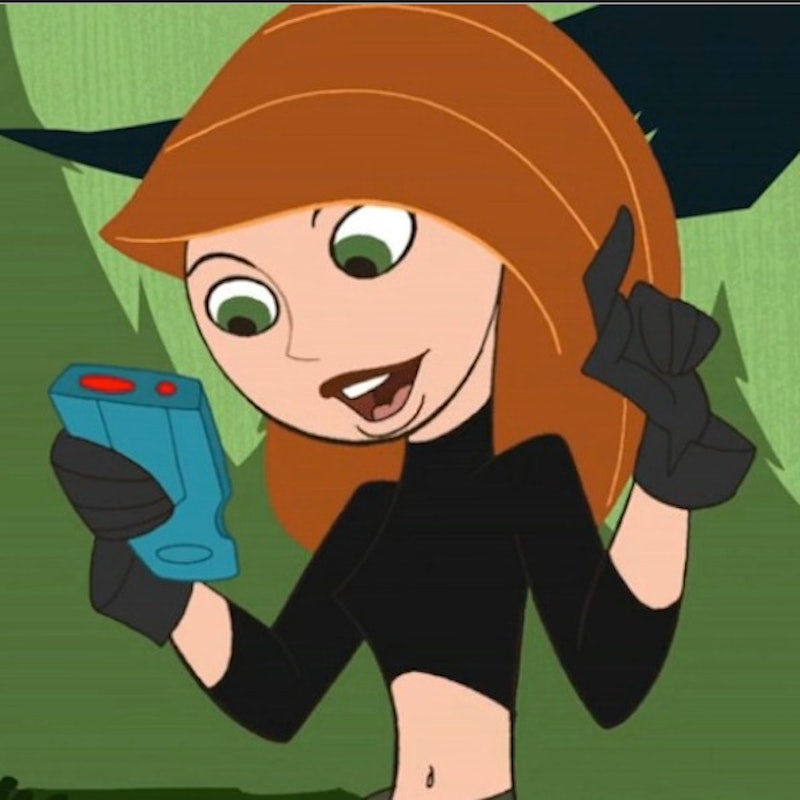 Before you say that there were no strong female characters on television growing up, you need to revisit the Disney Channel classic that was Kim Possible. The show followed a girl with the last name "Possible," who was a cheerleading high schooler by day and a badass crime fighter by night. She would save her friend Ron from trouble (That's right, he was the "Impossible" factor in this show) and faced countless villains on what seemed like a daily basis. And, of course, Kim was still able to remain absolutely fabulous throughout it all. Basically, Kim Possible was (and still is) the best show ever.

The show appealed to both boys and girls with its countless episodes full of action, romance, and just your everyday high school drama. Can it get any better than that? Kim was nothing less than goal-worthy (and being voiced by Even Stevens' Christy Carlson Romano definitely helped). However, we don't see many shows like that one on Disney Channel anymore. In the recent days of corny sitcoms, reflecting back on Kim Possible really makes us miss the days when Disney actually aired quality cartoons. So, let's just take a trip back in time to distract ourselves from it all.

1. She Inspired A Generation of Text Tones

We all know at least one person who has had (or still has) the Kim Possible tone as their text tone. And why not? It's awesome. Plus, we now have video chat on our phones too. Kim was just ahead of the game.

2. The Budding Romance Between Kim and Ron Was The. Best.

How could you not ship Kim and Ron? Best friends turned romance is always a yes in my book.

3. Kim's Parents Were The. Coolest.

They never questioned Kim's whereabouts, and always understood the important parts of raising a teenager.

4. Rufus Was The Naked Mole Rat You Actually Wanted

Have you ever seen a real naked mole rat? Yeah, they're pretty weird looking. But Rufus was not only cute, but also hilarious. I would share my Nacos with him anytime.

Yeah, that's right. I posted the video. Prepare to have it stuck in your head all. day.

6. Wade Was Awesome... And He Never Left His Room

Wade probably had a severe Vitamin D deficiency. However, he was a genius behind a computer with a tech job that some Kim Possible watchers will probably find themselves in today. I mean... We did grow up in the age of evolving technology, right?

7. Even The Villains Gave Us Goals

8. They Understood The Perfection That Is Tacos And Nachos

Did anyone else get insanely hungry while watching this show? Seriously, I would've ordered a Naco every time they ordered one. Because this show really did understand the beauty that is study break trips to Taco Bell.

9. The Catch Phrases Were Oh-So-Catchy

Odds are you've answered the phone saying "What's the Sitch?" at some point in your life. Or maybe you've screamed "Boo Ya!" — Because, why not? People really need to start saying these things again.

It's no wonder why Ron didn't want to go back! If there's one episode of Kim Possible that you remember... It's probably this one.

Ron can be a cheerleader. Kim can fight bad guys. Her mom can be a surgeon. It didn't matter, and it never should. And Kim Possible always knew that.

Kim definitely didn't go to an all-white high school. And, no matter what a character's skin color or background was, they were accepted. Way to go, Disney!

13. Kim Was A Straight Up Badass

Between that outfit and that entrance... Who wouldn't want to be her? I'm pretty sure Kim was my Disney role model growing up. She was basically a female superhero.

14. Her Hair Was Perfection

Despite all the times she had to fight off the bad guys, Kim never managed to not look flawless. Can my hair look like hers? ...Please?

15. Kim Possible Just Got Us

Enjoy the Kim Possible marathon you're totally going to have after this.