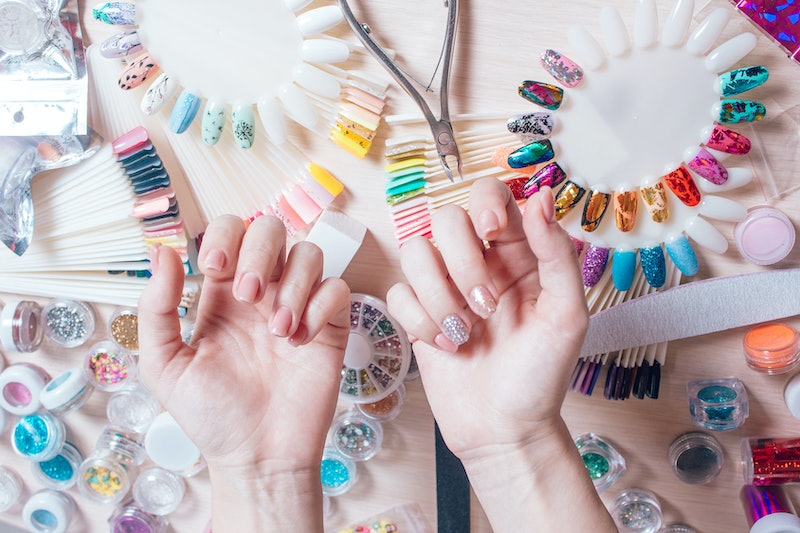 Getting your nails done is a fun little luxury for many people, but over time, the cost can add up. However, there are a few ways to save money at the nail salon that'll get you the polished mani you're after without spending a good chunk of your paycheck over the course of a few visits. If you're a nail salon devotee, your wallet will thank you for these hints.

The average manicure in the U.S. costs between $19 and $22, according to DailyFinance — and that's for a basic service. If you're opting for gel polish or acrylic nails, expect your price to jump. Buying all the tools for a DIY manicure will cost you about $50 initially, celebrity nail pro Roxanne Valinoti told the site, but it'll obviously save you some green in the long run.

I get it, though — sometimes, you just want someone else to take the reigns, or in this case, the polish bottle. Going to a nail salon is no fuss, no muss. There's no risk of accidentally ruining any nails by trying to clean up around the edges of another, and there's no need to worry about going all the way to the edges (which often leads to the former debacle.)

If you're not willing to give up your salon-perfect mani but are looking for a few ways to save some dough, here are eight money-saving nail salon hacks to turn to.

If you're not devoted to one particular salon, coupon and deal sites, like Groupon and Living Social, can be a great place to check for deals in your area. Nicer salons with higher prices often offer deals that bring the cost closer to a less fancy nail joint, so if you're looking for a relaxing spa-like experience instead of an in-and-out service, this is the way to go.

Cut Back On Fancy Salons Splurges

If you normally hit up a fancy-schmancy salon for a manicure every two weeks, consider switching your go-to to a cheaper salon. There are so many hidden gems out there that offer lower prices for a similar quality manicure — just give your new spot a Google first to read reviews and make sure they use hygienic practices.

According to Oprah.com, picking out a nail polish bottle that's more than 3/4 of the way full or asking for a new one is one of the best ways to extend the life of your manicure. This reduces the chance that you'll be getting a mani with an old, thick polish, or worse, on that's been thinned out.

BYOB (Bring Your Own Bottle)

Another way to avoid low-quality nail polishes? Bring your own. This way, you know that it hasn't been thinned out. Plus, you can touch it up at home if you own the bottle, so you don't have to go in for a new mani or take it off before it's time.

Ask For A Polish Change

If you don't need all the bells and whistles of a full manicure, ask for a polish change instead — it's quicker and much cheaper. Sure, you won't get the cuticle treatments, buffing, or hand massage (oh, the blessed hand massage), but just getting a polish change at every other visit will save you serious cash.

Many salons offer manicure and pedicure packages at a steep discount from the individual services added together. Of course, they're more expensive than an individual service, but they're cheaper in the long run if you tend to come in at separate times for each (or if you go to a salon that doesn't offer a package deal.)

Remove Your Acrylics Or Gel Polish At Home

If you're over your acrylic nails or gel polish, no need to go into a salon and pay a fee to get them soaked and removed. In fact, when it's done correctly, you can even make it healthier and more painless at home. After trimming your nails down, make sure you take enough time to soak them in the acetone so they come off without a struggle using a cotton ball or tweezers. Care for your nails and the skin around them afterwards with moisturizer and cuticle oil, according to StyleCraze.

When you're considering salon service prices, mentally include the tip before you make a decision. A $15 service will be $18 with a 20 percent tip, and a $25 service will actually run you $30. Before you make an appointment, think about how much you'll tip and whether you're willing to spend the total amount on your mani.

More like this
10 Makeup, Hair, & Skin Care Gifts That Beauty Lovers Will Drool Over
By Erin Stovall
All The Products Hailey Bieber Used For Her Birthday Makeup Look
By Olivia Rose Ferreiro
Superdrug Now Sells UOMA’s Sister Brand
By Justine Knight
This Scandi Beauty Brand Is Basically Hygge In A Bottle
By Justine Knight
Get Even More From Bustle — Sign Up For The Newsletter